Introduction: Endometrial blood flow reflects uterine receptivity. A study was done to look for a better predictor of endometrial receptivity with a novel 3D technique.

Materials and Methods: Prospective cohort study was done on 203 women undergoing frozen embryo transfer (FET) cycles in a tertiary care center for a period of 2 years from November 2018 to November 2020 to see the correlation of endometrial and subendometrial blood flow assessed by 3D power Doppler. Various indices endometrial volume, subendometrial volume and their vascularization index (VI), flow index (FI), and vascularization flow index (VFI) were obtained and compared between the pregnant and nonpregnant groups. The primary outcome was clinical pregnancy and ongoing pregnancy rates.

Conclusion: Endometrial and subendometrial vascularity by 3D power Doppler can be a useful novel parameter in predicting pregnancy in FET cycles.

Frozen embryo transfer accounts for 45–50% of all childbirths in ART.1 Various methods have been adopted for the evaluation of endometrial receptivity. Noninvasive methods include assessment of endometrial thickness and volume, endometrial blood flow, endometrial pattern, Doppler study of uterine arteries and. The accuracy of the 3D volume assessment method is more than the 2D-volume estimation, with an error estimation of 7% and 22%, respectively.2 Angiogenesis plays an important role in reproductive processes such as follicle growth, corpus luteum formation, endometrial growth, and implantation. A good endometrial blood supply is an essential requirement for implantation. So, do the endometrial and subendometrial blood flows measured by 3D power Doppler ultrasound have any role as the predictive factors for pregnancy during FET cycles?

To date, very few studies have reported on this question and it needs further evaluation. With this in mind, the present prospective study was designed to study the role of endometrial and subendometrial blood flows measured by 3D power Doppler ultrasound in artificially programed FET cycles.

To study the role of endometrial and subendometrial blood flow measured by 3D power Doppler as predictors of pregnancy in FET cycles.

It was a prospective cohort study done on 203 patients in the department of Reproductive Medicine & Surgery, Sri Ramachandra Institute of Higher Education and Research, Chennai (India) for a study period of 2 years from November 2018 to November 2020. All patients undergoing the frozen-thawed embryo transfer cycle were included with the following selection criteria:

The ultrasound machine switched to 3D mode with power Doppler. The sector of interest covering endometrial cavity in a longitudinal plane of the uterus was adjusted, and the sweep angle was set to 90 to ensure that a complete uterine volume including the entire subendometrium could be obtained as shown in Figure 1. 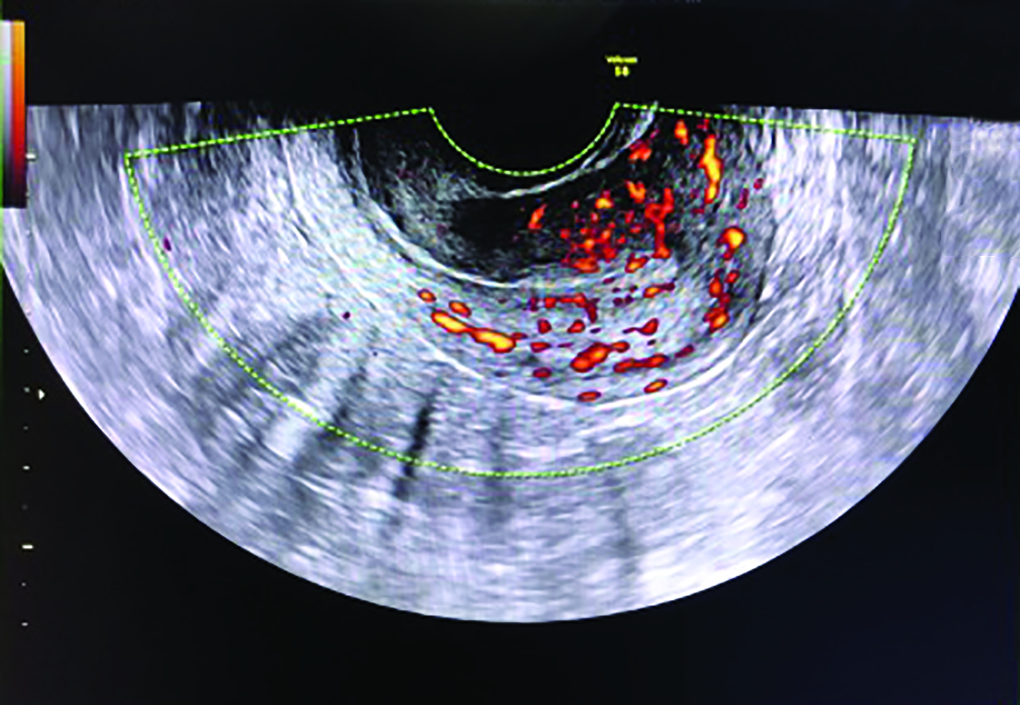 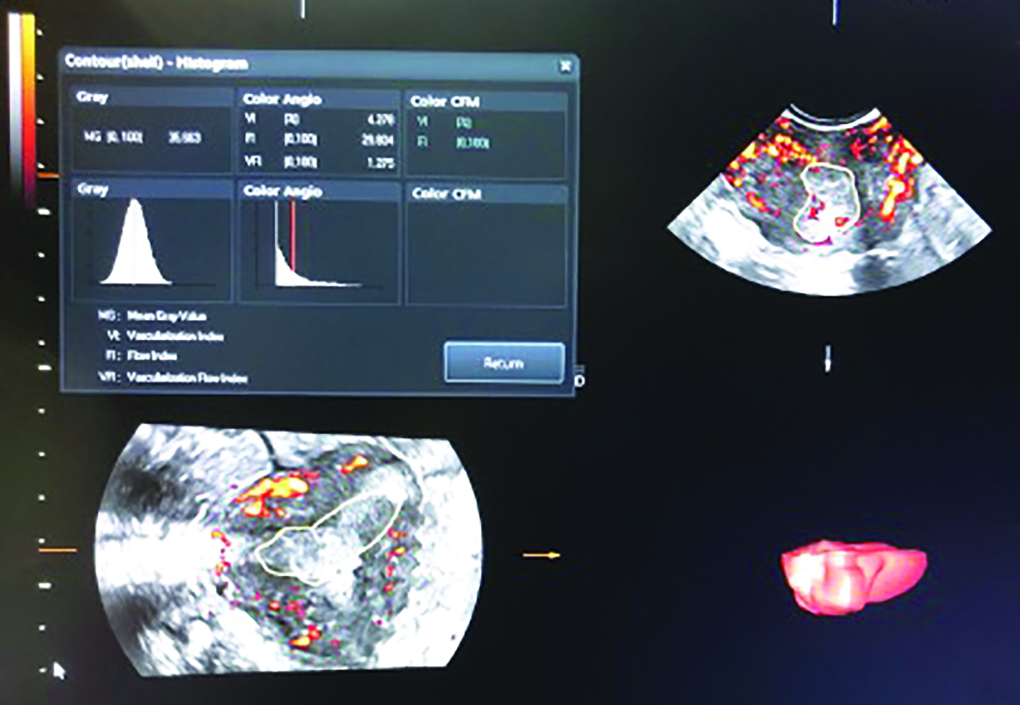 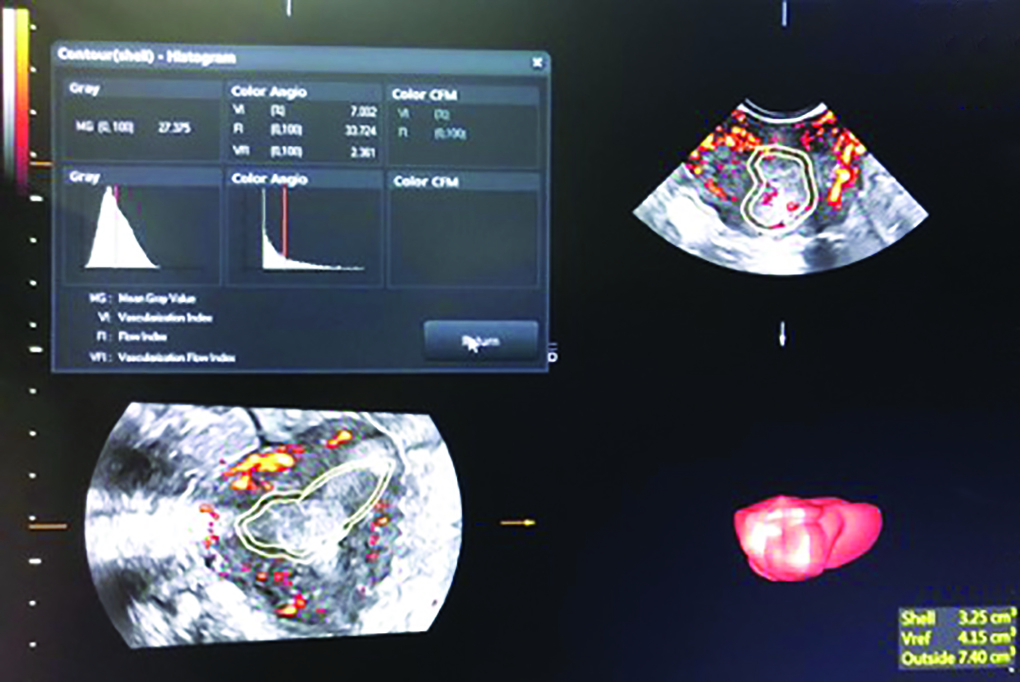 After completing the endometrial assessment, progesterone supplementation was started. Inj Micronised Progesterone 100 mg intramuscularly (Inj Susten, Sun Pharma Industries Ltd) once a day was given between 8:00 am and 12:00 pm. The duration of progesterone supplementation was dependent on the day of embryo was available for transfer. The day of Embryo transfer and the number of embryos to be transferred were based on departmental protocol.

The collected data will be analyzed with IBM SPSS statistics software 23.0 Version. To describe the data descriptive statistics frequency analysis, percentage analysis will be used for categorical variables, and for continuous variables the mean and SD will be used. To find the significant difference between the bivariate samples in independent groups the unpaired sample t-test or Mann-Whitney U test will be used as on the normality of the data. To find the association of significance in categorical data the Chi-square test or Fisher’s exact test will be used. In all the above statistical tools, the probability value of 0.05 will be considered a significant level.

We conducted a prospective cohort study to see the correlation of endometrial and subendometrial vascularity by 3D power Doppler with clinical outcomes in frozen-thawed embryo transfer cycles in 203 women satisfying the inclusion and exclusion criteria.

To see the correlation of endometrial and subendometrial vascularity by 3D power Doppler with clinical outcomes in frozen-thawed embryo transfer cycles we divided the patients into pregnant and nonpregnant groups and compared the baseline and ultrasound characteristics. Out of 203 patients, 121 patients achieved pregnancy with a pregnancy rate of 59.6%. The two groups were comparable in terms of age, duration of infertility, and type of infertility.

Body mass index, FET cycle characteristics, number, and day of embryo transferred were comparable in both the groups.

Almost a similar number of embryos were transferred in both groups. The groups were comparable in terms of the type of embryo transfer. The total duration of HRT was significantly higher in nonpregnant cycles.

Receiver operating characteristic curves were plotted for all parameters and cut-off values were calculated as shown in Table 2 and Figure 4. 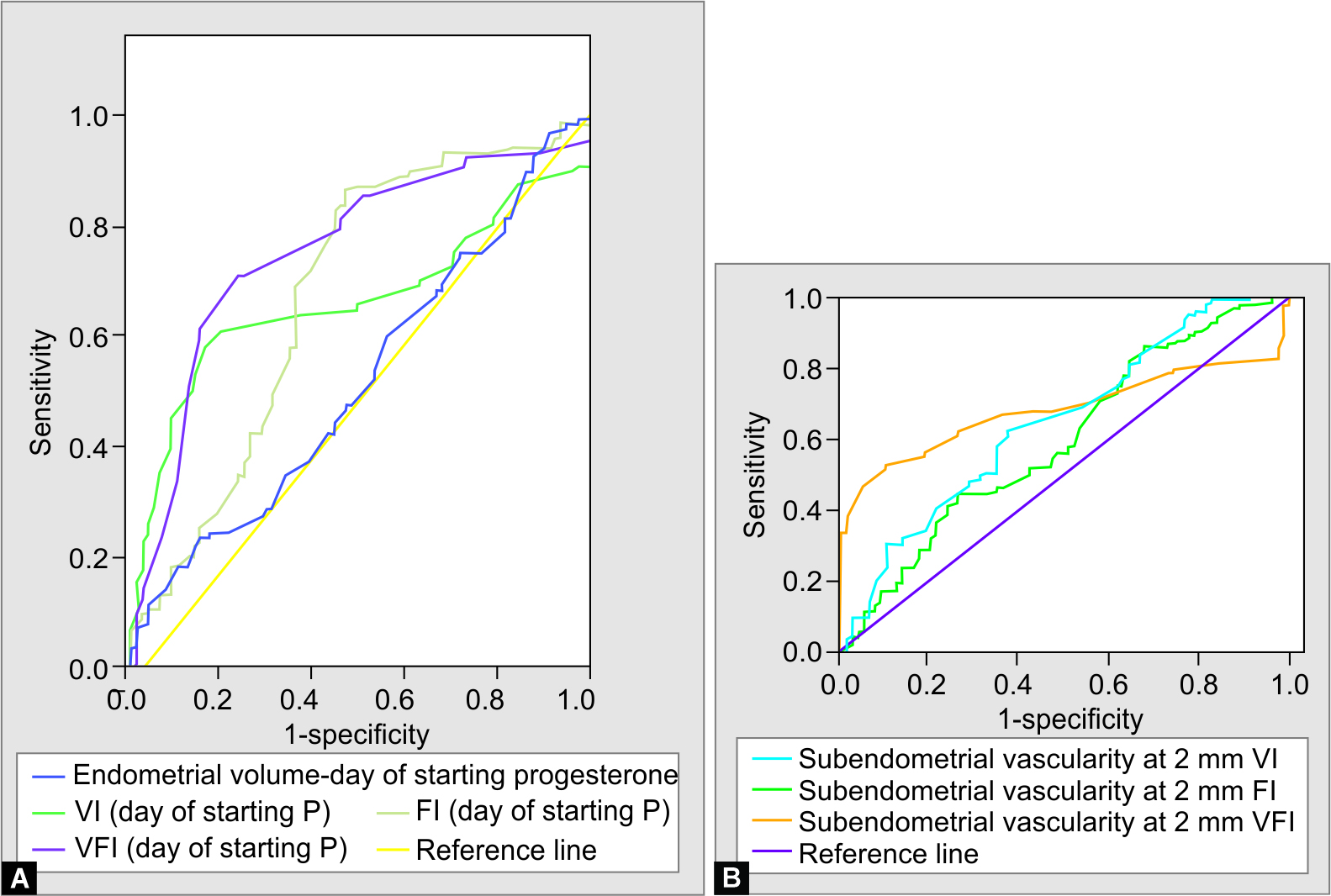 It is a matter of debate whether the assessment of endometrial or subendometrial vascularity measured by 3D power Doppler in frozen-thawed embryo transfer cycles can predict and help in the improvement of pregnancy outcomes. Despite the advent of FET in the early 1980s, and continuous increase in its usage in assisted reproduction over three decades, with about half of all embryos, transferred being frozen-thawed embryos, only a little research has been done on the role of endometrial and subendometrial vascularity by 3D power Doppler in FET cycles outcomes.

Endometrial microvascular blood flow determined in the early luteal phase of the cycle preceding an IVF cycle has been shown to be predictive of pregnancy. In a study by Jinno et al., they showed significantly higher chances of pregnancy in women with endometrial tissue blood flow of more than 29 mL/ min per 100 gm of tissue as compared to women with lower values.3 3D ultrasound power Doppler provides a novel noninvasive tool to examine the blood supply towards the endometrium and the subendometrial region.

3D power Doppler angiography of the uterus involves the acquisition and measurement of power Doppler data within a 3D data set. Embryo wastage can be avoided with this novel technique by identifying when the endometrium is in a better receptive state. The “histogram” tool uses specific algorithms to derive indices of blood flow and display the distribution of the power Doppler data. Several settings determine the intensity of the power Doppler spectrum: gain, pulse repetition frequency (PRF), line density, wall motion filter, signal rise, and persistence and speed of acquisition.4

Strengths of Our Study

Limitations of Our Study

3D vascularity parameters are better correlated with pregnancy outcomes when compared to 2D and can be a novel method to assess endometrial receptivity. We would like to use the cut-off values obtained from this study and analyze if that helps in decision-making regarding embryo transfer.