Materials and methods: A total of 265 fresh POC were evaluated by the different BoBs (233 KaryoLite™ BoBs, nine Prenatal™ BoBs, and 23 of both).

Results: BoBs detected chromosomal abnormalities in 142 samples (53.58%). The most frequent chromosome abnormality was trisomy 21 (17.61%), followed by monosomy X, trisomy 16, and trisomy 22 (14.08%). Twenty-three samples (13 normal and 10 abnormal), which used both KaryoLite™ and Prenatal™ BoBs kits, were concordant. Moreover, BoBs techniques had no failure rate.

At least 10% of pregnancy loss occurs in the first trimester due to fetal chromosomal abnormalities.1-4 The use of products of conception (POC) for genetic testing can identify the cause of miscarriage. Conventional karyotyping is the gold standard required for the tissue culture process. This process requires time to culture the material and has a high failure rate of approximately 5–25%.5 Bacterial artificial chromosomes (BACs)-on-beads (BoBs) technology is a rapid molecular genetic method to detect DNA copy number gains and losses. It does not require cell culture and may increase diagnostic yield to detect anomalies in early pregnancy losses. Two types of BoBs assays are available. The Prenatal™ BoBs have been developed to detect aneuploidies of chromosomes 13, 18, 21, X, and Y and detect gains and losses of DNA in critical regions of chromosomes associated with nine microdeletion syndromes (DiGeorge-1, DiGeorge-2, Williams-Beuren, Prader-Willi, Angelman, Smith-Magenis, Wolf-Hirschhorn, Cri du Chat, Langer-Giedion, and Miller-Dieker syndromes). The KaryoLite™ BoBs have been developed to detect aneuploidies and regions of specific chromosomal p and q arms of all 24 chromosomes in a single assay.4,6-8 There are 3–4 beads per chromosome. The labeled beads are detected using a Luminex platform identifying fluorescence intensity between a sample and references to identify DNA copy number changes across the regions. Due to the high failure rate of POC samples culture, we aimed to investigate the use of the BoBs (Prenatal™ and KaryoLite™) technique to detect chromosomal aneuploidies and microdeletions in POC. In addition, the concordance and efficacy of both methods were evaluated.

The 265 DNA samples routinely archived at −80°C were extracted from fresh products of conception, which included samples extracted from placental villi (n = 169), umbilical cord (n = 4), intestine (n = 1), CVS (n = 16), yolk sac (n = 3), and fetal somatic tissue (n = 72). These specimens were collected between January 2013 to December 2020. Approval for this study was obtained from the Committee on Human Rights Related to Research Involving Human Subjects based on Helsinki’s Declaration (COA. MURA2014/686).

All samples were collected in a saline solution and extracted for purified DNA. According to the manufacturer’s protocol extraction reagents for tissues, DNA was extracted using the QIAamp DNA Micro Kit (QIAGEN, Hilden, Germany). The extracted DNA’s concentration and purity were measured by Nanodrop 2000 Spectrophotometer instrument before labeling DNA and after the labeled DNA purification.

KaryoLite™ BoBs and Prenatal™ BoBs were performed according to the manufacturer’s instructions (PerkinElmer Life Sciences Wallac, Turku, Finland) Luminex 200 platform to identify fluorescence intensity.9 The 240 ng of genomic DNA was amplified with a biotin-labeled dNTP mix and purified with the NucleoFast purification plate to remove unbound biotin-labeled dNTPs. The biotin-labeled samples were hybridized with KaryoLite™ bead or Prenatal™ bead in a 52°C TriNest™ shaking incubator for 16–20 hours. The hybridized beads were transferred onto a filter plate and washed. After washing, the beads were incubated with a reporter molecule (streptavidin–phycoerythrin) and washed again. After that, the fluorescent signals were measured, and the results are analyzed. The results were analyzed using BoBsoft 2.0 software (PerkinElmer Life Sciences Wallac, Turku, Finland). For BoBsoft analysis, all 24 chromosomes were presented as a sample to reference ratios for each probe and defined as duplicated or deleted in a chromosome locus when the test was higher or lower than the reference. The hybridization intensity of the female (red) and male (blue) reference standards was plotted (Fig. 1). The ratio of copy gains ranges from 1.3 to 1.4, and losses range from 0.6 to 0.8.10-12 The overall time of the BoBs process was completed in 48 hours. 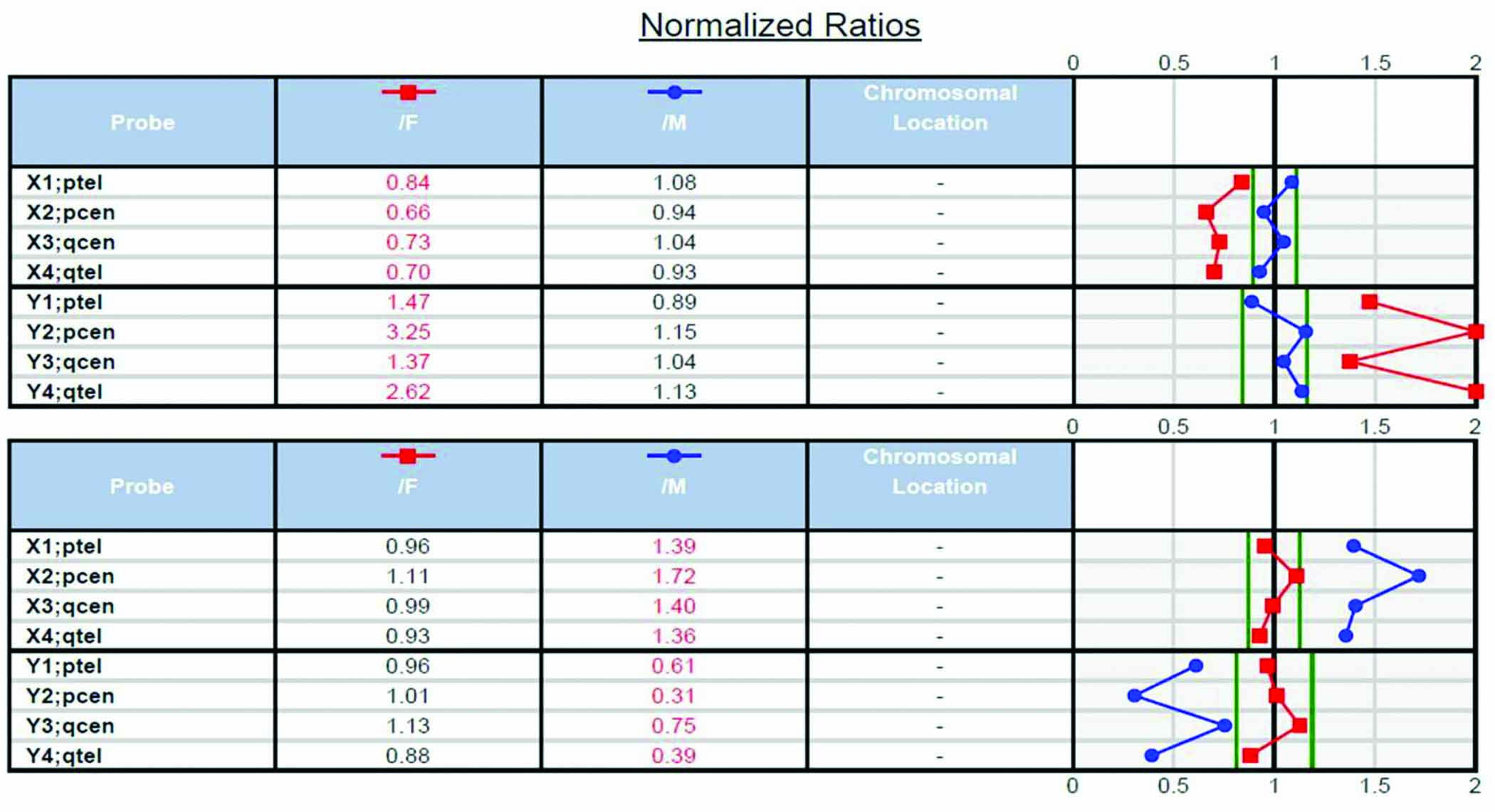 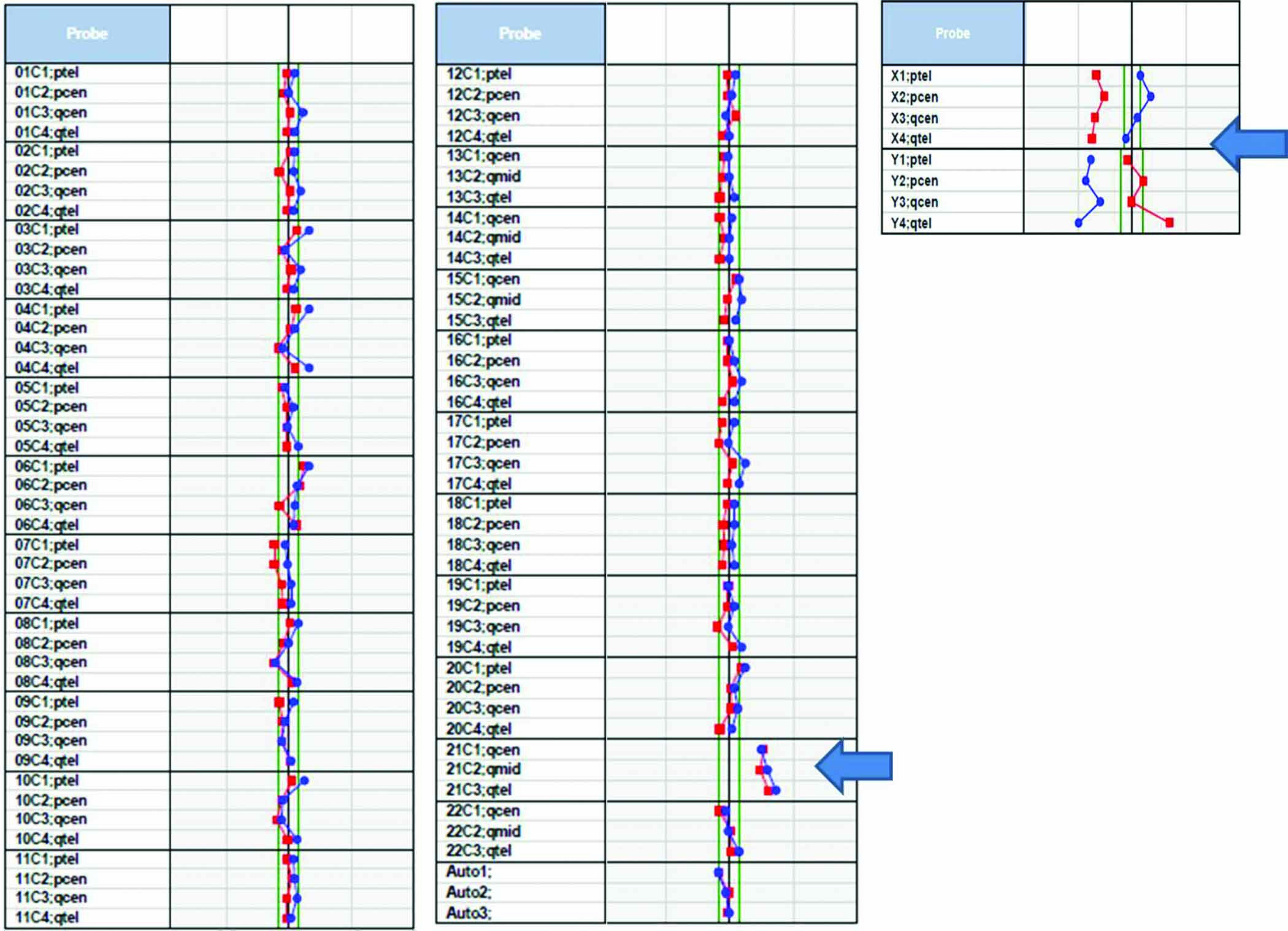 Fig. 2: Examples of BoBs™ results for one sample with multi-abnormalities. The arrows indicated the ratio of chromosome 21 copy gains, two copies of X, and one copy of Y chromosome. These results were in concordance with trisomy 21 and XXY 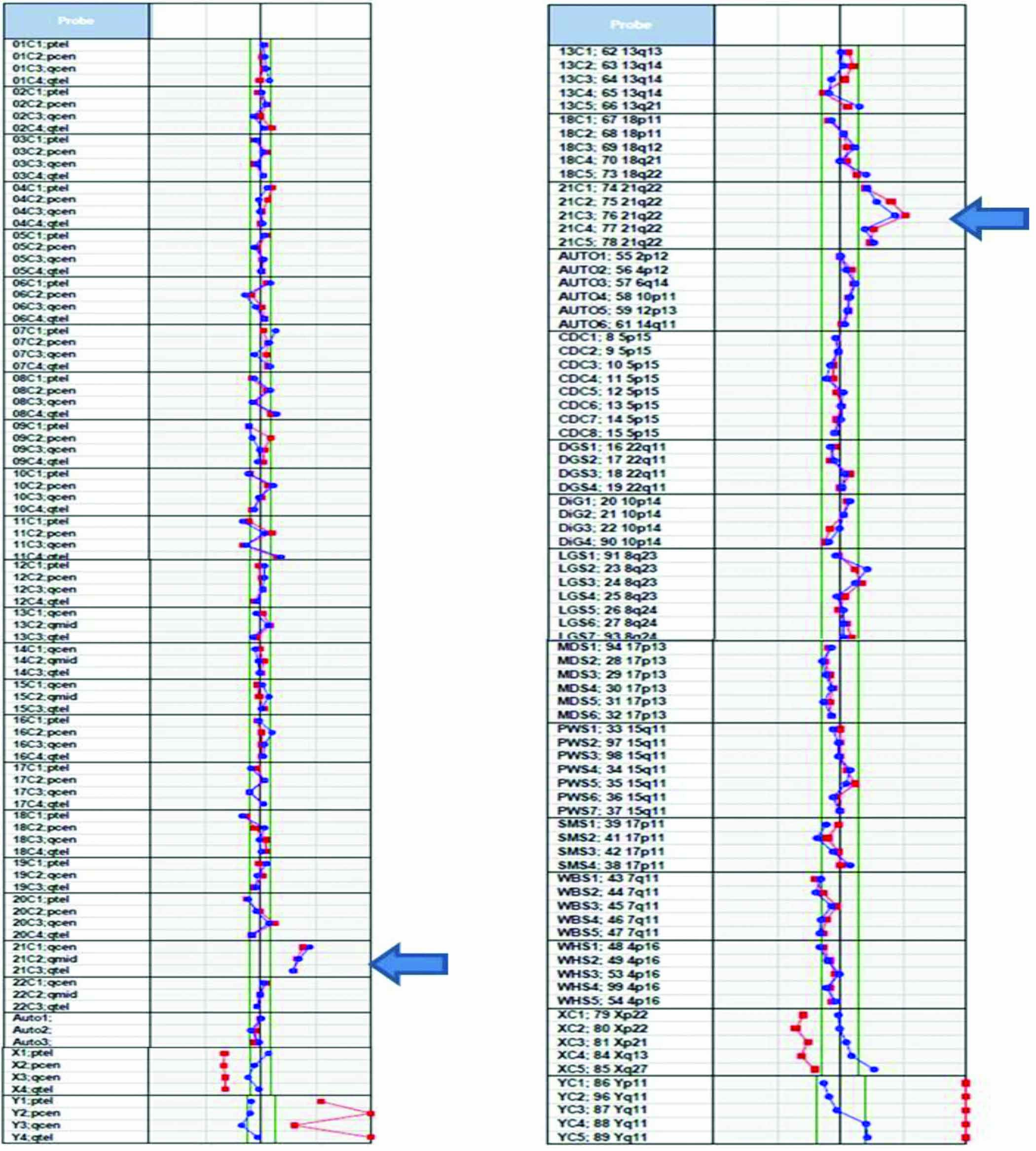 Fig. 3: Examples of BoBs™ results which used both of KaryoLite™ (Left) and Prenatal™ (Right) BoBs kits. The arrows indicated the ratio of chromosome 21 copy gains from both kits. These results were in concordance with trisomy 21

Previously, conventional cytogenetics has been used to detect the cause of pregnancy losses. The difficulties in creating tissue cultures, cell growth failure, and maternal cell contamination are the major problems in detecting POC specimen abnormalities.4,13 Molecular cytogenetic techniques can overcome conventional karyotyping pitfalls, such as culture failure and trace submicroscopic abnormalities. Therefore, they are potentially increasing the diagnostic yield to detect chromosomal abnormalities in the POC specimens.14 BoBs technology is a rapid molecular technique to detect DNA copy number gains and losses, which is suitable for detecting aneuploidy, representing the largest class of chromosome abnormalities in spontaneous miscarriages.

In this work, we aimed to examine POC’s rapid screening by using two different types of BoBs™ assays: (1) Prenatal BoBsTM to detect the most frequent syndromes associated with chromosome microdeletions, as well as the trisomy 13, 18, and 21, and (2) KaryoLiteTM BoBs which can detect aneuploidy in all chromosomes by quantifying proximal and terminal regions of each chromosomal arm. Single autosomal trisomy was the most frequent abnormality (70.6%), The most frequent chromosome abnormality found was trisomy 21, followed by trisomy 16, trisomy 22, and monosomy X. Double trisomy, segmental gain, and mosaicisms were also demonstrated.

In the BoBs technique, we directly extracted DNA from POC specimens which contributed to the lower failure rate than cultures for karyotyping and allowed more rapid results. Unlike karyotyping, the findings are usually available within 48 hours, relieving patients of much of their anxiety. It is one of the key reasons why molecular approaches for prenatal diagnosis of the most common chromosome disorders were implemented. Since the BoBs assay is not necessitated the cells’ cultivation, some specimens do not fail due to microbial contamination, which is a common problem in cell culture. As a result, there was no failure rate in this experiment for BoBs analysis.

The PrenatalBoBs can also identify common microdeletion syndromes, unlike FISH or QF-PCR, both of which can be easily overlooked despite excellent prenatal sonography.15,16 Since PrenatalTM BoBs is a targeted assay, it will overlook loci of the genome that may have clinical significance in an unbalanced state but are not targeted by the probe set. Better genome-wide coverage will allow for the identification of more clinically significant imbalances, as well as gains and losses of uncertain or undefined clinical significance. Furthermore, both KaryoliteTM and Prenatal BoBs have some drawbacks in identifying polyploidies (triploidy and tetraploidy), which account for approximately 16% of POC abnormalities observed by conventional karyotyping.17

(BACs)-on-beads can only detect chromosomal imbalances. Balanced rearrangements, including paracentric or pericentric inversions, balanced insertions, balanced translocations, and Robertsonian translocations, cannot be detected by these methods. Low-level mosaicism for unbalanced rearrangements or aneuploidies can also distinguish significant fetal mosaicism (approximately 30% with PrenatalTM BoBs and approximately 50% with KaryoLite BoBs),17,18 which is another drawback in POC specimens.

Chromosomal microarray (CMA) technologies overcome many of the shortcomings of traditional cytogenetic analysis on POC specimens and increase the test’s success rate and submicroscopic chromosomal aberration detection.13 Besides, instead of cultured cells, the CMA method uses extracted DNA, which reduces the significant amount of time needed for cell culture. CMA is also unable to detect polyploidy, balanced rearrangements, such as translocations, reversals, and insertions, which have the same limitations as the BoBs method. Although, it is unlikely that these forms of anomalies are linked to the cause of the miscarriage. Overall, in identifying unbalanced genomic aberrations, the oligo-SNP CMA approach has a higher resolution than traditional chromosome analysis. Also, polyploidy (e.g., triploidy) and uniparental disomy can be identified by SNP-based microarrays (Table 3).

The general adoption of the CMA may be hindered by the relatively costly and sophisticated technical requirements.13 While BoBs may not have the breadth and scope in the prenatal setting to replace CMA, mainly when a fetal anomaly has been detected, it is a suitable alternative for FISH or QF-PCR because BoBs are comparable in terms of cost, turnaround time, and throughout, and accuracy, if not superior. Our study exhibited some limitations; there was no confirmation test like karyotyping or CMA. The study lacked multicenter collaboration and a large amount of data. Thus, further studies with multicenter surveys and larger sample sizes are required to confirm our findings.

(BACs)-on-beads results support that POC’s cytogenetic analysis is a handy tool to determine the cause of miscarriage. This method is an advantage over conventional cytogenetics including quicker results and a lower failure rate. Therefore, this technique will strengthen best practices by personalizing prenatal care when BoBs are implemented in the proper clinical environment and run and evaluated in a low-resource setting.