Background: Global estimated prevalence of endometriosis is about 10 to 15% of women in reproductive age. This chronic inflammatory ectopic endometrium causes pain symptoms and is also attributed to infertility problems. Even though advances in endometriosis management have been developed, cumulative recurrence rate of endometriosis is still as high as 55% after 5 years of therapy with GnRH agonist. Therefore, further investigations are continuously needed to improve treatment outcome in endometriosis, especially through better understanding of the disease pathophysiology.

Methods: This cross-sectional study was aimed to describe the expression of GnRH receptor type-II (GnRHR-II) with immunohistochemical staining. Semiquantitative analysis of protein expression was performed with histological scoring (H-score). Moreover, the expression level of GnRHR-II was then compared to Ki-67 protein expression, a marker of cell proliferation.

Conclusion: Our study showed an evidence of extrapituitary expression of GnRH receptor type-II. Endometriosis consistently expressed GnRHR-II and might play important role in the regulation of proliferation. Our results may trigger further explorations of GnRH receptor-targeted therapy that selectively inhibit proliferation pathway.

Endometriosis is estimated to affect around 10 to 15% of women in reproductive age.1 It is known as a chronic inflammation caused by ectopic endometrial growth with estrogen-dependency. Patients may come with dysmenorrhea, dyspareunia, or chronic pelvic pain. In addition to pain symptoms, endometriosis also contributes to infertility, by which 35 to 50% infertility patients are affected. Therefore, quality of life is deteriorated.2

Medication with GnRH agonist is a fundamental modality that may suppress central regulation of estrogen production. This hormonal therapy suppresses FSH and LH production by pituitary, thereby estrogen level decreases.3 Clinically, GnRH is a proven medication to indicate pain symptoms or recurrence prevention in postsurgical endometriosis. However, about 10 to 20% of endometriosis patients do not respond effectively to GnRH agonist. In addition, cumulative 5-year recurrence rate is as high as 55%.4 Therefore, GnRH agonist treatment responsiveness vary among endometriosis patients, and need to be further clarified.

Mechanism of action of GnRH agonist is mediated by saturated interaction to the receptor. GnRH agonist compound that mimics natural GnRH is known of its high potency (200 more potent), with higher affinity to receptors and longer half-life. By the interaction between GnRH agonist and GnRH receptor, the downstream signaling is suppressed through desensitization. Therefore, mechanism of action of GnRH agonist is mainly related to the receptor expression in target organs.5,6 Recent evidence found that GnRH receptor is not only exclusively expressed in pituitary, but also in various peripheral organs, including: nervous system, genital tract, and placenta.7 Several gynecologic malignancies, such as endometrial and ovarian cancer, also highly express GnRH receptor.8 However, information of endometriosis expression of GnRH receptor is still limited.

Receptor of GnRH is known in two different isoforms: type-I the earlier known and type-II. This type-II receptor (GnRHR-II) is a relatively new discovery that may impact on various gynecologic pathology management, due to several biologic properties. GnRHR-II is widely distributed in extrapituitary organs.7 Type-II receptor may be found in central nervous system, reproductive tract, placenta, endometrium, and granulosa cells of the ovary. Affinity of GnRHR-II to bind GnRH is also much stronger than GnRHR-I. These biologic properties sought to trigger further investigation of GnRHR-II roles in biologic modulation of various pathologies, including endometriosis.9 In this study we performed IHC to investigate GnRHR-II expression in endometriosis tissue, especially we also clarify the correlation with a proliferation marker, Ki-67. We hope results of our study may impact on endometriosis patients through better understanding of disease pathophysiology that leads to better therapeutic strategy.

We performed a cross-sectional study that compared the expression level of GnRHR-II and Ki-67 in endometriosis tissues. All patients gave signed, informed consent for their tissues to be used for scientific research. Recommendations of the Declaration of Helsinki for biomedical research were also followed to get the approval by Joint Institutional Review Board (JIRB) of the Universitas Gadjah Mada. Correlation of these two proteins was also studied to clarify the importance of GnRHR-II in proliferation regulation. Proliferation activity is studied by identification of Ki-67 that is already widely used as proliferation marker.10,11 Protein Ki-67 is highly expressed when cell enters mitotic phase that plays a role in preventing chromosomal aggregation.12

From January to December 2019, seventy-four patients underwent endometriosis surgery, either laparoscopy or laparotomy. Among those 74 patients, twenty subjects were randomly selected to have IHC staining for GnRHR-II and Ki-67 in Pathology Anatomy Department, Sardjito Central Hospital. Table 1 describes baseline characteristics of 74 patients who underwent surgery in our hospital within study period. Among those 74 patients, mean of age at diagnosis was 32.61 (± 6.43) year–old with normoweight BMI (22.13 ± 3.89). A large-scale population-based study estimated a point prevalence of endometriosis at 10.8 of 1,000 women in reproductive age. Peak prevalence of age at diagnosis was 25 to 35 year-old, thereby our result was also consistent with this population study.13 Mean age at diagnosis in this study was 32.61 year-old.

Brown color on immunohistochemical-stained tissue comes from enzymatic reaction to substrate that specifically initiated by interaction between antibody anti-GnRHR-II or antibody anti-Ki-67 to respective proteins. Therefore, brown color indicates presence of GnRHR-II or Ki-67. From IHC staining, we found that Ki-67 was localized in endometriosis cell nuclei, while GnRHR-II was found diffusely on cellular membrane or intracytoplasmic. This result may prove an evidence of GnRHR-II expression in extrapituitary tissue, to be specific in endometriosis tissue. In addition, Ki-67 overexpression suggests a higher proliferation activity in endometriosis. Expression of GnRHR-II varied from weak intensity to strong intensity, that can be seen in Figure 1. 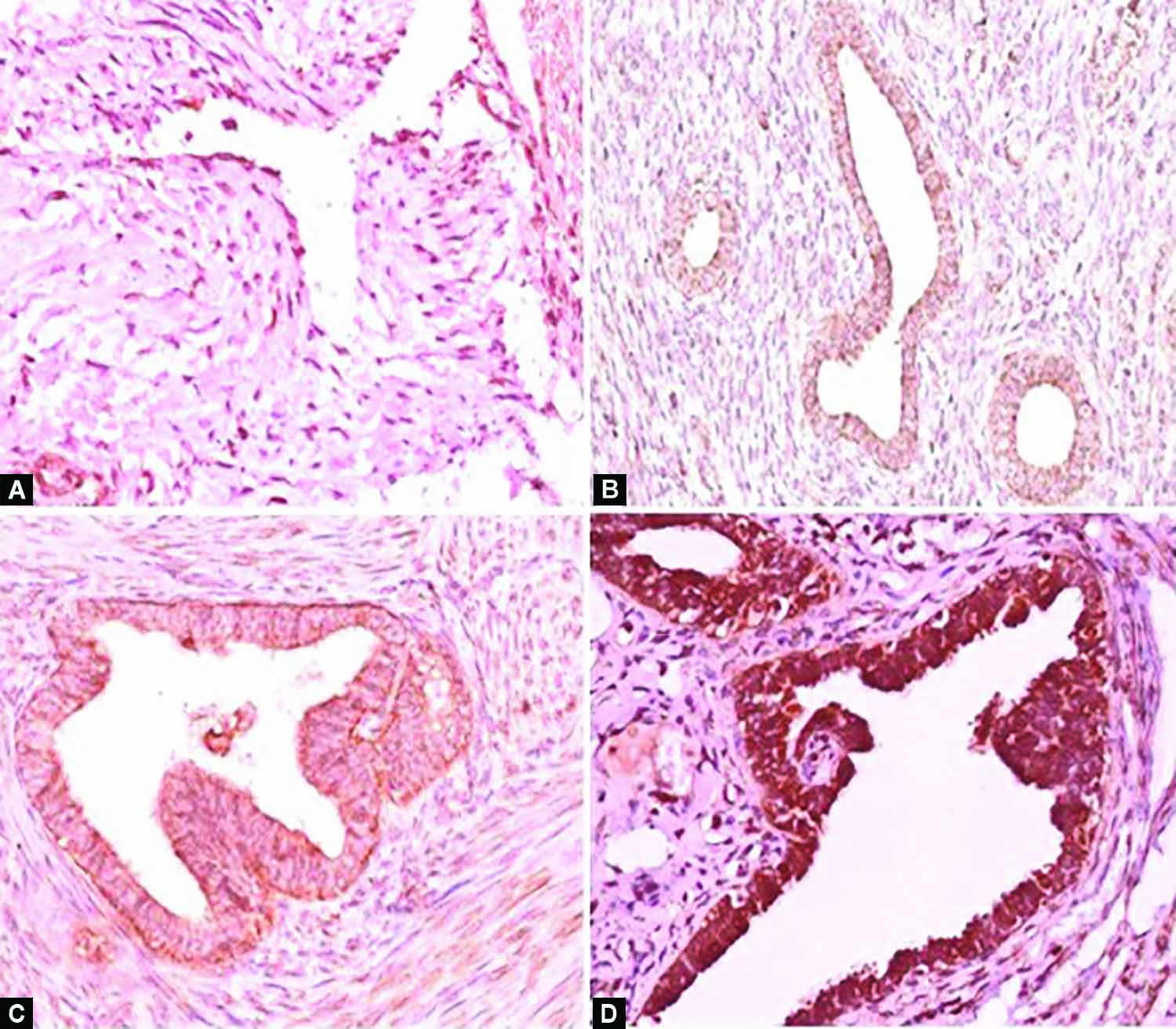 In a more detail examination at cellular level, Ki-67 was seen on peripheral sheath of nuclei. It served as perinuclear sheath that covers dividing genetic materials. The function of Ki-67 in mitotic phase of cell cycle is preventing chromosomal aggregation.12 Sometimes, Ki-67 might still be seen in G-phase as punctate inside nuclei. Different with Ki-67, GnRHR-II was seen intracytoplasmic or on cellular surface (cell membrane). This is consistent with the structural characteristics of GnRHR-II as a transmembrane receptor, with some intracytoplasmic portions (Table 2).

Histological score (H-score) was then calculated, following a standard calculation procedure. Histological scoring of GnRHR-II and Ki-67 was presented in a scatter plot. From Figure 2, we found a linear correlation between GnRHR–II expression and Ki–67 level. More importantly, we found a significant positive correlation in moderate degree (Pearson correlation score 0.56, 95%CI 0.15–0.80, p = 0.01). According to our results, GnRHR–II overexpression increases proliferation activity in endometriosis (represented with higher Ki–67 expression) (Fig. 2). 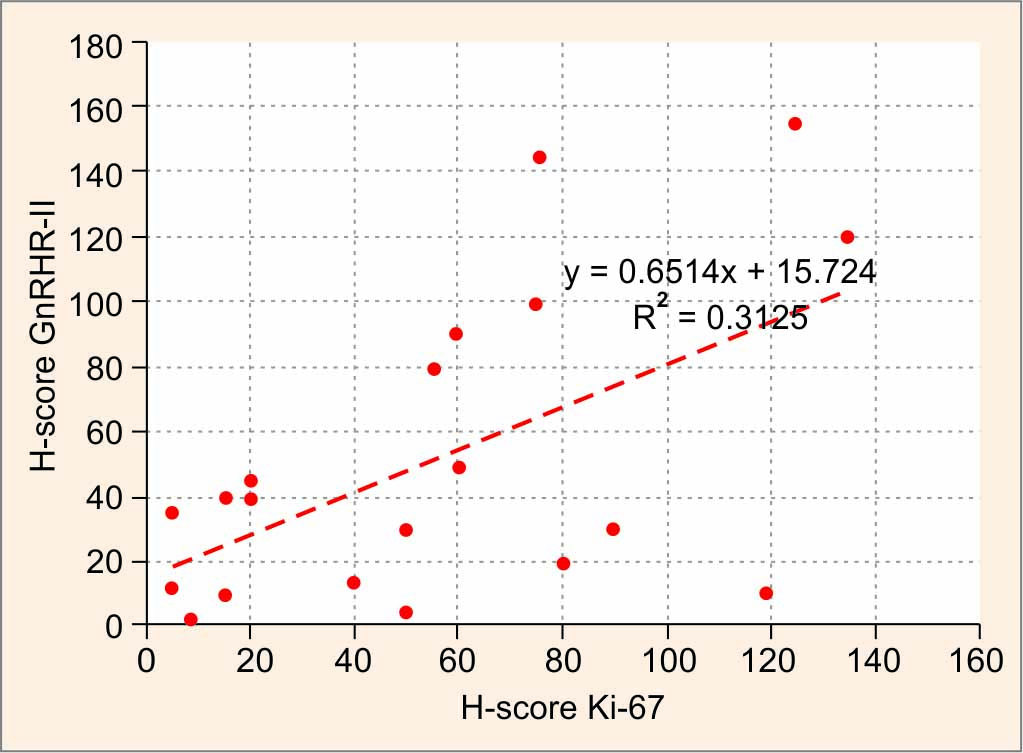 Semiquantitative analysis of the IHC staining was then further performed with Histological score (H-score), following established protocol. A scatter plot can be seen in Figure 2 that represents all H-scoring of GnRHR-II and Ki-67 from 20 tissue samples. A linear curve was seen to represent a linear correlation between GnRHR-II expression and Ki-67 expression, with R2= 0.312. Pearson correlation analysis was done to clarify the correlation and the statistical significance. We found a moderate power of positive correlation between GnRHR–II expression and Ki–67 expression (Pearson correlation score 0.56, 95%CI: 0.15–0.80, p = 0.01). It means, GnRHR-II overexpression leads to higher proliferative rate in endometriosis.

Generally, pathologists set a threshold of 15% positive staining (or H-score 30) to define an increased proliferative rate. This definition can be seen in various malignancy analysis, as well as non-malignancy analysis.12 If we use H-score 30 for Ki-67 we can also calculate the threshold value of GnRHR-II threshold that may cause a significant proliferative activity improvement. Calculation of GnRHR-II threshold in this study can be seen from the calculation below:

Threshold value of GnRHR-II expression may be importantly translated into clinical practice, as patient with high GnRHR-II expression above threshold must be treated carefully due to higher proliferative activity. This finding can be much important to provide better postsurgical treatment strategy.

Expression level of GnRHR-II and Ki-67 was then compared between groups based on several clinical parameters: cyst laterality (unilateral vs bilateral), endometriosis tissue size (< 5 vs ≥5 cm), staging (early vs late stage), age (> 35 vs ≤35 year-old), and infertility status (yes vs no). Severity of the disease is staged based on ASRM criteria into: early stage (stage I and II) or late stage (stage III or IV) (Table 3).

In contrast, GnRHR-II did not differ in groups with younger versus older age at diagnosis, and in group with different laterality (unilateral cyst versus bilateral cyst). Expression comparison of GnRHR-II and Ki-67 can be seen in Table 3. Evidence of correlation between GnRHR-II and Ki-67 indicates importance of GnRHR-II signaling in regulation of proliferation. The higher the expression of GnRHR-II, the higher the proliferative activity. In addition, GnRHR-II expression was also associated with some clinical parameters. Mean of GnRHR-II high score was significantly higher in the group of subjects with larger endometriosis tissue size (≥ 5 cm). Patient in later stage (stage III and IV) also had higher mean of GnRHR-II H-score. Although, the statistical analysis did not differ significantly, in comparison to earlier stage (stage I and II), GnRHR-II might also play important role in disease severity through proliferation regulation. However, several other signaling pathways may also crosstalk with GnRHR-II pathway to finally result in disease progression. Expression of GnRHR-II did not differ in groups, based on age at diagnosis and cyst laterality.

We concluded that endometriosis cells consistently expressed GnRHR-II and positively correlated with Ki-67 as a cellular proliferation marker. We do hope our results may trigger further investigation that study GnRHR-targeted therapy in endometriosis, especially through proliferation inhibition.

We provide an evidence of GnRH receptor type-II expression in extrapituitary tissue. GnRHR-II in endometriosis tissue was found overexpressed and was positively correlated with proliferation activity. Our results may clinically impact on clinicians to clarify disease progression by evaluating GnRHR-II expression, as higher GnRHR-II expression indicates higher proliferative capacity. In addition, expression level of GnRHR-II may also indicate therapeutic responsiveness, due to hormonal therapy is highly related to receptor expression. More importantly, our results may impact endometriosis patients to provide a better individualized-therapeutic strategy.