Our case involves a patient who desired fertility even though she previously underwent tubal sterilization. We performed a laparotomy approach to identify the previously ligated fallopian tubes. Using a loupe, we performed resection on both proximal and distal ends of the dissected tubes. Interrupted sutures were done on the mesosalpinx, followed by four stitches on muscular layers at 6, 3, 9, and 12 o’clock positions. Tubal patency test was then performed to check the patency of both tubes. An irrigated methylene blue into both fimbriae tubae indicated the patency of both tubes. During the 12-month follow-up, our patient became pregnant and delivered spontaneously.

Tubal reanastomosis is an alternative to in vitro fertilization (IVF) for patients who desire fertility after tubal sterilization. Some reports have also mentioned the superiority of tubal reanastomosis, in terms of feasibility and cost-effectiveness. It is an important technique in a low-resource setting. However, this method is rarely performed and less taught in the fellowship training. Pregnancy rate and the possibility of ectopic pregnancy are the main concerns. Therefore, in this paper, we also performed a systematic review of studies conducted in the last 10 years that evaluated the fertility outcome of tubal reanastomosis.

A 36-year-old woman came to consult concerning the possibility to get pregnant after undergoing tubal sterilization 5 years ago. She desired fertility after her remarriage. After being evaluated and the other causes of infertility were excluded, tubal reanastomosis was preferred. Informed consent was collected before performing the operation. Before surgery, we performed hysterosalpingography to identify the obstructed fallopian tubes.

We performed microsurgical tubal reanastomosis, utilizing fine sutures, and magnifying loupe. During the operation, identification of the ligated tubes was needed. We found both tubes were ligated at distal 1/3rd of the tubes. Step-by-step procedures of surgery we conducted are mentioned below:

Illustrated figure of the operation is presented in Figure 1. After postoperative recovery, the patient was recommended to have contraception for 3 months. Within 12-month follow-up, the patient successfully became pregnant. 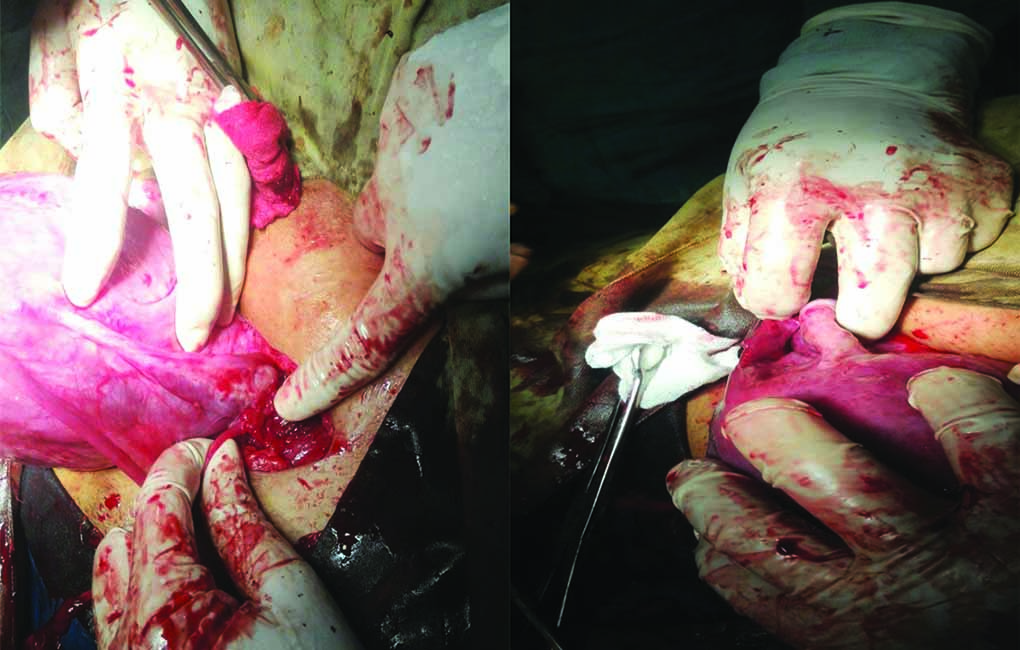 Fig. 1: Both tubes were obliterated at distal 1/3rd of the tubes (as pointed above). Both ovaries and fimbriae were normal

Literature searching was performed using the PICO approach, which involved the clinical question: “How effective is tubal reanastomosis to recover fertility status of previously sterilized woman?” After developing this question, we managed to define the following:

We used PUBMED search engine to identify relevant literature on MEDLINE database. We used keywords: tubal reanastomosis, sterilization, and fertility. According to these keywords, the results were as follows:

From a total of 59 results from the database search, we selected studies based on the following eligibility criteria: the study must be conducted within the last 10 years, and studying the fertility outcome (pregnancy rate and/or delivery rate) of tubal reanastomosis after female sterilization. According to these criteria, a total of 16 studies were included in our review.

Female tubal sterilization is a preferred contraceptive method in patients who do not intend to have children. It is the most common contraceptive used in women, and more than 180 million women have chosen this method.4 Tubal sterilization has a low failure rate ranging from 0.85–18.5% and a low overall complication rate.5 It was first introduced through the laparotomy approach as the Pomeroy method to ligate and cut both fallopian tubes. Later, laparoscopic approach was developed to be less invasive via ligating devices, either electrocautery or application of fallopian rings or clips. More recently, hysteroscopic sterilization offers a lesser invasive approach. With the FDA approval to use nickel titanium (nitol) occlusion material in the tubal ostium in hysteroscopy, the application of hysteroscopic sterilization is becoming more popular.6

Globally, it is estimated that about 15% of women who had tubal sterilization regret their choice due to various reasons, for example, change of marital status, loss of the child, or change of attitude.3 Accordingly, any possible way to restore the fertility status in females who underwent tubal sterilization is an important issue.7 Currently, the only options to reverse fertility status after tubal ligation are either IVF or tubal reanastomosis. Meanwhile, assisted reproductive technology through IVF is still a costly option. Across maternal age, tubal reanastomosis shows superior cost-effectiveness than IVF. Tubal reanastomosis is about 50% more cost-effective than IVF.8 However, tubal reanastomosis is less frequently performed and is also less taught in fellowship training.

Tubal surgery has evolved to be an effective technique in reproductive surgery. Successful tubal reanastomosis was initially performed in animal studies, prior to be conducted in patients by laparotomy.9 Classical technique of tubal reanastomosis occupies four muscular interrupted sutures and outer serosa layer sutures. Avoidance of suture on the mucosa layer is considered to improve pregnancy rate.10 Technique of tubal reapproximation is continuously improving. Technique utilizing fewer stitches was introduced, and even a single continuous suture also offered alternative option to the interrupted suture to reduce operation time without compromising tubal patency.11 Despite various techniques, the classical technique with four-stitch is still the most preferable technique.10

Laparoscopic approach facilitates image magnification that enables sutures in tubal reanastomosis, which is comparable to laparotomy with microscope. Various suture techniques in laparoscopic tubal reanastomosis have been described. The most common technique includes two sutures: at the mesosalpinx and at the opposite that involves both muscular and the outer serosa layers. Dubuisson and Swolin introduced a single stitch technique in 1995 that only requires one suture to align two tubal segments. They performed suturing to the antimesial edge of the tube, connecting the layers of the serosa and musculature. This technique was designed to reduce the length of an operation procedure in laparoscopic tubal reanstomosis.12 Some authors also reported sutureless techniques. Automated clipping (autosuture) or tissue adhesive may be used in the laparoscopic sutureless approaches. Tulandi combined suturing technique to muscular layers with tissue adhesive to the serosa. The effectiveness was found similar to normal laparoscopic tubal reanastomosis using sutures to all layers.13 However, problems emerged in the application of tissue adhesive because some negative effects were reported in animal studies, such as dehiscence, fistulae, and intratubal adhesion.14

Robotic surgery is recently also an available approach in tubal reanastomosis. Two types of robots were applied in several case series: the da Vinci Surgical System and Zeus Robotic Surgical System with varying suture techniques and suture materials. Kavoussi reported advantages of robotic tubal reanastomosis, including shorter operative time, less technical difficulty due to enhanced ergonomics, and minimization of surgical fatigue. They performed a single-stitch technique, rather than a four-stitch technique that is more common. Dilute vasopressin was injected into mesosalpinx for hemostasis. After dissection of the occluded fallopian tubes, a double-needle 5–0 polyglactin suture was performed into the lumen at the 12–o’clock position from mucosa layer into muscularis and out through serosa layer.15

In our case, we successfully performed microsurgical laparotomy approach of tubal reanastomosis after identifying the (Table 1) ligated or dissected fallopian tubes. We used a stent from catheter No. 6 to facilitate tubal lumen patency while bringing the two tubal segments together. After removing the ligated tubes, we performed microsurgery for suturing. Mesosalpinx was sutured with polypropylene material no. 6.0. Further, muscular layers at the end of both tubes were identified and they were sutured systematically at 6, 12, 3, and 9 o’clock with 6.0 polypropylene sutures. The serous layer was then sutured with nonlocking continuous sutures. Before we closed the abdomen, the tubal patency test by irrigating methylene blue dye was done to make sure that both tubes were patent and there was no leakage from the reanastomosis sutures. The illustrated figure of the technique is provided in Figure 2. 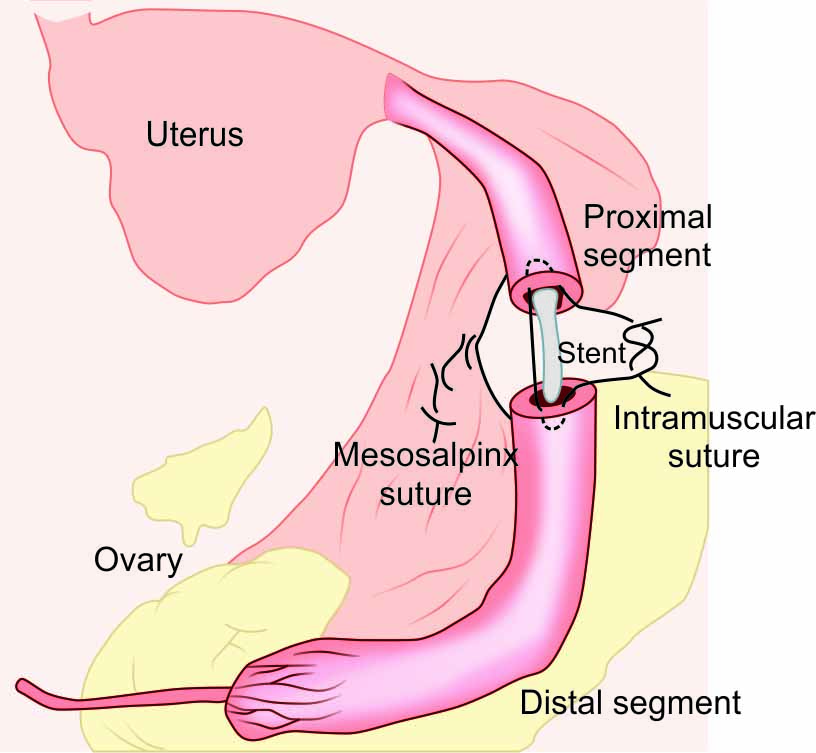 Rates of pregnancy were very high in the microsurgical tubal reanastomosis studies conducted by Moon et al. and Berger et al.The Korean study by Moon et al. recruited a large number of subjects, with 961 women. However, that study did not provide the data of delivery rate.24 Meanwhile, Berger et al. recruited an even larger number of subjects. They studied the fertility outcome of microsurgical tubal reanastomosis of 6,692 subjects and found a pregnancy rate of around 69%. Moreover, they also mentioned a delivery rate of 34.58% and ectopic pregnancy rate of 13%.25 Interestingly, our cumulative evidence did not show any difference of pregnancy rate (p = 0.36) and delivery rate (p = 0.74) among different surgical approach. Therefore, microsurgery has comparable effectiveness to minimal invasive surgery in reversing fertility status after tubal sterilization (Fig. 3). 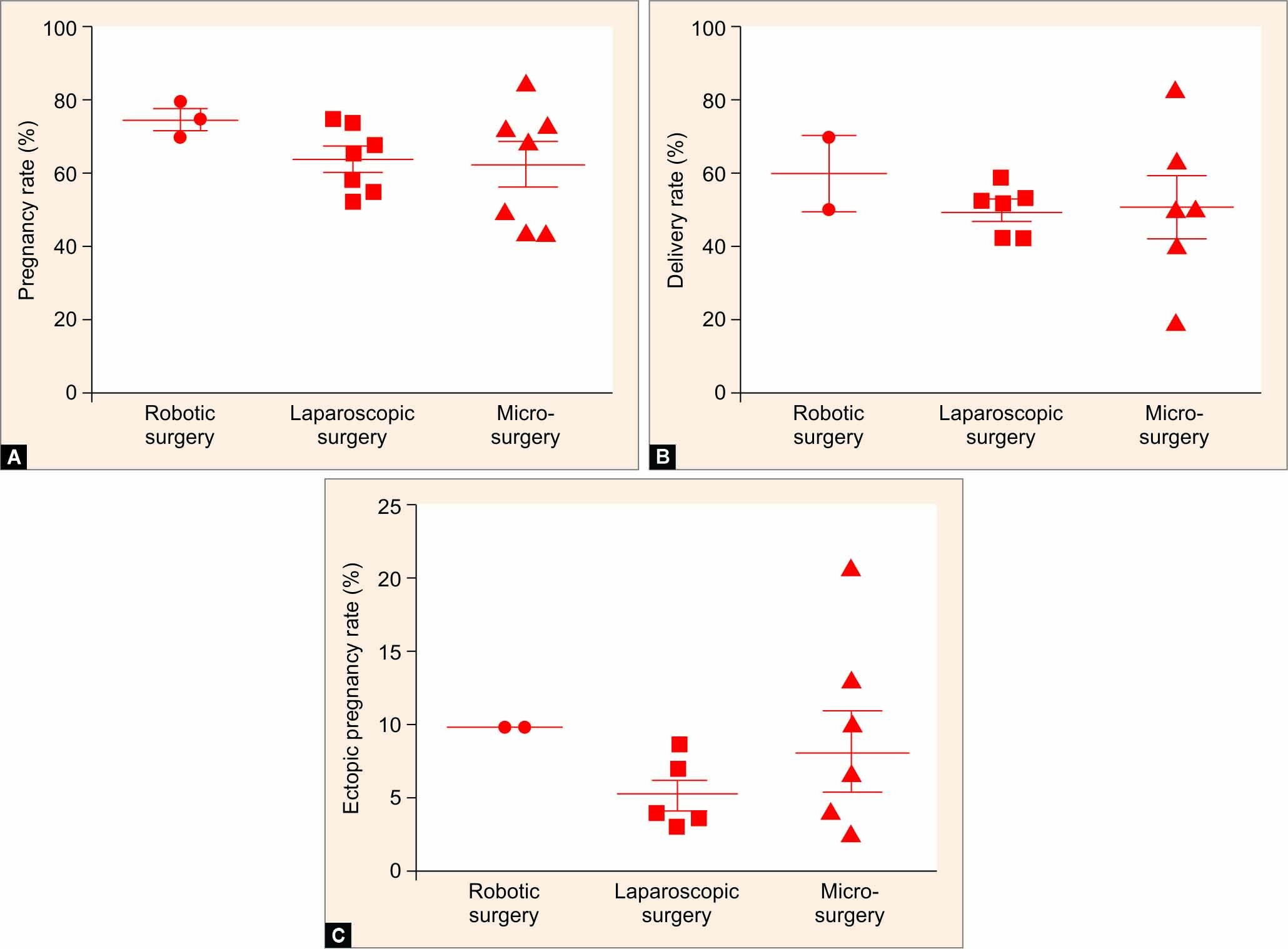 Figs 3A to C: Pregnancy rate (A), derlivery rate (B) and ectopic pregnancy rate (C) among different surgical approach of tubal reanastomosis

Some studies were conducted not only to evaluate the pregnancy outcome, but also to identify the possible factors that affect the pregnancy rate. One study including 71 subjects conducted by Paul et al. also evaluated the association with age, duration between sterilization-to-anastomosis, type of sterilization, and length of tube after reanastomosis. However, only length of remaining tube (more than 5 cm) was significant as a predictor for pregnancy outcome (p = 0.0056).20 In contrast, the remaining factors were not associated with pregnancy rate. This finding was relevant with the results of the study conducted by Jayakrishnan et al. in 2011, that found none of women (n = 29) from the subjects who had remaining tubal length less than 5 cm could conceive.22 Therefore, tubal length after reanastomosis is an important parameter to restore fertility status.

Surgical technique is also a point of consideration. Reanastomosis procedure has evolved since first introduced as macrosurgery reanastomosis, and then involving loupe or microsurgical reanastomosis. Laparoscopic approach has also recently improved into robotic-assisted reanastomosis to improve accuracy of the operation. However, according to our pooled data (Table 2), the pregnancy rate did not show any marked difference among various operation approaches. The more important factor is the sterilization procedure before. Pregnancy rate in women who underwent sterilization with the Pomeroy method had lower pregnancy rate (40%), in comparison to those who underwent laparoscopic tubal ligation (85.1%).22

Our results indicated that tubal reanastomosis is a feasible approach to restore the fertility status of the woman, as long as there are no other fertility problems. Our patient experienced a successful pregnancy within 1 year after four-stitch microsurgical tubal reanastomosis. From the systematic review conducted in this study, effectiveness of microsurgery is comparable to the more advanced approaches. Therefore, application of microsurgical tubal reanastomosis is not only feasible but also effective in reversing fertility status after tubal sterilization. Fertility restoration after female sterilization is not a myth, it is a hope.