Aim and objective: The purpose of this study is to assess the value of performing a detailed examination of the fetus for structural anomalies in a two stage screening process at first trimester nuchal translucency (NT) scan and mid trimester anomaly scan in general population.

Materials and methods: An observational study was conducted on 400 pregnant females referred to Department of Radiodiagnosis and Imaging in our hospital for NT scan at 11–13+6 weeks of gestational age. All women enrolled in the study were again subjected to traditional 18–22 weeks anatomy scan on follow up.

Conclusion: Early scan can be very helpful in early diagnosis of fetal anomalies. But as many abnormalities cannot be evident in early pregnancy due to ongoing fetal development, second trimester anomaly scan should also be performed along with early screening as two stage screening process.

In general population, incidence rate of major congenital abnormalities at birth is 2–3%, yet the reported rate of perinatal deaths due to these anomalies accounts for 20–25% and even higher percentage of perinatal morbidity.1 Ultrasound is the widely used method for screening and diagnosis of congenital structural abnormalities.2

Traditional anomaly scan also known as level II or Targeted Imaging For Fetal Anomalies (TIFFA) scan for detection of structural anomalies has been performed in second trimester of pregnancy at 18–22 weeks of gestation. However, due to improvement in technology, many of structural anomalies can now be detected in first trimester. Early detection of fetal anomalies in prenatal period allows for better perinatal management and providing expectant mothers with options for decision making.

Many recent studies supported the utility of sonographic detection of major fetal structural abnormalities in the first trimester of pregnancy.3,7 However, some anomalies will not be evident until later in the pregnancy due to ongoing fetal anatomical development. Detection rates (DRs) of anomalies vary according to the organ system being examined, equipment settings, and radiologist experience.8

A screening program for structural anomalies based on two ultrasound examinations, at 11–13 and 18–22 weeks, is gaining acceptance owing to the detection of an increasing number of anomalies in the first trimester. The purpose of this study is to assess the value of performing a detailed examination of the fetus for structural anomalies as a part of routine ultrasound scan in a two stage screening process in the general obstetric population.

An observational study was conducted on 400 pregnant females referred to Department of Radiodiagnosis and Imaging in our hospital for nuchal translucency (NT) scan at 11–13+6 weeks of gestational age, after getting informed consent and approval from Institutional Ethics Committee. Estimated gestational age was calculated based on last menstrual date or previous ultrasound report if periods were irregular or not sure of her last menstrual period. After getting basic history patients were subjected to Transabdominal ultrasound between 11 and 13+6 weeks and if fetal anatomy survey was not possible to be completed by transabdominal Ultrasonography (USG) alone, a transvaginal USG was performed after counselling and getting consent from the patient. All women enrolled in the study were again subjected to traditional 18–22 weeks anatomy scan on follow up using the transabdominal probe using Voluson E8 (BT 12) ultrasound machine with 3.5–5 MHz Trans abdominal transducer. No specific anatomic imaging protocol was followed. Multiple gestations were excluded from the study.

In the first trimester fetus, a thin layer of fluid is seen in the posterior nuchal region. This layer is called the NT, and its thickness can be measured with ultrasonography. An increased NT in the presence of a normal karyotype is associated with an increased frequency of many structural abnormalities as well as a variety of genetic syndromes. Therefore, an increased NT is an indication for detailed anatomic scanning of the fetus.9 NT of more than 95th percentile was considered as cut off for thickened NT.

Nuchal scan was performed transabdominally and whenever necessary transvaginally to assess the risk of major fetal abnormalities by taking into account the scan findings of NT thickness, nasal bone, ductus venosus flow, and tricuspid regurgitation.

The second trimester TIFFA SCAN also sometimes called the anomaly scan, anatomy scan, or level II ultrasound, is a pregnancy ultrasound typically performed between 18 and 22 weeks of gestational age. These ultrasound scans observe the fetus for soft markers, which are (subtle) anatomical variations or minor, usually transient, structural change that potentially indicate a risk of serious fetal anomaly but which in itself is probably insignificant.

The complete study of fetal anatomy per the guidelines laid out by ACR/AIUM/ACOG/ISUOG was attempted in every case.10,11 Follow up of the babies born was done and findings were corroborated. 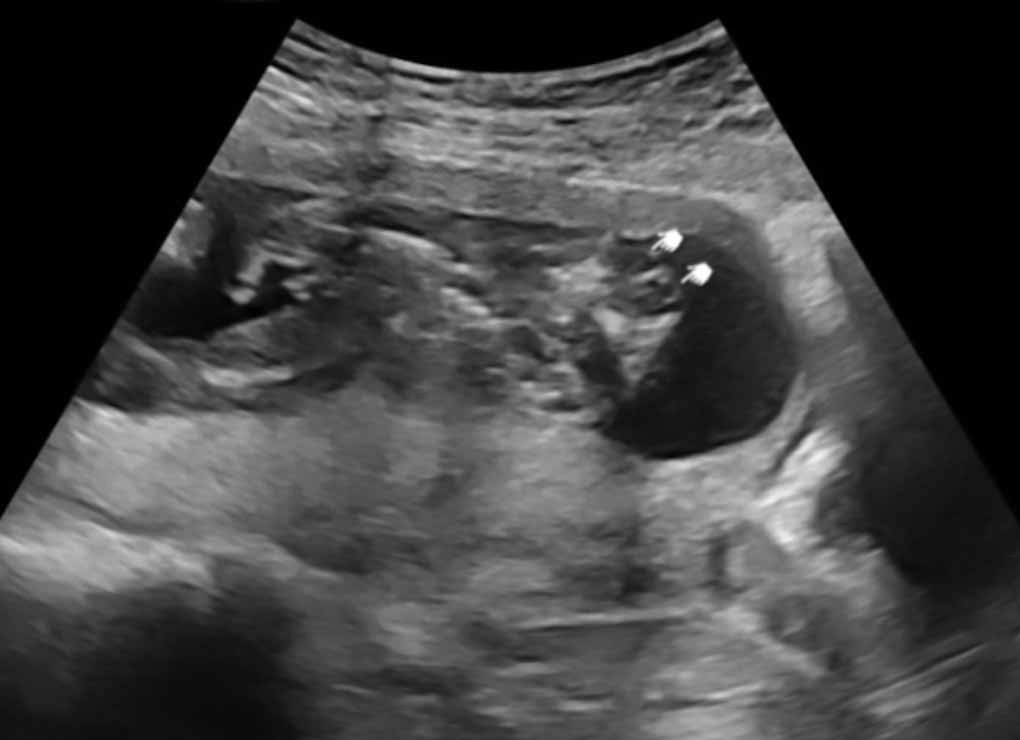 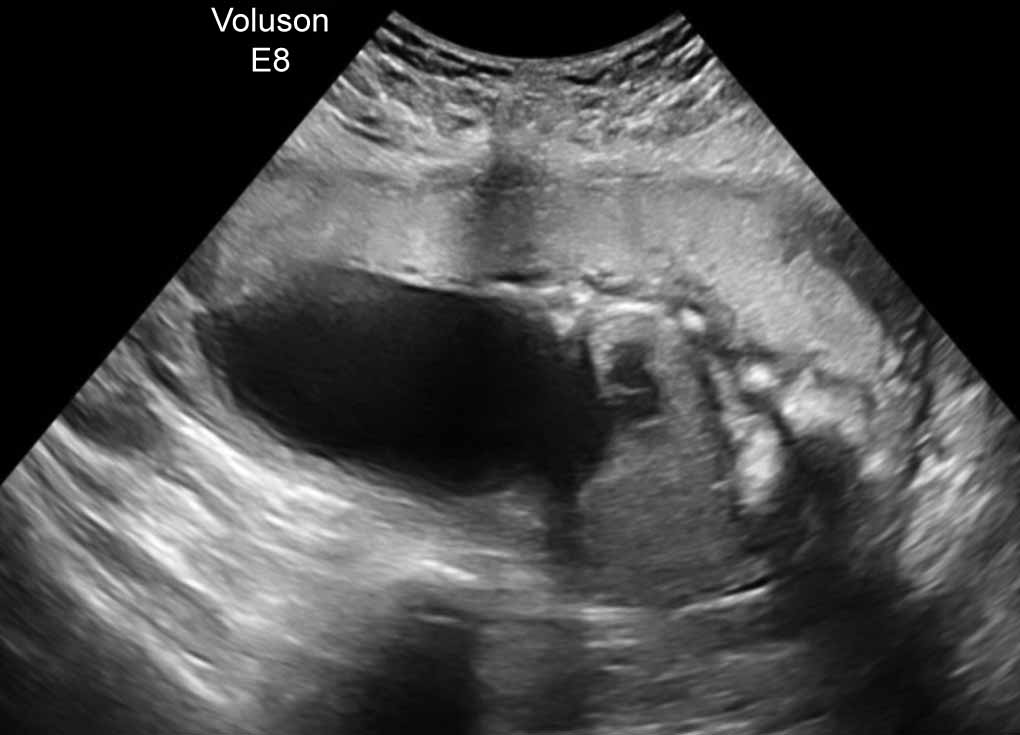 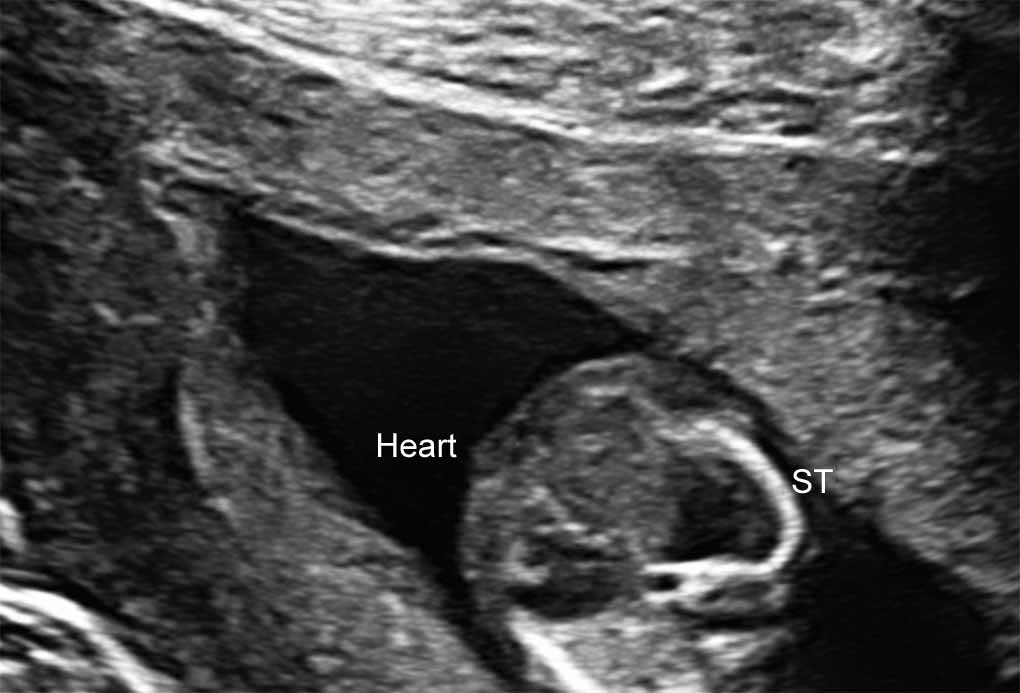 Fig. 5: Ultrasound image showing fetal diaphragmatic hernia as fetal stomach and heart are seen at same level with heart displaced toward right side 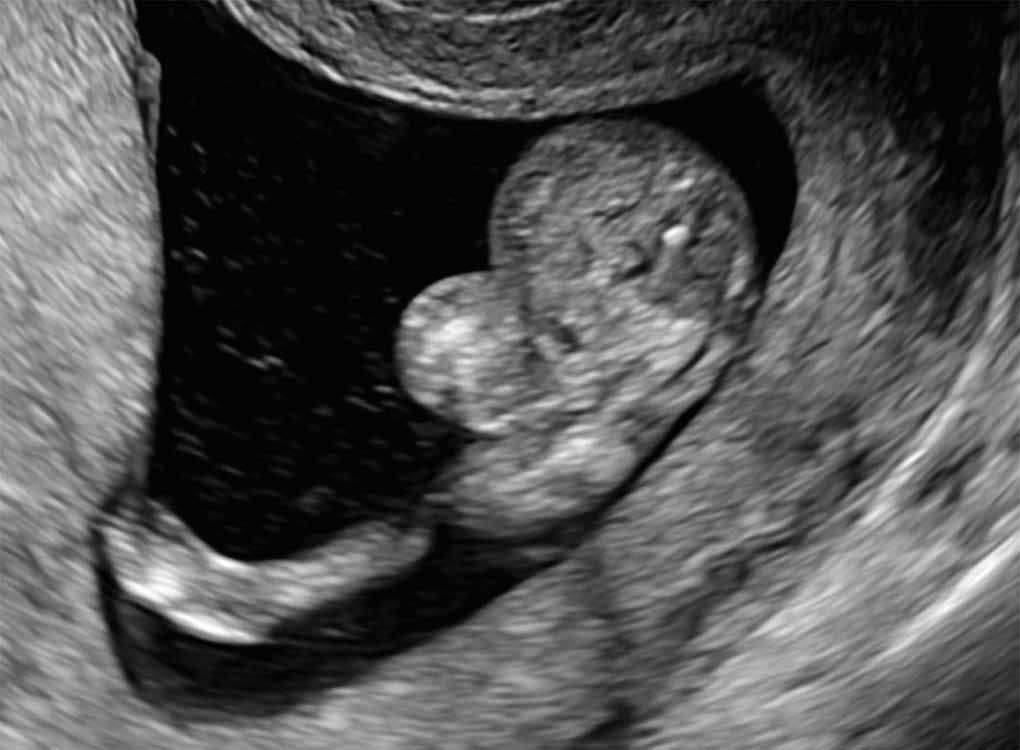 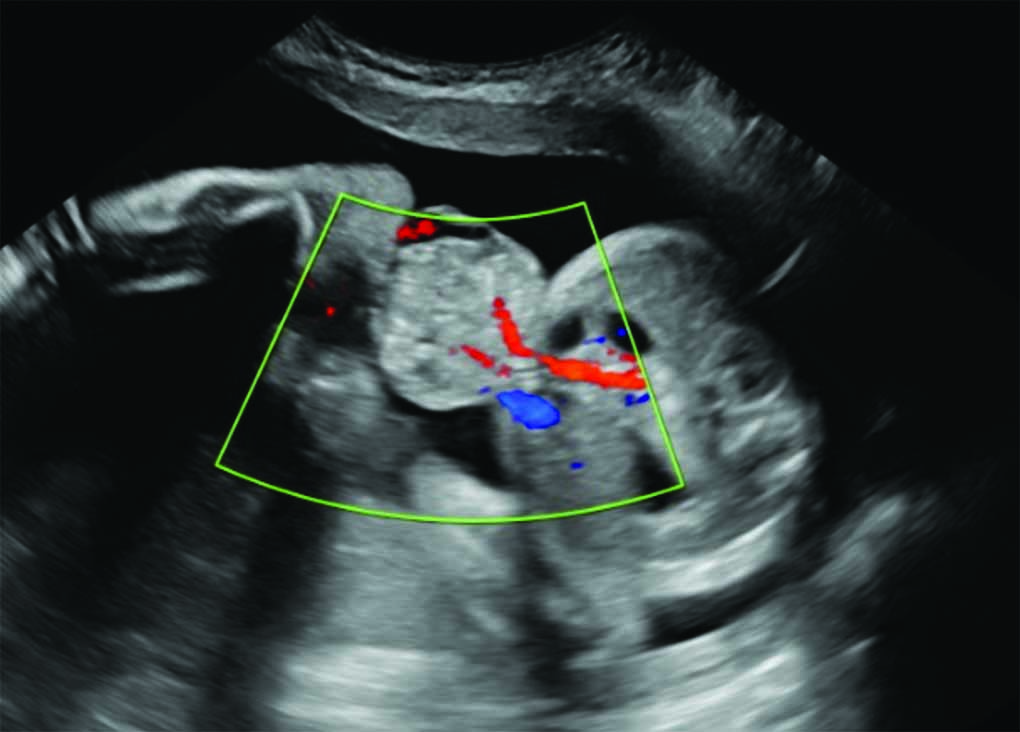 Fig. 7: Ultrasound image in a case of omphalocele showing herniation of bowel through abdominal wall defect 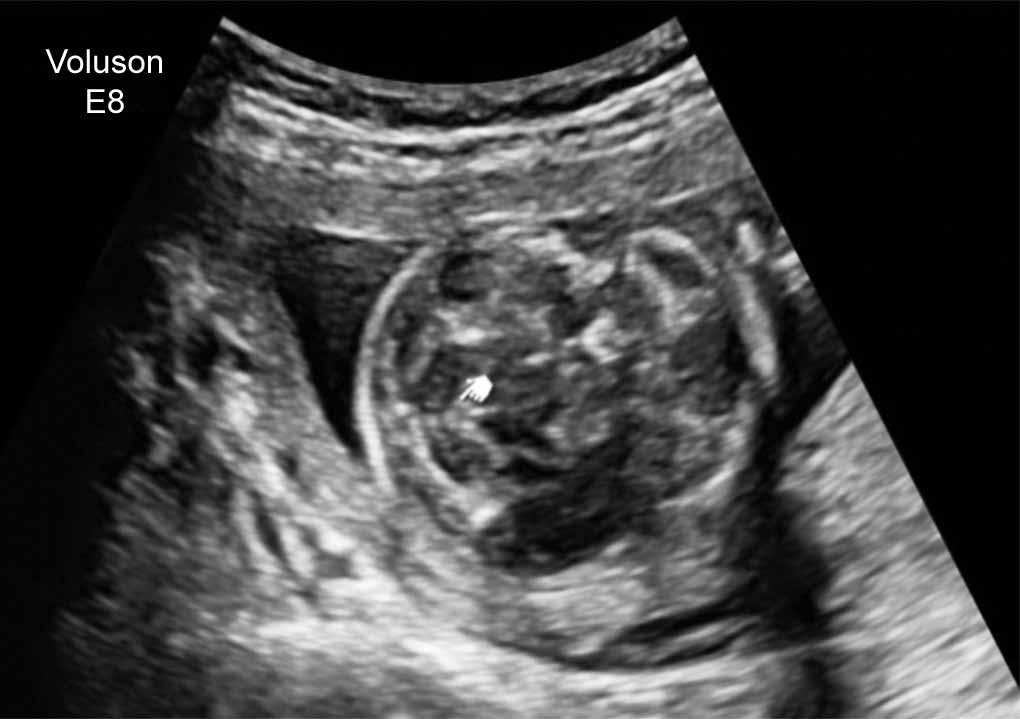 We found that many of the major anomalies can be diagnosed in first trimester at time of NT scan. But due to late development of some organs and late onset of some anomalies role mid trimester scan remain undisputed.

NT scan was done at 11–13+6 weeks and follow up scan was done at 18–22 weeks of gestational age in the present study. Time period of 11–13+6 weeks was chosen for early detection of abnormalities because in this time period, fetal anatomy was better visualized and NT could be measured at the same time. So no additional scan was required. This was feasible as both time and money were saved. Both major and minor anomalies were included in our study.

In our study, 66.6% of the anomalies identified at the time of NT scan which is in concurrence with other studies. Almost half of the malformations in our study were amenable to be diagnosed in first trimester as reported in current literature. These fetuses were having malformations like acrania, anencephaly, and gastroschisis, etc.13

Our study concluded that although higher percentage of abnormalities could be detected by early scan. But role of mid trimester scan is undisputed as some abnormalities could not be detected by early screening owing to late development of some fetal organs which is in concurrence with study conducted by Oztekin et al. The accuracy of early ultrasonography could be compromised by transient findings like midgut herniation, small septal defects, megacystitis, and hydronephrosis which might get resolved during intrauterine life.14

Most of the studies preferred extended protocol in which first trimester sonography was followed up by a second anomaly scan. The obvious edge of an extended protocol was that expected women were offered the option of earlier and safer termination of pregnancy for the severe or lethal abnormalities.16 Early ultrasound might be more precise than second trimester ultrasonography for detection of malformations associated with oligohydramnios and anhydramnios which lead to poor visualization at later gestation necessitating amnioinfusion.17

Early detection of fetal anomalies provide opportunity for early intervention and better management to expectant mothers. It will be safer for mothers to terminate the pregnancy in early period in case of lethal anomalies.18 However, the study had some limitations. Genetic testing was not performed in all the cases and follow up or autopsy of terminated fetuses was not done.

NT scan along with extended detailed anatomic survey at 11–13+6 weeks can detect substantial amount of the anomalies. Early diagnosis is beneficial for timely management of congenital malformations. Most importantly it helps in earlier and safer termination of pregnancy in case of lethal anomalies. Main limitation of early fetal anomaly scan is that majority of abnormalities are difficult to identify, due to ongoing fetal development and delayed onset of some anomalies. Thus, second trimester anomaly scan should also be performed along with early screening as two stage screening process. Good embryological and sonography knowledge is needed to avoid potential diagnostic pitfalls.