Aim and objective: Congenital rubella syndrome (CRS), a consequence of rubella virus infection in the first trimester of pregnancy is a silent crippling disease endemic in India. This study sought to find out and vaccinate rubella susceptible women attending a fertility clinic in an urban setup.

Materials and methods: As an institutional policy, all females attending fertility clinic were screened for anti-rubella IgG antibodies. A total 2272 non-duplicate serum samples received between January 2011 and December 2017 were processed using enzyme-linked fluorescent assay using mini VIDAS system following standard recommendations. Any value %3C;10 IU/mL was regarded negative, between 10 and 15 as equivocal and %3E;15 as positive.

Results: An average of 10.95% women was susceptible to rubella whereas 86.75% were immune to it. Samples from 52 women gave equivocal results and they were considered to be susceptible. All susceptible females were vaccinated with R-vac and treated for infertility one month after vaccination. Age-specific immune status was not significant. A trend analysis revealed steady increase in immunity from 2011 to 2017 with a slight drop in 2016.

Conclusion: The proportion of susceptible females of reproductive age who need to be vaccinated is significant. This study emphasizes the need for preconception screening as we would have an opportunity to vaccinate susceptible women.

Clinical significance: There is a need for preconception screening of rubella not only in infertile women but also normal reproductive age females. With successful eradication of polio, elimination of rubella and measles being the next targets, combined vaccination strategy is the key to rubella elimination.

Rubella virus, the causative agent of the mildest of common viral exanthems, is concerning due to the consequences if acquired in utero.1 An infection during early weeks of pregnancy leads to congenital rubella syndrome (CRS), which is a silent crippling disease endemic in India. More than one lakh cases of CRS may occur each year in developing countries alone.2 The manifestations of CRS in a child are multitude and the most common being Gregg’s triad (Cataracts, Cardiovascular defects and Deafness). Various studies attribute 10–15% of intrauterine infections to rubella and 1–60% of ocular abnormalities, 1.5–29% of congenital deafness, 30% of congenital heart disease to CRS.3 Rubella infection can also result in fetal death, still birth and spontaneous abortion.

Infertility is an underestimated problem world over. WHO estimates that one in every four couples in developing countries is affected by infertility.4 Based on the census reports of India, childlessness has risen by 50% since 1981.5 This translates into a huge number considering the population of India. Infertile women are considered to be the priority vaccination cohort, as any rubella infection in their subsequent pregnancy causes substantial physiological, psychological and economic burden on parents. Hence there are established protocols to investigate the rubella immune status of all infertile women before treating them.

Subclinical nature of infection and non-descript rash negate the reliability of history of infection as an index of rubella immunity. Demonstration of anti-rubella IgG antibodies by immunoassays is reliable as there is only one serotype of virus.6

There are no national estimates of risk of acquiring rubella among childbearing age females in India. With no national screening policy in place, it is difficult to gather that data. Screening of infertile women, a large subset of reproductive age females, might reflect the immunity to rubella in this age group. India has introduced the measles-rubella (MR) vaccine in five states and union territories (Karnataka, Tamil Nadu, Puducherry, Goa and Lakshadweep) in February 2017.7 The timeline of introduction of rubella vaccine is tabulated below as Table 1.8–10 Monitoring age- and sex-specific seroprevalence provides data for identification of necessary modifications to immunization strategy.

This study sought to find out and vaccinate rubella susceptible women among those attending a fertility clinic in an urban setup. This study also aimed to identify age-specific immune status of this cohort and to find out the trend of rubella immunity among infertile females between January 2011 and December 2017.

All the procedures followed were in accordance of the ethical standards laid down by the ICMR’s Ethical guidelines for biomedical and health research on human participants (2017). The study got clearance from institutional ethics committee. The study subjects were explained the purpose of the study and assured confidentiality. Written informed consent was taken before sample collection for prospective subjects.

All female patients attending the fertility clinic at the study Hospital.

Female patients of reproductive age with a primary complaint of infertility attending the fertility clinic were included in the study. Clinical definition of infertility, as given by WHO, as “a disease of reproductive system defined by the failure to achieve a clinical pregnancy after 12 months or more of regular unprotected sexual intercourse” was used in the study.11 Reproductive age was considered to be 15–49 years.

All consecutive, non-duplicate samples were included during the study period.

A total of 2272 non-duplicate serum samples were received for testing during the study period. They were processed using enzyme-linked fluorescent assay using mini VIDAS system (bioMerieux, France) following manufacturers’ recommendations.12 This assay combines a 2-step enzyme immunoassay sandwich method with a final fluorescent detection. The entire reaction was carried out in a solid phase receptacle (SPR) the interior of which was coated with rubella virus antigen. The intensity of fluorescence detected was proportional to the concentration of antibodies present in the sample. Fluorescence was calculated twice for each sample tested. The first reading was a background reading of the substrate cuvette and the second reading was taken after incubating the substrate with enzyme remaining on the interior of the SPR. The relative fluorescence value (RFV) was calculated by subtracting background reading from the final result.

At the end of the assay, the results were calculated by the instrument in relation to the calibration curve (4-parameter logistic model) stored in the memory and were expressed in IU/mL as per the WHO standard. Any value %3C;10 was regarded negative, between 10 and 15 as equivocal and %3E;15 as positive. Quality control of the test and calibration of the instrument were performed with each new kit or every 14 days, whichever is earlier.

Mean age (SD) of the patients was 30.47 years (5.25). Age range of the patients studied was 17–49 years. Mean age of females was higher when compared to other studies as the study group comprised of infertile females.

Out of 2272 serum samples received, anti-rubella IgG positive, equivocal and negative results were observed in 86.75%, 2.28% and 10.95% of samples respectively. Samples from 52 (2.28%) women gave equivocal results and they were considered to be susceptible. An average of 11.08% women was susceptible to rubella whereas 86.75% were immune to it. This implies that one in 10 females tested was susceptible to rubella, which is high.

The percentage susceptibility in this study (10.95%) is comparable to the result from the National Institute of Communicable Diseases which showed 12% overall susceptibility to rubella amongst pregnant women in Delhi from 1988 to 2002.13 These results are also in par with few studies conducted in adolescent and adult females in India.14 However, it is higher when compared to many other studies with adolescents or adult females as study subjects.15–17

Age-specific seroprevalence among girls, according to WHO, is a sensitive tool for risk assessment of CRS.2 An analysis of age-specific immunity in the current study yielded results as shown in Figure 1.

Highest immunity was noted in 45–50 years females followed by 21–25 years women. However this difference was not statistically significant (p = 0.45). Equivocal results were not observed in the extreme ages; the results were either clear negatives or clear positives. Four (23.52%) out of seventeen were rubella non-immune in the 15–20 years group. This higher susceptibility observed among 15–20 years age group could be due to undeveloped immunity. Similar results were obtained in as study conducted in Jordan.18 An improving trend with age in the rubella immune status was not evident in the present study (Table 2) as the age group studied comprised of adult females and not girls. In a study done in Saudi Arabia, there was a significant decrease in immunity with age (p = 0.0005). This difference could be due to the robust immunization program involving children.23

The total number of samples received and their year-wise split is given as Table 3. 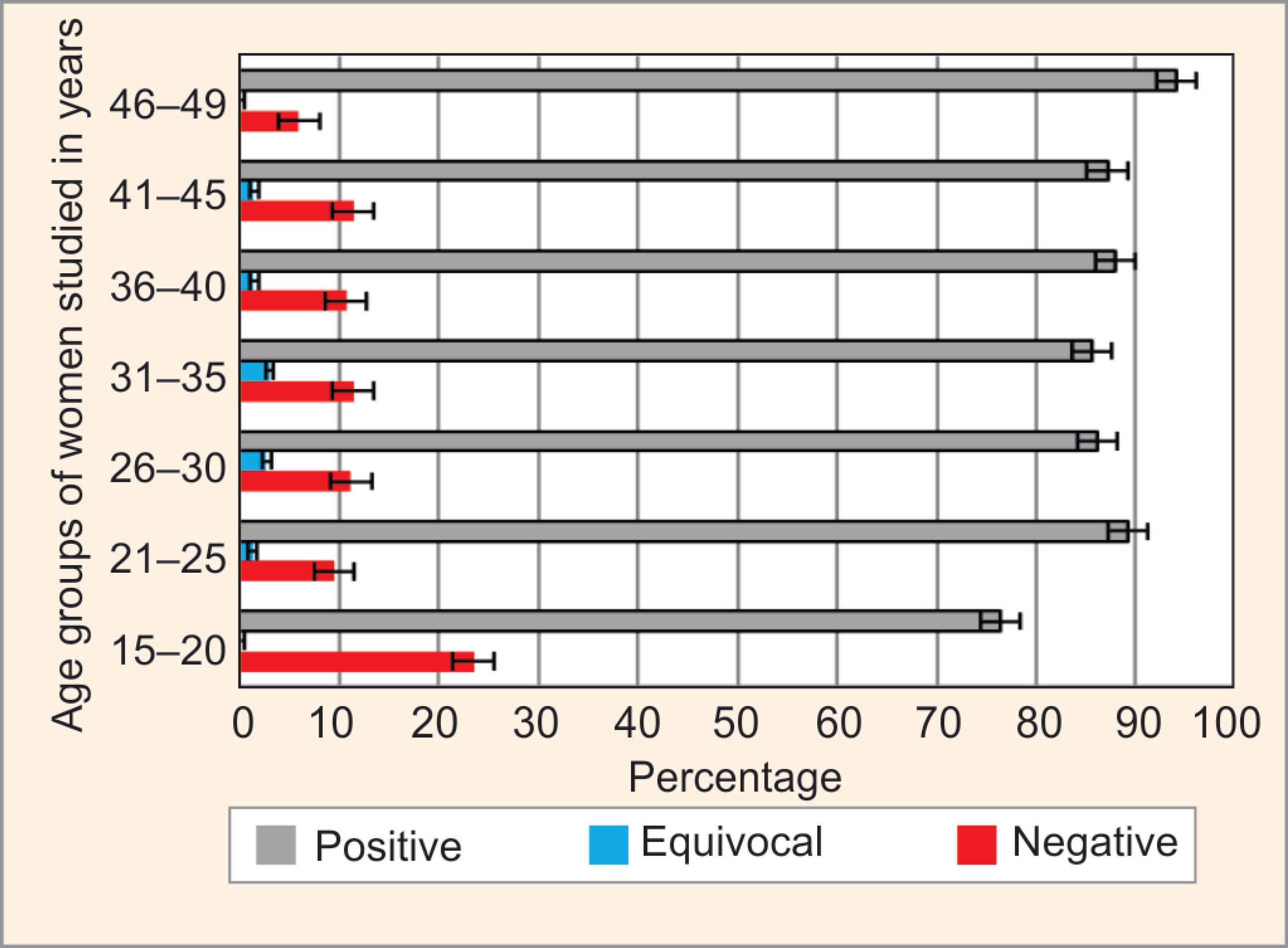 There was an increasing trend in seropositivity from 83.69% in 2011 to 88.6% in 2017 with a slight drop in the year 2016. A trend analysis revealed steady increase in immunity from 2011 to 2017, with a slight drop in the year 2016. This can be attributed to higher usage of MMR vaccine owing to increasing awareness in the recent past.6 Even with the increasing immunity, a substantial proportion of women were susceptible to rubella calling for a robust program.

The trend of rubella seropositivity is depicted as a line diagram in Figure 2. A cumulative trend is also depicted in the same graph assuming that all females who were seropositive remain so during the study period.

All susceptible females (whose samples yielded either negative or equivocal results) were vaccinated with R-vac (Serum Institute of India Ltd) and treated for infertility one month after vaccination. Testing for seroconversion post-vaccination was not attempted as the vaccine is effective.24

There are two strategies to prevent CRS: CRS reduction and rubella/CRS elimination. The direct strategy aims to vaccinate adolescent girls to prevent infection among them, but cannot prevent transmission of rubella virus. The indirect strategy aims to immunize children before they are naturally exposed to infection and interrupts rubella virus circulation. However, it might increase the probability of rubella outbreaks among adult population and CRS as occurred in Greece.25,26 The implementation of either strategy is dependent on many issues, such as infrastructure, goals of the program, and funding.27

Countries that have not introduced rubella vaccination may introduce it along with the accelerated measles control and elimination (according to updated WHO rubella vaccine recommendations).29 The preferred strategy for this is to initiate a campaign with MR/MMR vaccine targeting a wide range of ages and immediate introduction of MR/MMR vaccine into the national immunization program. As a welcome sign, Government of India has taken initiative to give MR vaccine to all children aged 9 months to 15 years, starting with 5 states. Expanding the provision of MR vaccine to other states and continued surveillance of vaccination are key steps to achieve elimination of measles and control of rubella by 2020.

* Note: All equivocal samples were considered to be negatives for the above statistical calculation 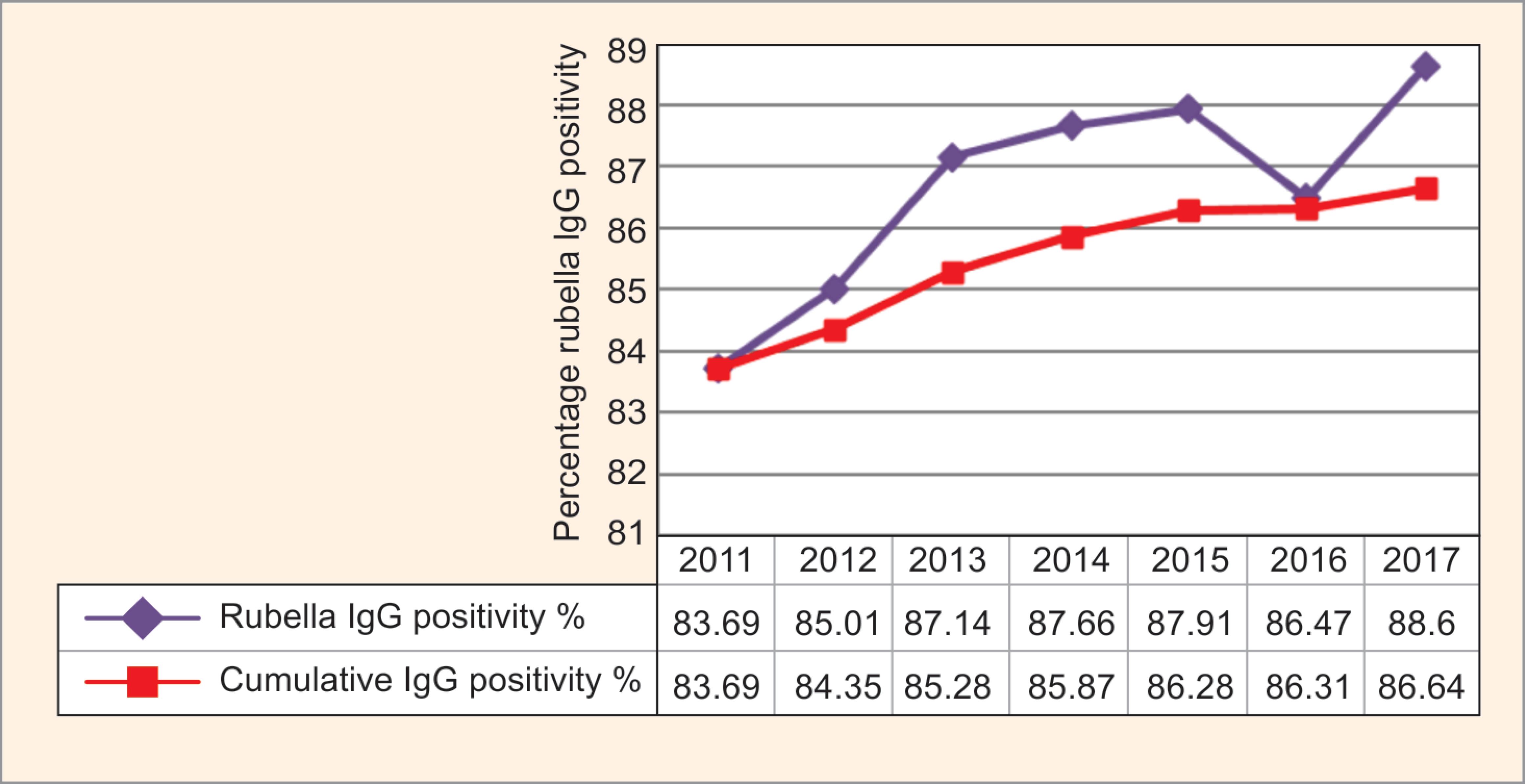 Strengths and Limitations of Study

This study is novel with respect to study subjects being infertile, non-pregnant women. Though this data might not truly represent rubella immunity among females in the community, it gives an estimate of the susceptibility levels. Data from our hospital was not available to compare with susceptibility among antenatal/adolescent females.

This study emphasizes the need for preconception screening as we would have an opportunity to vaccinate susceptible women. Age-specific immunity in this population cohort is not very informative and requires further studies. Though improving immunity to rubella year by year is a welcome sign, still the proportion of susceptible females of reproductive age who need to be vaccinated is significant. With successful eradication of polio, elimination of rubella and measles being the next targets, combined vaccination strategy is the key to rubella elimination.

The author would like to thank the whole Department of Microbiology and Infertility Clinic, Krishna Institute of Medical Sciences Ltd for their support.

7. Ghosh A, Measles-Rubella Vaccine to Roll Out in February. The Indian Express; 10 January, 2017. Available from: http://www.indianexpress.com/article/india/measles-rubella-vaccine-to-roll-out-in-february-4467248/ .[Last cited on 2017 Dec 14].