“One Size does not Fit All” during Ovarian Stimulation for IVF

Ovarian stimulation (OS) is the heart of IVF. Various OS protocols are developed and many of them are still being explored to provide an individualized approach, making the care more patient-centric. Premature LH surge is one of the potential side effects accompanying the OS, and to prevent this phenomenon either GnRH analogs or progesterone are being used. The following case report is of a PCOS patient undergoing COS using progesterone-primed ovarian stimulation (PPOS) which was modified by adding GnRH antagonist in the middle of stimulation due to accelerated growth of a single follicle in one ovary. The premature luteinization was prevented and the stimulation cycle was salvaged, giving a good outcome in terms of mature oocyte, grade of embryos, and pregnancy. This case report emphasizes the importance of strict monitoring as well as an individualization of each stimulation cycle to case to case basis for achieving the best outcome.

The field of IVF has been expanding exponentially since its very origin in the year 19781 and along with it approaches to controlled ovarian stimulation (COS) for IVF are also been explored in a continuum. The COS has been evolved from the Nordstrom approach which stated “one size fits most” to individualizing the approach, making the case for shared decision-making and patient-centered care.2 In this case report, we emphasis the importance of strict monitoring as well as individualization of each stimulation cycle to case to case basis.

Mrs X aged 27 years and Mr Y aged 34 years presented to our hospital with primary infertility of 2 years. They were married for 2 years. Mrs X had irregular periods and used to bleed every 2–3 months. Her HSG was done showing bilateral patent tubes. Her USG pelvis showed bilateral ovaries with polycystic morphology. Mr Y had semen analysis showing isolated asthenozoospermia with total motility of 25% and progressive motility of 16% but rest parameters were in the normal range. The couple was aware of the fertile period and had no significant sexual history. They had undergone four cycles of ovulation induction and timed intercourse and one cycle of IUI, with tablet letrozole along with injection gonal F but failed to conceive. After a thorough review of their history and clinical examination, the couple was counseled and they decided to go ahead with one cycle of IUI but again failed to conceive. The couple then decided to go ahead with IVF. Mrs X was started on IVF-M 225 IU from day three of her menses and progesterone-primed ovarian stimulation (PPOS) protocol was used as she was a case of PCOS and the fresh transfer was not planned (Table 1). Till day 4 of stimulation, follicles were growing synchronously but on day 6 of the scan, the lead follicle had reached the size of 21 mm on the right side. LH levels were checked to rule out any premature LH surge and they were 7.49 which were well within the limit. The tablet meprate dose was increased to 10 mg BD from 10 mg OD and the rest same dose of gonadotropins was continued for two more days. On stimulation day 8, the lead follicle of the right side had reached the size of 31.5 mm but the rest of the cohort in both ovaries was synchronous. The hormonal profile showed E2: 6,070, LH: 11.02, P4: 1.54. Injection cetrotide 0.5 mg OD and tablet cabgolin 0.5 mg per vaginally were added along with the ongoing medications. On the 9th day of stimulation, the lead follicle had reached 34 mm on the right side but the rest of the cohort still showed synchrony. Her hormonal profile was E2: 6,404, LH: 1.36, P4: 0.88. The dual trigger was given using injection decapeptyl 0.2 mg and injection ovitrelle 0.25 μg and the patient was posted for ovum pick up after 34 hours. On retrieval, 14 oocytes were obtained with 9M2, 4 GV, 1 abnormal. The 9M2 were subjected to ICSI which resulted in 4x8CG1 + 4x8CG2 embryos. All the embryos were frozen for the prevention of OHSS.

The couple underwent the first cycle of FET-HRT in the next menstrual cycle. Three 8 cell grade I embryos were transferred and proper luteal phase support was given. The patient conceived with serum beta-hCG of 901 mIU/mL, after 14 days of transfer. The doubling of beta-hCG was in normal range (Table 2).

The early pregnancy scan at 5.2 weeks showed a single intrauterine gestational sac corresponding to 5.6 weeks according to CRL (Fig. 1). At 8 weeks of gestation age, scan was repeated again with CRL corresponding to 8.5 weeks and fetal heart of 156 beats per minutes (Fig. 2). Mrs X is ongoing pregnancy of approximately 20 weeks with no complications. 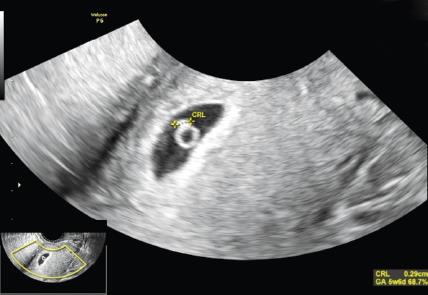 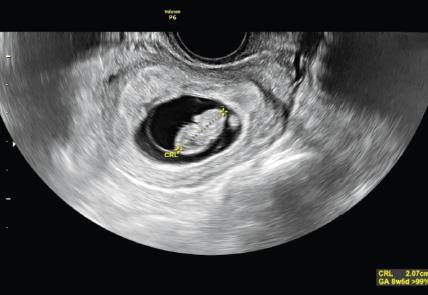 Luteinizing hormone has important roles in the luteinization of the follicle and the functional maturation of the nucleus of the oocyte. Abnormalities in either follicular phase LH levels or the LH surge may impair the development of the oocyte and the oocyte’s fertilizing ability.3

The pivotal event of LH surge that induces ovulation and reprograms the ovary to produce large amounts of progesterone as well as estradiol is due to orchestrated actions of estradiol, progesterone, and kisspeptin in the brain.

In conventional ovarian stimulation protocols, the administration of exogenous gonadotropins maintains FSH and LH concentrations above a critical threshold needed to stimulate the development of many follicles, thus allowing the retrieval of multiple oocytes in a single cycle.4 The most prominent endocrine change to occur during multiple follicular developments is the rapid increase in circulating concentrations of estradiol so that they soon become supraphysiological. Consequently, the threshold of the positive feedback effect is exceeded early, i.e., almost by day 8 of the cycle, increasing thus the possibility of the occurrence of a premature LH surge, i.e., a surge occurring before full follicle maturation, leading to spontaneous ovulation and the consequent premature end of the respective cycle. A premature LH surge can be detrimental to the treatment outcome as it results in premature luteinization.

Premature LH surge can be defined as an LH level of ≥10 mIU/mL, and a progesterone level of ≥1.0 ng/mL occurring before the criteria of hCG administration is met.5–9

In women with PCOS, premature LH surge occurs in 20–26% of the COS cycles.10,11 The elevated LH levels in the follicular phase can affect oocyte quality by early resumption of meiosis leading to premature oocyte maturation and ovulation which in turn causes lower implantation or increased miscarriage rates.12

To prevent this phenomenon of premature LH surge, GnRH analogs are used most commonly. Recent studies have shown that exogenous progesterone administration can also achieve the same with added advantages of easy administration and decreased cost establishing a new PPOS protocol.

Whereas a study comparing PPOS to antagonist protocol in PPOS population has shown comparable results in terms of ongoing pregnancy rates per transfer but decreased incidence of OHSS with PPOS group.15

In this case, after starting a PPOS protocol, one follicle in the right ovary showed accelerated growth measuring 21 mm, on stimulation day 6, whereas the rest of the cohort of follicles remained synchronous. To prevent premature luteinization, meprate tablet was increased to twice a day, still, on the eighth day of stimulation, the lead follicle of the right side increased to 31.5 mm. The GnRH antagonist was added to the stimulation from the eighth day of stimulation for better suppression of LH surge. The trigger was given on stimulation day 9 when most of the follicles of both ovaries had reached a diameter of %3E;17 mm and the lead follicle of the right side had reached 34 mm.

Despite one postmature follicle being present throughout the stimulation, we effectively saved this stimulation cycle from getting canceled by judiciously using a combination of both progesterone and GnRH antagonist to prevent LH surge. We managed to obtain eight embryos with four 8CG1 and 8CG2 each after performing ICSI.

Ovarian stimulation is a critical step in in vitro fertilization therapy. Various controlled ovarian hyperstimulation regimens are available, but individualization of management is essential for each case depending upon the response to ongoing stimulation. It is justified to modify an existing protocol to salvage a stimulation cycle.