Source of support: This article is extracted from Master’s thesis of Zahra Marashi, and the research project with number: RHPRC-9717. This research was supported by the vice-chancellor for research of Ahvaz Jundishapur University of Medical Sciences.

Materials and methods: Sixty-eight women with infertility randomly allocated into two groups: CBT (n = 34) and control (n = 34) groups. The women in the CBT program were divided into two subgroups of 12 and one group of 10, with each receiving eight therapy sessions (each session lasting 90 minutes). Psychological well-being was measured using a demographic questionnaire and the short-form Ryff Psychological well-being scale. The independent and paired t-tests, Chi-square, repeated measures, and ANCOVA tests were used to analyze the data.

Results: Two women from the CBT and three from the control groups withdrew from the study. In the CBT group, the general psychological well-being score and self-acceptance, positive relationship, autonomy, purpose in life, personal growth, and environmental mastery dimensions’ scores were improved after the intervention. The scores also were significantly higher in the case group than those in the control group (p %3C; 0.001).

Infertility is defined as a failure in pregnancy after one year of intercourse without the use of any contraceptive method.1 Many people consider infertility the saddest and the most stressful experience of life and describe repeated periods of treatment as repeated periods of crisis.2 More than 50 million couples worldwide are suffering from infertility.3 The experience of infertility can lead to psychiatric disorders such as depression, anxiety, helplessness, interpersonal relationship problems, low self-acceptance, low self-confidence, isolation, and identity issues.4 In Iran, psychiatric disorders and personality instability in infertile women are approximately twice that of fertile women and these women have lower psychological well-being.5 Psychological well-being is a psychological variable that affects infertile women.6 There are different types of well-being, including subjective, emotional, social, spiritual, and psychological well-being.7 Mental well-being is defined by happiness, pleasant success, and pain avoidance,8 but the psychological well-being requires an understanding of the challenges of life, and the growth and development in face of them, and places great emphasis on human development.9

Another psychological intervention is cognitive-behavioral therapy (CBT) which is considered a combination of therapeutic cognitive and behavioral techniques.12 This therapeutic method focuses on the relationship between thinking, emotion, and behavior and emphasizes the central role of thinking and its related processes. Cognitive therapies encourage the patients to test the relationship between their negative automatic thoughts and their feelings and consider behaviors that are the results of negative thoughts as a criterion for evaluating those thoughts.13 Studies have emphasized the various effects of CBT on psychological functions. Ahmadi et al. showed that CBT leads to the improvement of mental image in infertile women.14 Also, Mosalanejad et al. showed that CBT improves mental health and hardiness in infertile women.15 Besides Talaei et al showed in their study that CBT reduces depression in infertile women.16 Other research has shown that CBT improves psychological well-being in women with other problems, including breast cancer by improving their sexual identity and their self-acceptance,17 and in cardiac diseases by improving their personal growth and their purpose in life.18 Further studies concerning the frequency of psychiatric disorders in infertile women and the importance of mental health and its possible impact on the results of infertility treatment are essential.19 The present study intended to investigate the effect of CBT on the psychological well-being of infertile women.

This randomized controlled trial study was carried out among infertile women attending the antenatal infertility clinic of Imam Khomeini Hospital in Ahvaz, Iran, between April and September 2019. The participants were recruited as per inclusion and exclusion criteria.

Inclusion criteria were including the statistical population of this study was infertile women referred to the infertility clinic of Imam Khomeini Hospital in Ahvaz City in 2019. Inclusion criteria were included: age 20–45 years, primary infertility, ability to read and write, infertility-related stress based on a score lower than the average of the psychological well-being questionnaire. Exclusion criteria were including pregnancy, severe mental illness that requires medication, such as major depression and dementia or other severe mental disorders, more than twice absenteeism in counseling sessions, having an adopted child, and having a history of stressful life events in the past 6 months that lead to hospitalization in a psychiatric ward based on the information in the patient’s medical records.

The protocol of this study was approved by the ethics committee of the Ahvaz Jundishapur University of Medical Sciences, (IR.AJUMS.REC.1397.931). The objectives of the study were explained to the participants and they were assured about confidentiality; also, informed consent (oral and written) were obtained from all the participants. This study was also registered in the Iranian registry of clinical trials (registration code: IRCT20190311043019N1).

The sample size was calculated using the formula below17: 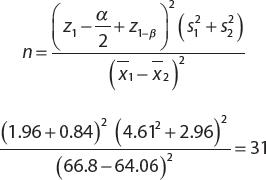 The sample size was estimated to be 34 in each group based on a 10% attrition risk.

Ryff developed the Ryff Psychological Well-being Questionnaire in 1989 and updated it in 2002. The main form of the questionnaire included 120 questions, but the 18 questions type was used in this study. The Likert score range is between 1 (I totally disagree) and 6 (I totally agree). Ten questions are directly scored and eight questions are scored in reverse. The lowest score is 18 and the highest is 108. This questionnaire contains six components and the total score. A higher score equals higher psychological well-being. The components of the Ryff questionnaire are including self-acceptance, positive relationship, autonomy, purpose in life, personal growth, and environmental mastery. The validity and reliability of the Ryff Psychological Well-being scale were confirmed by Keyes et al. with Cronbach’s α measured at 0.89,6 and in Iran, Khanjani et al. have confirmed it, with a Cronbach’s α of 0.71.20

Women who were qualified and gave their consent were randomly allocated to one of two groups: CBT or control. We used block randomization with a block size of 4 and a 1:1 allocation ratio. Every woman was given a code for allocation concealment, which was stored in an invisible sealed envelope by the clinic secretary until the start of the counseling.

The CBT group received eight weeks of counseling focused on CBT21 (one session every week), while the control group received no intervention. Two groups of 12 and one group of 10 participated in the counseling sessions. Each session lasted 90 minutes. In each session, one researcher (ZM) first reviewed the concepts and homework of the previous session and then presented new content and tasks. A summary of the content of the treatment sessions is given in Table 1. At the end of the intervention, the control group obtained one CBT compact disk (CD). In this study, blinding the researcher and participants was not possible.

SPSS Inc. USA, Chicago, Illinois, version 23 was used to enter all of the data. Missing values were imputed by multiple imputation procedures. The Kolmogorov–Smirnov test was used to assess the normality of the data distribution. The independent t-test or Mann–Whitney test was used to compare continuous data between the two groups, and the Chi-square test was used to compare categorical data. To compare continuous data within the groups, the paired t-test and repeated measures tests were used. To neutralize confounding effects, an analysis of covariance was used. In this analysis, the test power was 90%, and the level of significance was set at p < 0.05.

The outcome was to evaluate the effect of CBT on the psychological well-being of infertile women.

This research aimed to see the effect of CBT on the psychological well-being of infertile women. The results showed that there was a significant difference between the two groups in terms of duration of treatment. Prolonged infertility treatment increases psychiatric problems.16 The findings revealed that CBT improved self-acceptance in infertile women. In other words, CBT helped reinforce the self-acceptance dimension by training the cognitive restructuring and self-esteem skills.13 This result was in line with the findings of Bavadi et al. which states that CBT helps women who suffer from breast cancer to love themselves as they are.17 Cognitive-behavioral therapy was also effective in improving positive relationships with others in infertile women significantly. Cognitive-behavioral therapy helped women to effectively deal with others through communication training and self-control skills.22 Roothman et al. reported that CBT could enhance the social aspects of psychological well-being such as positive relationships with others.23 In the present study, we found that CBT positively affected the autonomy dimension of infertile women. Cognitive-behavioral therapy led to a reinforcement of autonomy through training for cognitive restructuring.6 It is in line with the findings of Faramarzi et al.’s study which states that CBT is effective in decreasing fertility stress in dimensions of the social concerns, restructuring, and eliminating negative automatic thoughts, and improving autonomy.24 Also, the present study demonstrated that CBT is effective in enhancing infertile women’s sense of meaning, which is in line with the findings of Faramarzi et al.’s study.24 Cognitive-behavioral therapy enhances purposefulness through decision-making skills and understanding the consequences. This observation is consistent with the findings of Abdolahi et al. which showed that CBT expands conscious imagination and increases purposefulness in infertile women suffering from anxiety and depression.25 Additionally, CBT improved the personal growth of infertile women. This finding is consistent with the results of Keyes et al.’s study which found that CBT improved self-efficacy and helped personal growth.6 Also, Abdolahi et al. showed that CBT could greatly increase infertile women’s personal growth.25 The present study also showed that CBT contributed to improving the environmental mastery in infertile women. It also helped individuals create the desired environment via problem-solving skills and interaction.24 This finding is consistent with the results of Hamzeh Pour’s study which found that CBT enhances interaction and environmental mastery and reduces the level of anxiety, depression, and other psychological problems by focusing on attitude, identifying and correcting cognitive distortions and thoughts for infertile women suffering from anxiety.26 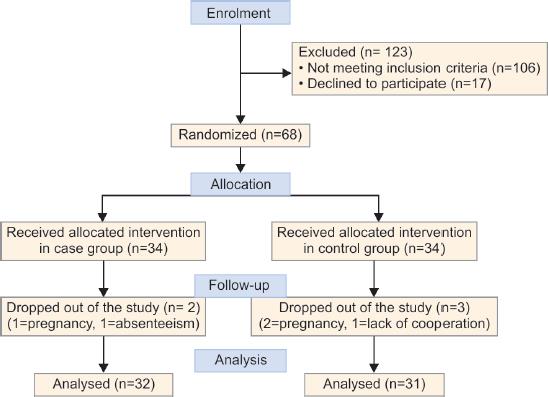 Flowchart 1: Flowchart of recruitment and retention of women in the study

Values are presented as mean (SD)

Overall, the results of this study showed that CBT is effective in improving psychological well-being in infertile women. To explain, the CBT emphasizes on awareness of cognitive distortions and its destructive effects. The therapist helps the patient to identify and modify their irrational beliefs.18 The results of the present study are consistent with Espie et al.’s study that found CBT leads to improving psychological well-being and quality of life in patients who suffered from insomnia.27

THE STUDY’S STRENGTHS AND LIMITATION

This is the first research to look at the impact of CBT on psychological well-being in infertile women with a 1-month follow-up. However, there are some limitations to this study. First, recall bias can influence responses to psychological well-being questionnaire questions. Second, this study was not blinded, and neither the researchers nor the women knew which group they were in until the intervention.

This study found that CBT can improve all aspects of psychological well-being, including self-acceptance, positive relationships, autonomy, purpose in life, personal growth, and environmental mastery dimensions in women with infertility. More research with a longer follow-up period is suggested.