Introduction: Conjoint twins are a rare form of twins. Its incidence ranges from 1 in 50,000 to 1 in 100,000 live births. Associated with multiple anomalies, it has very high morbidity and mortality. Ultrasound has not only overcome the diagnostic dilemmas and pitfalls but has helped to characterize the site, extent of conjoining which often decides the prognosis and offers varying outcomes when surgical separation is attempted.

Case description: A Gravida 3 Para 1 Living 1 abortion 1 with previous LSCS at 13 weeks presented for the first time to confirm pregnancy. Ultrasound showed monochorionic twin pregnancy. Two cranial vaults, thorax with 2 cardia were seen separately. The abdomen of the twins was not clearly discernible. Twin B had a cystic swelling in the umbilical area and the lumbosacral area. A working diagnosis of conjoint twins with umbilical cord cyst and meningocele was made. The patient was counseled about the prognosis. The patient opted for termination of pregnancy. An autopsy showed an omphalopagus type of conjoint twins with sharing of the intestines from the ileocecal region with omphalocele at the joining site and meningomyelocele in twin B.

Conclusion: Diagnosing conjoint twins is a dilemma. Once diagnosed a “Pandora box” is opened. The trouble starts here, with its classification, extent of duplication, and looking for other associated anomalies. When diagnosed, early termination of pregnancy is an option. The late diagnosis makes management difficult with increased risks in preterm labor, intrauterine death, stillbirths, cesarean delivery, and problems of surgical separation with varying prognoses.

Conjoint twins are the rarest form of monozygotic twinning with an incidence of 1 in 50,000 to 1 in 100,000 live births.1 In general, there is a greater association of twins with congenital anomalies, and the later the division, the higher the chance of congenital anomalies.2 So, it is expected for conjoint twins to be associated with multiple anomalies; the liveborn twins challenging the medical expertise. Early prenatal diagnosis would not only increase the options for management but also helps in deciding if further investigations and genetic testing are required. Based on this, the patient can be offered an accurate prognosis and can actively participate in decision-making. The site, extent of conjoining, and the associated anomalies decide the prognosis and offer varying outcomes when surgical separation is attempted.3 The overall survival of conjoint twins is 25% but in >90% of the cases, either a termination, stillbirth or neonatal death is seen.4,5

A 28 years, gravida 3 with one living child had her first booking visit at 13 weeks. This was her first scan. She was unaware of her pregnancy as she had bled only once after her previous delivery 1 year ago. She had the wrong dates. Transvaginal and transabdominal ultrasound [9–5 MHz probe with 2D Doppler US (Voluson P8 GE medical system)] at 12+ weeks of gestation showed a twin pregnancy in a single gestational sac with no intertwin membrane and a single posterior placenta. Monochorionic twin pregnancy was confirmed, but it was observed that both the head and the bodies were constantly maintaining the same parallel relationship at all times throughout the scan. The nuchal translucency of the twins was 1.7 and 1.8 mm, respectively. To rule out the probability of conjoint twins, she was subjected to multiple scanning at different time intervals. The same parallel relationship was maintained in all the follow-up scans. Two cranial vaults, thorax with 2 cardia were seen separately (Fig. 1). However, below the chest, the abdomen of the twins was not clearly discernible from one another. The urinary bladder of the twins could not be made out. The spine of twin A was normal and other structures from the thorax lower down were difficult to comment on. Twin B had a cystic swelling in the umbilical area with clear anechoic fluid within and no other details could be made out and a probable diagnosis of umbilical cord cyst was made. Twin B also had a cystic swelling in the lumbosacral area and a diagnosis of meningocele was made (Fig. 2). With the working diagnosis of conjoint twins of the omphalopagus variety with meningocele and umbilical cord cyst in one twin, the patient was counseled about the ultrasound findings. She opted for termination of pregnancy. The termination was performed as per FIGO protocol with oral misoprostol. 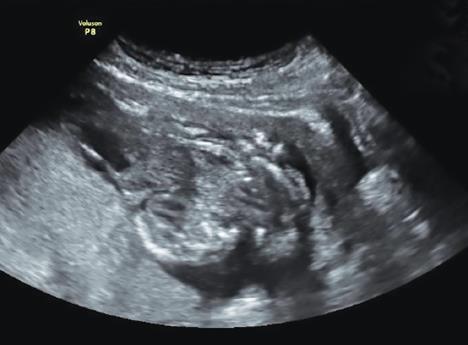 Fig. 1: Ultrasound image of the twins showing two separate cardia and fused abdomen below it 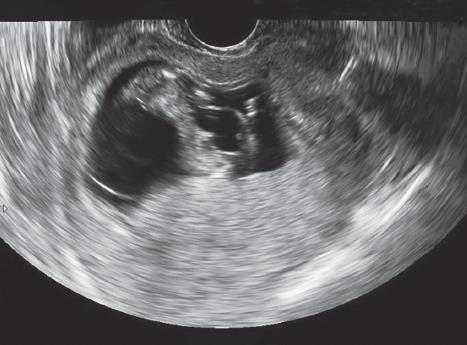 Fig. 2: Ultrasound image of twin B with omphalocele anteriorly and meningocele posteriorly 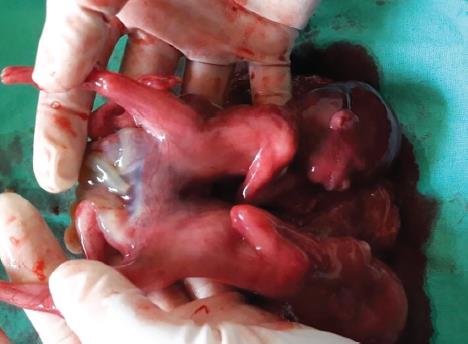 Fig. 3: Autopsy picture of twins conjoined at the abdomen 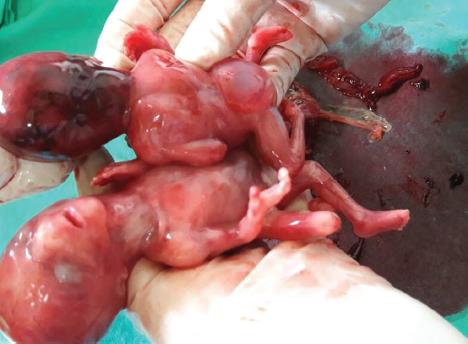 Fig. 4: Autopsy picture of the twins demonstrating the meningocele in twin B 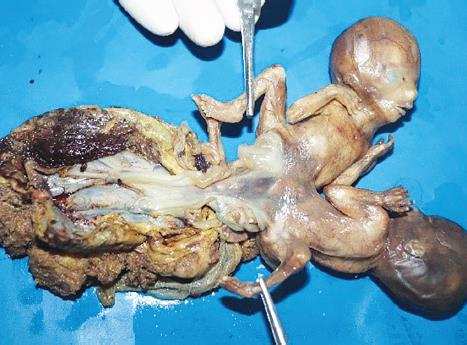 Fig. 5: Autopsy picture of the twins with the placenta

Autopsy of the fetus revealed an omphalopagus type of conjoint twins (Figs 3 to 5). The uniqueness, in this case, was that the twins were joined at the site of an omphalocele defect with two umbilical cords arising from the omphalocele sac as opposed to an umbilical cord cyst thought in the prenatal scan. The position of the twins made it difficult to diagnose the defect. Twin A sac contained intestines, whereas twin B had a large defect, with herniation of liver, stomach, and intestines. The two fetuses shared the intestines from the ileocecal region. Twin B also had a lumbosacral meningomyelocele. Twin A had unilateral agenesis of the left kidney and a cecum with a bifid appendix. Both the twins had scoliosis in the lumbar region, imperforate anus, hypoplastic external genitalia, and an ill-developed large intestine.

Conjoint twin results due to failure of formation of primitive structures of the zygote between the 13th and 15th day after fertilization. Two opposing theories the fission and the fusion theory have been proposed, though the exact etiology remains obscure. The types of conjoint twins are classified based on the site of joining and are given in Table 1.6,7

Here, we report a case of conjoint twins where early suspicion was possible due to the constant position maintained by the fetuses with each other throughout the duration of scanning. As she was a low-risk patient wherein she had just delivered one and a half years ago, with no family history of twinning, this was a surprise find. To make an accurate diagnosis, multiple scans were done and the same constant togetherness was found during each scan. We confirmed the conjoint twins and in addition found two more anomalies in twin B, in which the one we thought to be an umbilical cord cyst later turned out to be an omphalocele. This was not picked up by ultrasound. Due to the unfavorable fetal position facing each other, this major anomaly was missed/misinterpreted. But the fetal examination and autopsy gave us the diagnosis. The degree of fusion became evident with the internal examination which showed sharing of the internal abdominal organs. So, even though the ultrasound gives an accurate diagnosis, the utility of fetal autopsy becomes clear not only in reconfirming the diagnosis but also in providing additional information in case of missed major anomalies.8,9 In this case, the type of conjoint twins also was confirmed. The highlights of the case are the early diagnosis in the first visit wherein a systematic examination at the time of combined screening made the diagnosis possible. However, there have been reports of early diagnosis of conjoint twins, the earliest diagnosis documented to date was at 7+ weeks.10 The presence of a bifid fetal pole, with more than three umbilical cords, and persistence of the same position of the fetuses relative to one another may help in the suspicion of conjoint twins when there is a monochorionic twin gestation. But at this early gestation, there have been instances where it has been either missed or misdiagnosed. So, it is prudent to wait till around 11–14 weeks to repeat the scan and reconfirm the diagnosis. It will also additionally throw light on the evolution of any associated anomalies. Many studies have reported an increased nuchal translucency in these twins, which might be an indication to look for conjoint twins.11 The reason for this being the hemodynamic and vascular abnormalities seen with the thoracophagus as cardia is shared in them.12 But currently, we know that increased nuchal translucency has a lot of other important and specific associations and this might be one additional finding we might expect in conjoint twins. In this case, the nuchal translucency was normal at 1.7 and 1.8 mm, respectively. It is important to point here that the relative positions of the twins made it very difficult to get an accurate nuchal translucency in the FMF accredited NT plane. In this case, the conjoint twins were joined at the omphalocele defect with two separate umbilical cords. This anomaly might be associated with the embryological pathogenesis of conjoint twins itself. But one twin also had a meningocele which likely is unrelated to the spectrum of conjoint twins per se. Mutchinick et al. observed congenital anomalies in 115 pairs of 182 conjoint twin sets which accounted for 63.2%. In them, frequently associated malformations were genitourinary tract (19.8%), central nervous system (18.9%) of which neural tube defects comprised 9.9%, hydrocephalus (3.6%), microphthalmia (0.9%), and other central nervous system defects (4.5%). Other systems involved commonly were 20.7% limb anomalies, gastrointestinal atresia, and facial clefts 9.9%.7 So in this case, we found neural tube defects which are unusual as an omphalopagus type of conjoint twins were associated mostly with genitourinary anomalies.

The patient was not offered further testing/imaging as she opted for termination with chances of recurrence very low. A fetal autopsy was done.

Diagnosing conjoint twins is a dilemma. Once diagnosed a “ Pandora box” is opened. The trouble starts here, with classifying the type, the extent of duplication, and looking for other commonly associated anomalies. If diagnosed early termination of pregnancy can be offered. The late diagnosis makes management difficult with increased risks in preterm labor, intrauterine death, stillbirths, cesarean delivery, and problems of surgical separation.

A systematic and meticulous examination at 11–14 weeks helps in diagnosing many congenital abnormalities. In case of a diagnostic dilemma, it is always better to do a repeat survey at different periods to come to an appropriate diagnosis and counsel accordingly.