Umbilical vein varix is an uncommon vascular anomaly. The varix may be the initial presentation of an underlying congenital portosystemic shunt adversely affecting the fetus as we demonstrate in this case. To be able to label a varix as an isolated finding necessitates a thorough evaluation of the fetal venous system as well. Serial ultrasound of the fetus can help in detecting changes in the varix, thrombosis, growth restriction, as well as heart failure if there is another underlying venous anomaly. Early postnatal imaging is essential to exclude other associations to optimize the neonatal outcome. The prognosis is good if it is an isolated finding.

Fetal intra-abdominal umbilical vein varix (FIUVV) is an uncommon finding on ultrasound. The prognosis is generally good in isolated FIUVV. We present a case of FIUVV with progressive deterioration of umbilical artery Dopplers and dilatation of systemic veins followed by a postnatal revelation of an intrahepatic portosystemic shunt.

A 29-year-old G2P1L1 lady was referred at 26 weeks with a diagnosis of FIUVV. This was an unsupervised pregnancy with no prior aneuploidy screening. Gestational diabetes mellitus was detected at 27 weeks and controlled on diet. She had one healthy child aged 2 years.

On ultrasound, a dilated anechoic intra-abdominal extrahepatic cystic structure measuring 1.57 × 1.50 cm was seen just to the right of the intra-abdominal portion of umbilical vein, in continuity with it (Fig. 1). Color Doppler showed venous waveform with no turbulence. Intrahepatic measurement of the umbilical vein was 0.6 cm. Umbilical artery and ductus venosus Dopplers were normal. Fetal echocardiography revealed normal fetal cardiac anatomy with cardiothoracic ratio of 50%. No soft markers of aneuploidy were identified on ultrasound. She was referred for genetic counseling and offered amniocentesis, which was declined.

The fetal growth was found to be appropriate for gestational age and weekly scans were done to monitor for variceal changes. Two weeks later, mild tricuspid regurgitation (TR) with mildly dilated right atrium, right ventricle with a prominent brachiocephalic vein (Fig. 2A) was noted. At 31 + 4 weeks, FIUVV increased to 1.8 × 1.9 cm; a dilated inferior vena cava (IVC) and hepatic veins (Fig. 2B) were noted with turbulence in IVC besides a dilated right heart with a myocardial performance index of 0.50. Umbilical artery showed reversed end diastolic flow (REDF); ductus venosus could not be visualized at this point. There was no hydrops. After antenatal steroids, an average for gestational age, male baby weighing,1,560 g, with Apgar score 5.7, was delivered by caesarean at 31 + 6 weeks due to REDF.

Postnatal echocardiography detected a 7-mm ostium secundum atrial septal defect (ASD). Ultrasound abdomen of the neonate initially showed a dilated IVC, patent DV, with suspicion of an arteriovenous (AV) fistula between hepatic artery and portal vein. Two weeks later, a dilated left portal vein measuring ~5 mm and dilated right hepatic vein with a communication between the two with shunt fraction %3C;50% was found on ultrasound and a diagnosis of congenital intrahepatic portosystemic shunt was made. The shunt was reconfirmed on CT angiogram done at 4 weeks of life. Blood karyotype confirmed trisomy 21. Initial concerns of respiratory distress, congestive heart failure, and hyperbilirubinemia were managed and baby was discharged after 5 weeks with a plan for conservative management awaiting spontaneous closure of the shunt. Currently, the baby is 3 months old and under follow-up. 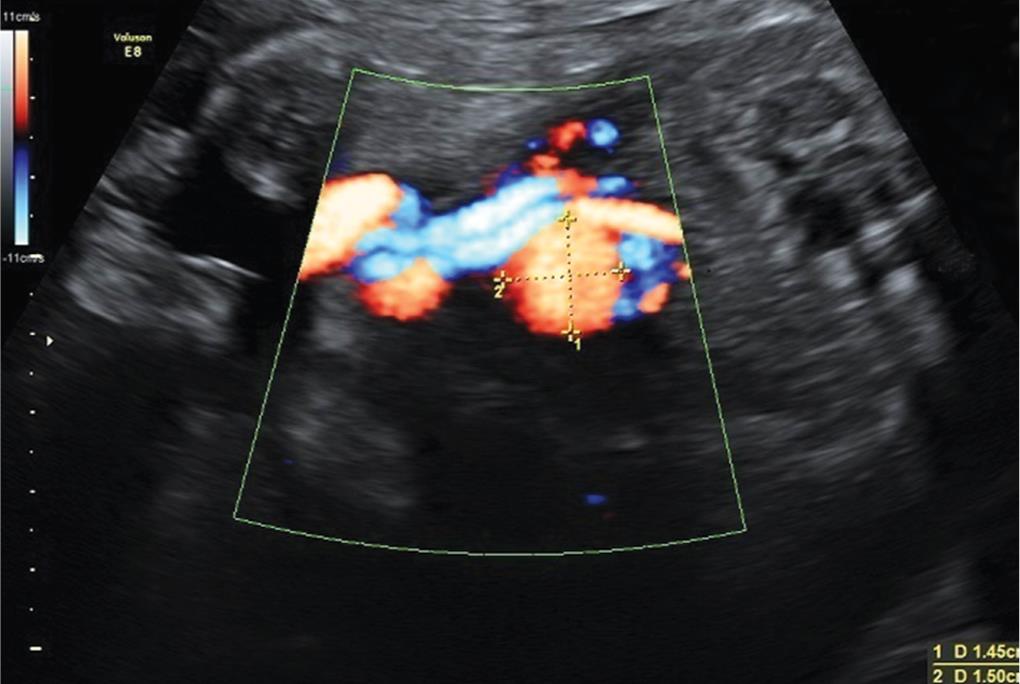 Beraud et al. in his review concluded that the three complications likely to occur with FIUVV are fetal demise, growth restriction, and variceal thrombosis with an overall frequency of 10%, necessitating fetal surveillance. Fetal intra-abdominal umbilical vein varix may be associated with other anomalies in about 29–35% of cases; a detailed fetal anomaly scan and echocardiography are pertinent.3–5 Chromosomal abnormalities have been found in 6% of cases of FIUVV, commonly trisomy 21, 18, and triploidy.3,6 Bas-Lando in his series of 24 patients with isolated FIUVV did not report any chromosomal anomaly.2 In this case, the fetus was under weekly ultrasound surveillance from 26 weeks. The increase in FIUVV size, dilated IVC, and right heart were suggestive of increased preload. Increase in size of FIUVV has been reported in about 28% cases.4,5 This evolution of the changes in the vascular system of the fetus in retrospect could be attributed to the intrahepatic congenital porto-systemic shunt (CPSS), which was diagnosed postnatally. The CPSS may have led to the initial presentation as FIUVV, which could later progress to right heart failure.

Congenital portosystemic shunts are very rare vascular anomalies; only 10% are diagnosed prenatally. There are primarily two types of CPSS: extrahepatic and intrahepatic. Extrahepatic CPSS are more commonly associated with multiple anomalies, especially cardiovascular, than the intrahepatic CPSS, which may be associated with chromosomal anomalies as in this case.7 These abnormalities of the fetal venous circulation could interfere with liver perfusion leading to fetal growth restriction8 and neonatal problems as hyperbilirubinemia, elevated ammonia levels, galactosemia, and heart failure. These shunts are unlikely to cause symptoms if the shunt ratio is <30% and are expected to close spontaneously in most cases by 1–2 years of age; otherwise, they need surgical intervention to prevent long-term complications as portopulmonary hypertension, hepatic tumors, endocrine dysfunction, and neurological deterioration.7,9

Through this case, the lessons highlighted are:

Though this is not a case series, it highlights the need to collect more data on the possibility of prenatal diagnosis of the coexistence of CPSS and FIUVV.

This article does not contain any studies with human participants or animals performed by any of the authors.