Role of Hysterolaparoscopy in Infertility

Materials and methods: Women posted for hysterolaparoscopy for infertility workup in JSS hospital during the period from November 01, 2014, to October 31, 2016, were included in the study. First hysteroscopy was performed. In hysteroscopy, endocervical canal was visualized for any growth or polyps. Diagnostic laparoscopy was performed using a 30-degree deflection angle telescope powered with a fiber-optic cable for light source.

Conclusion: Hysterolaparoscopy is an effective and safe tool in comprehensive evaluation of infertility to diagnose and treat the various pathological conditions in a single sitting.

Infertility affects about 10–15% of reproductive-age couples. Although the prevalence of infertility is believed to have remained relatively stable during past 40 years, the demand for evaluation and infertility treatment has increased.1,2

Majority of pelvic pathology is frequently not well appreciated by routine pelvic examinations and the usual diagnostic procedures. Hysterolaparoscopy becomes the “third eye” of the gynecologist in diagnosis of infertility. Laparoscopy and hysteroscopy can be used for both diagnostic and operative purposes.

Laparoscopy is considered the gold standard for diagnosing tubal and peritoneal disease. It has got an advantage of direct visualization of the pelvic organs and the peritubal status, which provides greater information when compared to hysterosalpingography and ultrasonography.

Hysteroscopy has become the gold standard for diagnosis of intrauterine abnormalities. Small intrauterine lesions such as adhesions, polyps, or submucous myomas are diagnosed much more precisely by hysteroscopy.

The question of tubal morphology and patency, ovarian morphology, an unsuspected pelvic pathology, and uterine cavity abnormalities can all be resolved with accuracy at one session. Additionally, therapeutic procedures can also be done in the same sitting.

Hence, hysterolaparoscopy is an effective and safe tool in comprehensive evaluation of infertility to diagnose and treat the lesions of pelvis in the same time.2

This cross-sectional study was done for a period of 2 years in Department of Obstetrics and Gynecology, JSS Medical College, Mysuru, from October 2014 to August 2016.

Women with primary or secondary infertility admitted in JSS hospital for hysterolaparoscopy.

Prior to commencement of the study, ethical clearance was obtained from Human Ethics Committee. A total of 90 women aged between 18 years and 40 years with primary or secondary infertility willing for the infertility workup were included in study. A detailed medical history was taken in all cases. This was followed by a detailed medical examination and relevant examination of the husband. Patients satisfying the selection criteria were informed in detail about the nature of study, and a written informed consent was obtained prior to procedure. After admission, demographic data such as age, religion, education, and socioeconomic status were obtained. A detailed history and clinical examination was done. The scheduled investigations were done to determine fitness for surgery. Patient was admitted one day prior to the procedure, and preanesthetic checkup was done. Hysterolaparoscopy was scheduled in preovulatory period between day 5 and day 10 of cycle for infertility evaluation after informed consent (Figs 1 and 2).

Hysterolaparoscopy was done under general anesthesia. First hysteroscopy was performed. In hysteroscopy, endocervical canal was visualized for any growth or polyps. Uterine cavity was examined for the presence of septum, any congenital malformation, fibrotic bands, polyps, myomas, endometrial appearance, thickness, and color. Both the tubal ostia were visualized.

Diagnostic laparoscopy was performed using a 30-degree deflection angle telescope powered with a fiber-optic cable for light source. Panoramic view of the abdomen was obtained. Stepwise evaluation was made in the following manner:

To start with a general assessment of peritoneal cavity, especially the lower part of abdomen and pelvis was made to note any obvious pathology in the form of adhesions, endometriosis, or any gross deviations from the normal appearance.

Uterus, tubes and ovaries: The size and shape of the uterus was recorded. Any apparent congenital malformations such as arcuate uterus, bicornuate uterus, or rudimentary uterine horn were looked for and recorded. If any adhesions existed between the uterus, adnexae, omentum etc., they were recorded. Tubes were identified by tracing them from cornual end to fimbrial end. Apparent tortuosity of the tubes, any pathology affecting or involving the tubes was looked for and recorded. In cases where anatomy was distorted, round ligament was visualized first and tubes were traced. With respect to ovaries, size, shape, surface, color, presence of cysts and relation with tubes was noted.

Pelvic peritoneum including pouch of Douglas: Any pathology in the form of endometriosis, pelvic inflammation, and presence of fluid was recorded when seen.

Laparoscopic chromopertubation was performed for testing tubal patency in which methylene blue dye was injected with a 20-ml syringe via Leech Wilkinson cannula intracervically, and spillage of dye from the fimbrial end of tube was visualized.

Laparoscopic findings of uterus in 90 cases for infertility findings were as follows: 74 (78.%) of them had normal findings, 12 (13.3%) of them had fibroid uterus, and 1 (1.1%) each had unicornuate uterus and hypoplastic uterus (Table 3).

Seventy-four (60%) of them had normal fallopian tubes. Pathological findings included peritubal adhesions, hydrosalphinx, tortuousity, stretching and kinking of tubes, tubo-ovarian mass, hematosalphinx, and absent tubes. One of the tubes could not be visualized due to adhesions in 4 cases (Table 5).

Laparoscopic findings of ovaries are depicted in Table 6. Polycystic ovaries were seen in 30% of cases, and endometriotic cyst was noted in 11 cases. Ovaries could not be visualized due to adhesions in four cases.

Figs 1A to C: Hysteroscopy images 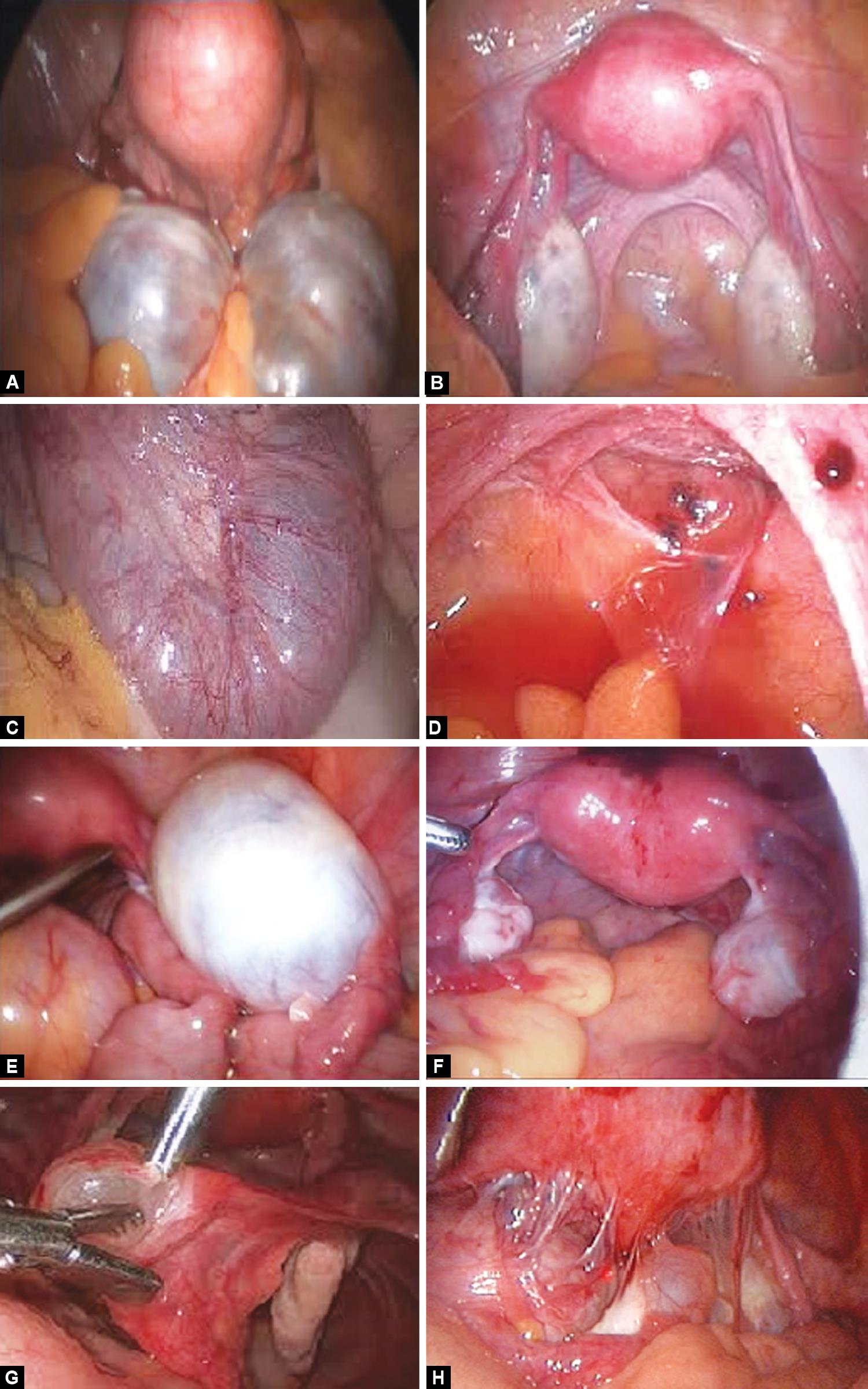 Figs 2A to H: Laparoscopy images

The present study was a cross-sectional study done for period of 2 years in Department of Obstetrics and Gynecology, JSS Medical College, Mysuru, from October 2014 to August 2016. In our study, out of 90 subjects, 66 (73.3%) were primary infertility and 24 (26.7%) were secondary infertility which is comparable to study by AM Elbareg et al.3

The second most common hysteroscopic uterine cavity abnormality in our study was septate uterus which was similar to study by Nayak et al.,5 where septate uterus was found at higher incidence of 10% in their study (Tables 7 to 9).

It has been associated with increased miscarriage rates, but there is no evidence of lower pregnancy rates.3

In our study, polypectomy was done in 5.55% cases which are comparable to study by Keya Vaid et al.6

In our study, laparoscopic findings of uterus were as follows: 74 (78.9%) of them had normal study, 12 (13.3%) of them had fibroid uterus, 5 (20.8%) had septate uterus, 1 (1.1%) each had unicornuate uterus and hypoplastic uterus. Mullerian anomalies were comparatively more in our study when compared to Suman et al. which had 4% congenital anomalies.

Our study revealed myomas in 13.3 % patients on laparoscopy and 1.1% on hysteroscopy which is comparable to study by Zhan et al.4 which revealed myomas in 15%. Also in a review by Pritts et al.,9they found that fibroids causing intracavitary distortion result in decreased pregnancy rates.4,9

In our study, 60% of the cases had normal fallopian tubes, and most common pathological finding was hydrosalphinx seen in 5%, compared to Keya vaid et al.6 Hydrosalphinx was observed in 2.59%; however, most common pathology in their study were fimbrial cyst 9.84%. Other pathology in tubes found in our study were as follows: 6 (13.6%) had peritubal adhesions, 2 (5%) had tortuous, stretched, and kinking tubes and 1 each (2.5%) had tubo-ovarian mass, hematosalphinx, absent tubes, and tube could not be visualized in 1 case (2.5%).6

In the study done by Shobha Dhananjay et al.,10 PCOS was the commonest finding noted in 18.99% similar to our study. The other more commonly seen pathology in ovary in our study was endometriomas with incidence of 12.6%.

The surgical removal of endometriotic implants in minimal–mild severity endometriosis was shown to improve fertility in two randomized controlled studies. Thus, all patients with endometriosis should have all visible implants excised during laparoscopic diagnosis. According to Adamson, in the more severe stages of endometriosis, a surgical approach that normalizes pelvic anatomic distortion and provides adhesiolysis can enhance fertility11,12

In our study, endometriosis was seen in total of 27 cases which were subclassified according to ASRM criteria, and fulguration of endometriotic spots was performed in 4 (4.4%).6 Endometrioma resection was done in 12.2%.

Based on results of this study it be concluded that hysterolaparoscopy is an effective and safe tool in comprehensive evaluation of infertility to diagnose and treat the various pathological conditions in the same time. Hence, it is an essential tool for the diagnosis, treatment, and prognosis, as it allows the gynecologist to develop the plan of management for infertile women.