Ovarian hyperstimulation syndrome (OHSS) is a potential iatrogenic life-threatening situation. It is difficult to decipher OHSS pathophysiology.1 The occurrence is directly proportional to estradiol in blood, follicle number, and human chorionic gonadotropin (hCG) with more chances of happening in polycystic ovarian disease. Complete prevention of OHSS is never possible, but endocrine profile and ultrasonographic follicular monitoring are the mainstay of its prediction. Complications such as hemoconcentration, hypovolemia, and thromboembolism can occur. Withholding hCG, continuation of gonadotropin-releasing hormone analogs, coasting, agonist trigger, intravenous albumin, dopamine agonists, and cryopreservation of embryos are cornerstones of OHSS prevention.2 Mild OHSS usually requires no active therapy. Moderate and severe cases have to be treated. Surgery may be needed in ruptured ovarian cysts, torsion, or concomitant ectopic pregnancy. Transvaginal paracentesis is recommended in cases of severe ascites. Inpatient management is typically based on preventing complications such as derangement of kidney and liver functions, thrombosis, and severe respiratory depression. Recent ART treatment protocols behold more patient-friendly mild ovarian stimulation regimes that are individualized depending on patient’s ovarian reserve.3

Controlled ovarian stimulation according to the International Society for Mild Approaches in Assisted Reproduction (ISMAAR) classification is based on producing multiple ovarian follicle (>−8) in an already ovulating women. It is a hallmark in any assisted reproduction cycle in desire to increase number of oocytes for fertilization and development of embryo. Ovarian hyperstimulation syndrome (OHSS) is an iatrogenic complication of supraphysiologic ovarian stimulation.4 It is almost exclusively associated with exogenous gonadotropin stimulation and rarely associated with clomiphene citrate stimulation or spontaneous ovulation.5 Prevalence of severe Ovarian hyperstimulation syndrome is 1.4% of all cycles.6 Mortality risk is evaluated as around one in approximately four to five lakh cases. OHSS is an amplified reaction to ovarian stimulation pertaining to intravascular protein-rich fluid shift to third space. Clinicians prescribing different protocols for ovarian stimulation should be well versed with their pharmacokinetics and have complete knowledge about selecting protocol for particular patient. Once at risk, clinician should be able to prevent it, treat it, and manage it properly. Aim should be to identify women at risk and apply preventive strategies. Most OHSS is mild and of little clinical concern. Severe OHSS can lead to significant morbidity and mortality. Reported incidence of moderate variety of OHSS is 3–6%, while severe is 0.1–2%. The mild form occurs in about 20–33% of IVF cycles.7 Finnish registry in 2005 concluded incidence of severe OHSS of 1.4% per cycle.

Prevention of OHSS sets its first milestone by tailoring stimulation protocol of a particular patient according to their own risk profile, i.e., individualized controlled ovarian stimulation. Benefits and risks associated with each strategy are different for each cohort of people due to heterogeneous profiles of patients. Selecting best preventive approach is challenging.Way of completely preventing it is still a dilemma. There are some avenues and stones that can be thrown to reduce its incidence and severity.

Ovarian hyperstimulation syndrome is a systemic complication arising due to activation of vasoactive substances that are let out of hyperstimulated ovaries. Capillary permeability expels fluid rich in protein into third space resulting in hemoconcentration. Hypercoagulability and reduced end-organ perfusion emanates.8 Human chorionic gonadotropin (hCG) is considered to be the critical element in mediating this syndrome.9 Role of hCG is found in two different but significant clinical presentations of OHSS: Early and late.10

“Early” OHSS happens within 1 week of hCG trigger representing exogenous hCG effect on ovaries hyperstimulated by gonadotropins. “Late” OHSS generally occurs approximately 10 days after use of hCG trigger. It is due to endogenous hCG production by trophoblast and not the exogenous hCG administration. hCG has a very important role in pathophysiology of OHSS with VEGF-A as the primary mediator interacting with VEGF receptor-2 causing increase in vascular permeability (Fig. 1). VEGF-A concentration is elevated in women at risk of OHSS.11 Human chorionic gonadotropin stimulates granulosa-lutein cells leading to the increased production of growth factor mRNA which binds to cell membranes by its receptors. Downstream signaling augments vascular permeability.12 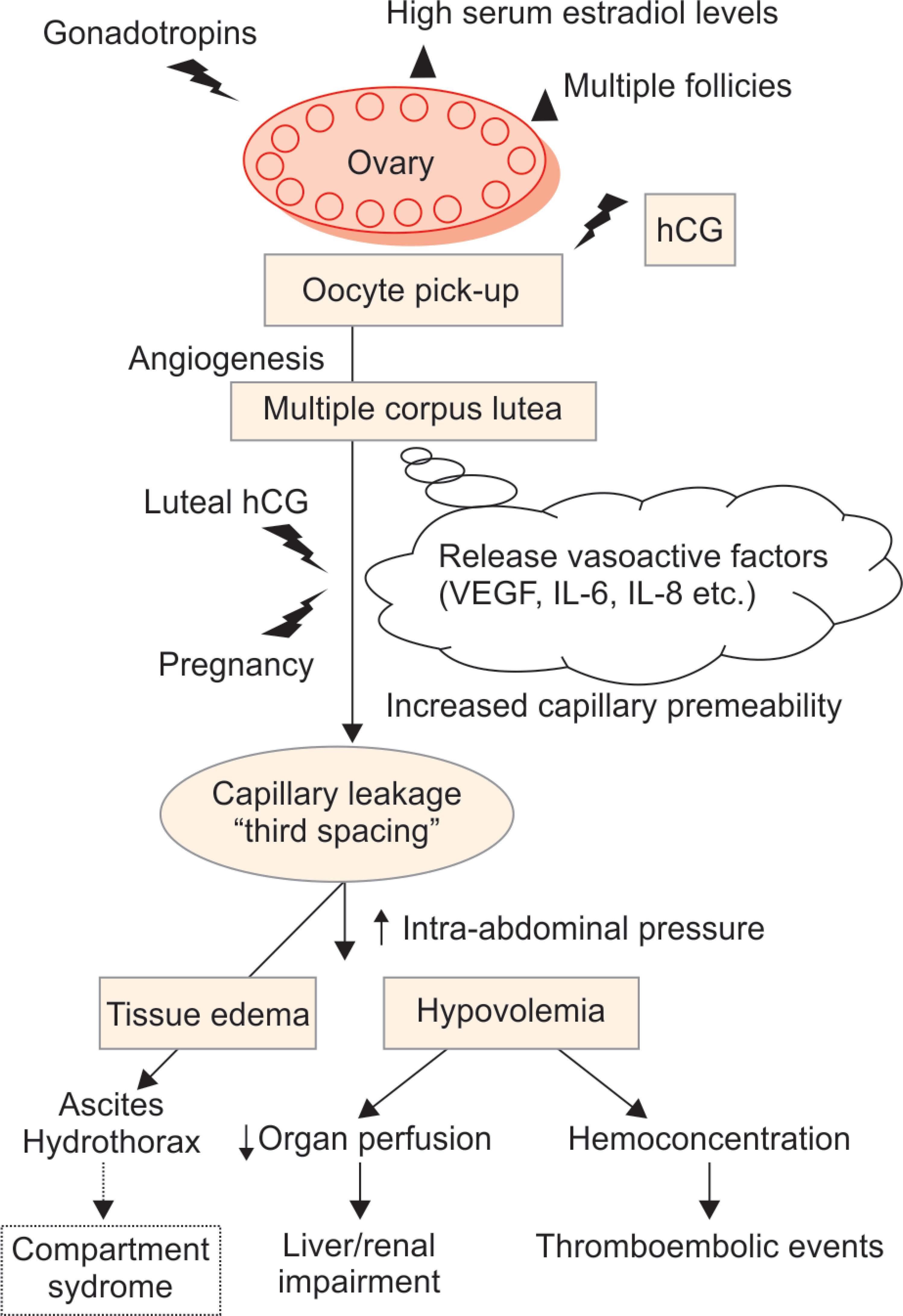 Numerous mediators such as angiotensin II, insulin-like growth factor 1, and interleukin-6 are implicated in the process.13 Other mechanisms possible for OHSS development are FSH receptor variability as assessed by De Leener et al.

Awareness of risk factors is important for clinicians to predict and preempt occurrence of OHSS to reduce its incidence as a complication of controlled ovarian stimulation.

The clinical symptoms and signs of OHSS occur in a continuity and to classify them or categorize into stages according to severity is literally a challenge. There are many different classification systems proposed for OHSS. RCOG (2006) have classified OHSS into mild, moderate, severe, and critical subtype (Table 1). Mild OHSS has abdominal bloating and pain.17 Severe OHSS has rapid weight gain, clinical ascites, oliguria, hematocrit >45%, respiratory difficulty, hypoproteinemia, hyperkalemia, and creatinine >1.2 mg/dL. Critical OHSS is identified with more severe signs with tense ascites and anuria.

Each and every organ system is affected. Pleural effusion, paralytic ileus, and ARDS may occur.18,19 Cardiovascular system also deteriorates. Coagulation abnormalities include hemo-concentration, hypercoagulability, and venous thrombosis.20 Renal system findings include decreased renal perfusion with subsequent oliguria or renal failure. Severe cases may present with fever; although its etiology is not clear, it may be due to cytokines and prostaglandins released into circulation.21,22

“Prevention is the Daughter of Intelligence”

Prevention strategies for OHSS can be studied as primary and secondary. Primary prevention is based on assessment of a patient’s profile and identifying risk factors and working on them. Secondary prevention helps in early diagnosis and intervention.23 Deterrence and early detection of OHSS are the most important strategies for the patient’s safety. ART centers should tie up with emergency units and hospitals so that appropriate and proper care can be provided.24 Young, thin women with polycystic ovaries on ultrasound (>12 antral follicles in each ovary) are at higher risk for OHSS, and thus lower starting dose of gonadotropin should be used.25 Careful monitoring is prudent and robust monitoring is required to detect early hyperresponse and thus taper the dose.

Women identified with risk factors should have modified treatment according to their history and clinical profile so as to curtail an overexcessive response.

Using GnRH antagonist protocols enable the clinician to use agonist as trigger for final oocyte maturation. GnRH agonist trigger displaces the GnRH antagonist from its receptor to induce a controlled surge of endogenous LH and FSH. This GnRH agonist-induced LH has a shorter half-life than exogenous hCG, resulting in a less sustained luteotrophic stimulation and hence a lower risk for OHSS especially early OHSS. More aggressive LPS protocol has to be used with agonist trigger to achieve high IVF success rates.35

Diagnosis of OHSS is clinical. There will be preceding history of stimulation in most of cases, but absence of it does not rule out OHSS. Therefore, conditions simulating it should be ruled out. Treatment of the acute phase merely relies on an empirical and symptomatic approach. More adequate methods would require better understanding of the underlying pathophysiological mechanisms to promote an etiological therapeutic approach.

Outpatient management is appropriate for mild, moderate, and few selected severe OHSS cases. Patients have to be properly counseled and informed about oral fluid intake and urine output tabulation. If urine output is less than 1000 mL in 1 day, then it should be reported to medical facility for prompt action and care. Intravenous hydration should always be initiated with a crystalloid solution to prevent hemoconcentration and provide proper sufficient end-organ perfusion and strict charting to be done (Table 2). If not maintained, then colloid should be given.36

Oliguria despite adequate fluid replacement responds to paracentesis in few cases. Multidisciplinary monitoring should be done. Diuretics should not be used without correcting dehydration as it worsens hypovolemia.

Indications for paracentesis include the following: severe abdominal distension, shortness of breath due to ascites, and increased intra-abdominal pressure and failed volume replacement causing oliguria. Paracentesis should be reserved for patients not responding to conservative management because there is a negligible risk of injury to hypervascularized organs. It has been suggested that early drainage of ascites to lower the intra-abdominal pressure in patients withholds disease progression and stops worsening of condition.37

Women with severe OHSS should receive thromboprophylaxis with LMWH anti-embolism stockings. Individualized duration is suggested. Thrombosis can occur in 0.7–10% cases of OHSS. Clinical hematologist should look into such cases. Most patients have recovery after thrombosis, although neurological deficits may occur.

C-reactive protein levels may correlate with severity of OHSS. Analgesia and anti-emetics can be used on and off according to symptoms. Avoid NSAIDs and drugs that are contraindicated in pregnancy.

Observational studies suggest that GnRH antagonist administration may also help in severe early cases although there is insufficient evidence.

We as clinicians have ethical and medical duty of being vigilant for signs of OHSS and its severity. More frequent assessment is required in cases of severe and critical OHSS. Ovarian hyperstimulation syndrome is self-limiting in majority of women. Monitoring is useful in identifying severity of it and what all measures are required further.

Patients with severe and critical OHSS must be provided with invasive hemodynamic monitoring.38 Specific complications such as thromboembolism, ARDS, and renal failure require specialized multidisciplinary approach.

This is necessary in extreme cases of complications that arise as a consequence of OHSS. Rarely, pregnancy termination has been reported in progressive thrombosis cases, despite anticoagulation. Intractable OHSS has resulted in bilateral oophorectomy.39 Surgery when indicated should be performed by an experienced surgeon.40

Compromised obstetric outcome has been reported by many authors. This is due to altered progesterone/estradiol ratios and impaired endometrial receptivity. Some cytokine gene polymorphisms have been associated with increased chances of preeclampsia, miscarriages, and placental insufficiency. Antenatal complications such as hypertension, diabetes, and abruptio placenta are common. Incidence of fetal malformations is not elevated.

Infections are often iatrogenic due to catheterization, pleural puncture, paracentesis, and other surgical procedures. These are nosocomial infections involving bacteria such as Pseudomonas, Proteus, Klebsiella, and Enterobacter. Thus, hospitalization should be minimum and ambulation should be favored.

Couple should be properly counseled about the condition and that management is ultimately supportive only and condition will resolve on its own spontaneously. Consent both verbal and written should be taken before start of any ART procedure. Natural history of OHSS and all other complications should be made understandable to the patient in a language known to her. Couple should be well versed and informed about the admission in the hospital and all its consequences. Meanwhile, reassurance is also necessary.

OHSS is a rare iatrogenic complication; nevertheless, it may be of severe variety leading to significant morbidity. Ovarian hyperstimulation syndrome is a complication of fertility treatment, which uses pharmacological ovarian stimulation to increase the number of oocytes and therefore embryos available during ART.

Ovarian hyperstimulation syndrome is associated with significant physical and psychosocial morbidity and mortality. Most cases are self-limiting and require supportive management for resolution to be complete. Women with severe OHSS may need hospital admission to reduce chances of complications. Early detection and care are the key fundamentals in moderate and severe OHSS cases.

Data are not up to date and limited till now causing difficulty to prioritize superiority of one method over other method. Continued research is needed for understanding the pathophysiology of OHSS.

Based on recent data, one can hypothesize that ovarian stimulation protocols should be individualized, and already proven approaches combined together should be the target. These can be use of metformin, GnRH-antagonists, low-dose gonadotropins with Letrozole co-treatment, agonist trigger, and “freeze all” with frozen embryo transfer, dopamine antagonists, and/or GnRH-ant in luteal phase. These might be more beneficial when dealt with all together or in combination.41 Outcome and effectiveness of such combined approach is yet to be proven through large-scale randomized controlled trials.

4. Royal College of Obstetricians and Gynaecologists:RCOG Green-top Guideline No. 5.