Congenital pulmonary airway malformation is the second most common developmental lung abnormality, first being the lung hypoplasia–agenesis complex.1 It is considered as a part of a spectrum of congenital lung malformations. Previously, it was referred as congenital cystic adenomatous malformations (CCAM). It can be diagnosed as early as 15 weeks of gestation by high-resolution ultrasound, but is commonly diagnosed at 18 to 21 weeks during targeted scan. We describe here a case of CCAM type II diagnosed at 23 weeks of pregnancy with a brief review of the literature due to rarity of the presentation.

A 27-year-old, gravida 2, para 1 reported at 23 weeks for routine antenatal care. She had uncomplicated previous delivery. Dating of pregnancy was done at 16 weeks, and suggested no gross abnormality. Her first scan at our hospital revealed predominantly hyperechoic (solid) lesion measuring 4.3 × 2.0 × 1.7 cm in the left lung. The lesion had multiple thin wall cysts of 0.5 to 1 cm. and right-sided mediastinal shift was a prominent feature (Fig. 1A). Fetal anatomic survey at that time did not reveal any other structural anomaly. Fetal echocardiogram at 24 weeks suggested no complex heart disease. Diagnosis of isolated CCAM type II was made. Her routine antenatal investigations were normal. Fetal surveillance with serial ultrasound showed a marginal increase in the size of the lesion (4.4 × 2.0 × 3.0 cm) at 27 weeks. Subsequent scans showed size of the lesion to be static. She developed polyhydramnios (amniotic fluid index 25.2 cm) and features of pericardial effusion at 27 weeks, which were resolved spontaneously over a period of 3 to 4 weeks. Steroid prophylaxis was given at 33 weeks for threatened preterm labor. Fetal growth parameters were between 50 and 75 percentiles throughout the pregnancy, suggesting adequate fetal growth. At 39 weeks, she delivered a 3.3 kg neonate. The Apgar score was normal.

There was mild respiratory distress in the immediate neonatal period. The neonatal X-ray showed a mediastinal shift and haziness of right lung (Fig. 1B). The echocardiogram suggested situs solitus levocardia, mild pulmonary hypertension, and tricuspid regurgitation. The computed tomography (CT) scan confirmed CPAM type II measuring 4.3 × 2.05 × 3.06 cm in left lower lobe with multiple cysts measuring 8 to 9 mm, and normal interspersed lung tissues (Fig. 2). As the neonate was asymptomatic, the parents opted for conservative management with serial follow-up, and the neonate was discharged on 4th day of life. Now, the infant is 10 months and still asymptomatic. Our aim is to share our experience of ultrasound and CT scan findings and management of this rare case. 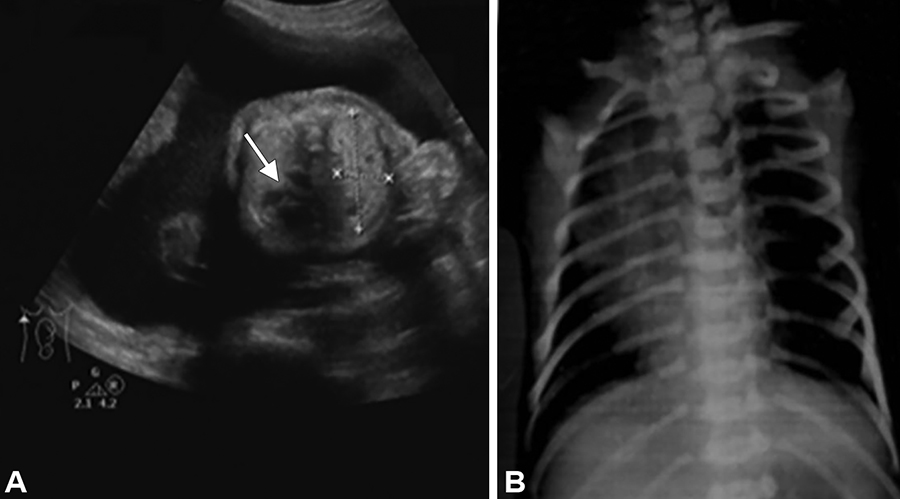 The CPAM was traditionally described as CCAM; but, as the cystic changes are not universal, CPAM is the recommended term. The estimated prevalence varies between 1 in 25,000 to 35,000 pregnancies.2 It is characterized by immature and malformed lung tissue with cystic appearance. The CCAM was originally classified into the three subtypes by Stocker, and reclassified into five subtypes in the year 2002, when the term CPAM was coined.3,4 Another classification system in academic use is described by Langston,5 but Stocker's classification is used widely. Table 1 shows similarities and differences of the classifications described by Stocker and Langston. Types I, II, and 3 are similar for CCAM and CPAM.

The origin of CPAM has been proposed between 7 and 24 weeks of gestation, i.e., in the pseudoglandular and canalicular phases of lung development.6 The cause of CPAM is unknown. Among the several hypotheses, airway obstruction is considered as a strong causative event for CPAM. It suggests disruption of tracheobronchial connection, but preserved pulmonary blood supply to the lung lesion. Increased proliferation and decreased apoptosis in resected lung lesions suggest that abnormality in airway branching morphogenesis is a cause.7 The HOXB5 (Homeobox B5) and glial cell-derived neurotrophic factor7 mutations have been implicated in the etiology.

The CPAM/CCAM type II is usually diagnosed during anomaly scan; lesion is seen as a hyperechoic, multicystic lung lesion. The individual cyst size varies from 0.5 to 2 cm. Here, we restrict our discussion to subtype 2. It is seen usually in a single lobe of the lung; bilobar, multilobar, or segmental involvement is rare. Natural history of CPAM suggests rapid growth in the second trimester and static growth in the third trimester. Occasional mass regression of the lung lesion (15%) has been documented.8 Small CPAM usually remains asymptomatic in utero and during postnatal life. Large CPAM can result in physiological consequences like mediastinal shift (mass effect), hydrops fetalis (inferior vena cava and cardiac compression), polyhydramnios (esophageal compression and overproduction of fluid by lesion), diaphragm flattening, and lung hypoplasia.9 Our patient had marginal increase in the size of lesion, transient polyhydramnios, and pericardial effusion in late second trimester, and the mass effect got autocorrected early in the third trimester. Regression of hydrops has been mentioned in the literature.10 Maternal administration of a single course of antenatal steroids in microcystic CPAM has been shown effective for smooth neonatal respiratory transition and survival.11 We administered steroids in view of threatened preterm labor.

Table 1: Classification and characteristic features of macroscopic and microscopic CPAM

Prenatal management includes serial imaging, steroids, and surgical intervention. The prognostic tool developed in the year 2002 was CCAM volume ratio (CVR) calculated from the size of the lesion and head circumference (HC) [(length × width × height × 0.52)/HC].13 Our fetus showed a decrease in CVR, from 1.1 at 23 weeks to 0.8 at 36 weeks. A CVR of 1.6 or more has up to 80% risk of subsequent development of hydrops fetalis. Except for maternal steroids, no other intervention was needed until the onset of the spontaneous labor. Other management modalities are open fetal resection in <32 weeks gestation or ex utero intrapartum therapy, and resection in >32 weeks of gestation, in selected cases.9 Laser and ultrasound-guided sclerotherapy are other recent advances in surgical management in severe CCAM types II and III.

Evaluation of neonates includes X-ray chest, ultrasound abdomen, echocardiography, and CT scan of thorax. The CT scan is essential for the precise information of lung lesion along with systemic blood supply. The X-ray chest is an important diagnostic tool to define pulmonary lesion and mediastinal shift, and to plan follow-up. Symptomatic lesion can present with intractable respiratory distress, respiratory failure, pneumonia, and rarely with pulmonary hypertension, pneumothorax, hemothorax, hemoptysis, and malignancy.14 Treatment is thoracoscopic or open resection of the mass.15 In this neonate, postnatal ultrasound done to rule out other major anomalies was normal, but the newborn had features of persistent pulmonary hypertension secondary to the intrathoracic lesion and tricuspid regurgitation on echocardiogram. Mild respiratory distress was managed conservatively. The challenge with expectant management is long-term monitoring. Operative management has been advocated in asymptomatic infants during the first year due to higher risk of lifetime complications. There is a potential for compensatory lung growth and restoration of lung volume following surgery. Literature supports both types of management, as data on long-term respiratory function in lobectomy group are unavailable.

The CPAM is a rare congenital abnormality with diagnostic and management challenges. Careful attention to prenatal ultrasound, postnatal radiography, and CT scan are essential for the definitive diagnosis. The static lung lesions should be monitored by serial ultrasound until delivery. An expectant management and/or early resection in the first year of life are the treatment options in asymptomatic infants. Early resection removes the chances of recurrent infections and the remote possibility of malignancy thus, allowing compensatory lung growth in the initial few years of life. However, in the dearth of long-term follow-up data of operated asymptomatic lesions, expectant management is also the preferred modality.