The main goal of IVF procedure is delivering a single healthy newborn. It is estimated that over five million children have been conceived in vitro. Embryo selection for transfer becomes a crucial decision when few numbers of oocytes are retrieved and day 3 transfer become mandatory to ensure liveliness of embryo while transferred. However, the traditionally used method of morphologically evaluation of embryo is not predictive enough to allow routine single embryo transfer (ET).

The TL imaging/monitoring provides a noninvasive tool for embryo culture and provides extra information on the cleavage pattern, morphologic changes, and embryo development dynamics which can help in identification of embryos with higher implantation potential.

Furthermore, studies in past concluded that transfer of cleavage-stage embryos gives higher cumulative clinical pregnancy rate than blastocyst transfer.1 Many IVF laboratories prefer to transfer cleavage stage embryo(s) due to suspected negative effect of prolonged culture. Also, it remains the only choice when low numbers of embryos are available to avoid cancellation of transfer.

Many studies recommended that each laboratory needs to first characterize optimal growth patterns for embryos within their own in vitro culture system used for TL technology as contradictory conclusions were reached in relationship between culture media and embryo kinetics.2,3

Furthermore, cryopreservation of sperm became routine procedure in IVF setup as prophylactic measure for fertility preservation due to higher age, before chemotherapy or radiotherapy. The other reasons could be preservation of sperm when husband's absence is expected at a time of IVF cycle or just as backup sample. However, the impact of use of cryopreserved sperm on events of embryogenesis is still an area of extensive research.

The present retrospective study was undertaken to fulfill following objectives in our own IVF setting: (1) To evaluate the morphokinetic differences between embryos with and without implantation potential which were transferred at cleavage stage in single ET cycle, (2) to evaluate effect of sperm cryopreservation on embryogenesis events.

This was a retrospective study of prospectively acquired data of TL imaging of human embryos during in vitro growth. This study was conducted in a private IVF clinic from August 2013 to April 2016. Total 142 single-ET cycles on day 3 with self-egg and without surrogacy were included in this study. Only those embryos which were showing normal conventional day 3 morphology with less than 5% fragmentation were selected for inclusion in this study. In vitro fertilization/ICSI cycles which were of couples with normal endometrium and uterus along with normal semen parameters were included in this study.

Conditions for Embryo Culture and Incubation

Each of the 12 individual wells of the EmbryoSlide® culture disk was filled with 25 μL of a single-step culture medium (Continuous Single Culture; Irvine Scientific, California, USA) and covered with an overlay of 1.5 mL paraffin oil (Irvine Scientific, California, USA). Following ICSI, injected oocytes positioned in the wells of the slide were placed in a TL incubator (EmbryoScope™; Unisense Fertilitech, Aarhus, Denmark) and incubated at 6% CO2, 5% O2, and 37°C for 5 days until ET. The culture medium was refreshed on the afternoon of day 3 by replacing the incubated slide with a new preequilibrated slide prepared as described earlier. Image stacks were acquired at seven focal planes every 10 minutes and data were continuously transferred to an external computer (EmbryoViewer® workstation; Unisense Fertilitech, Aarhus, Denmark).

Embryo Transfer and Confirmation of Implantation

All ET procedures were performed using a stipulated standardized technique under ultrasound guidance. Viable implantation was confirmed at 7 weeks of pregnancy by the detection of fetal heartbeat under ultrasound.

All data were recorded retrospectively from the EmbryoViewer® workstation and exported for further analysis into Microsoft Excel and then to Statistical Package for the Social Sciences (SPSS, version 17). Spreadsheet analysis was performed for the cleavage timings from t2 to t8, six cleavage cycle intervals (t3–t2; t4–t3; t5–t4; t5–t3; t8–t5; t8–t2) and for four ratios derived from morphokinetic parameters: CS2–8, CS4–8, CS2–4, deoxyribonucleic acid replication time ratio (DR) as described elsewhere.4 The time of all mitotic events was expressed as hours post-ICSI. Annotations of all embryos included in the present study were performed by one embryologist, to minimize the interobserver variations.

Table 1: Morphokinetic analysis of embryos with and without implantation potential developed by ICSI using fresh sperm 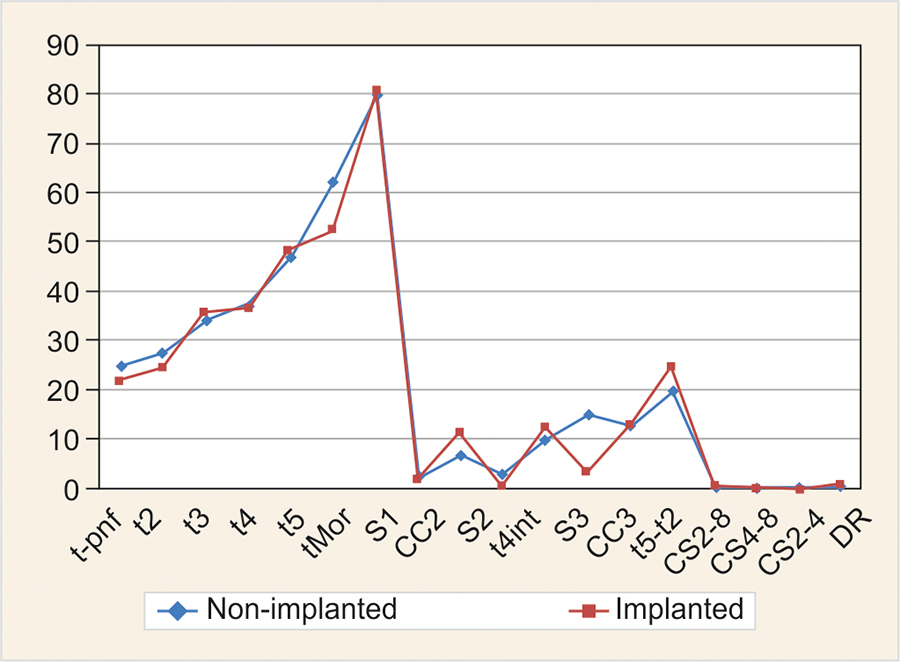 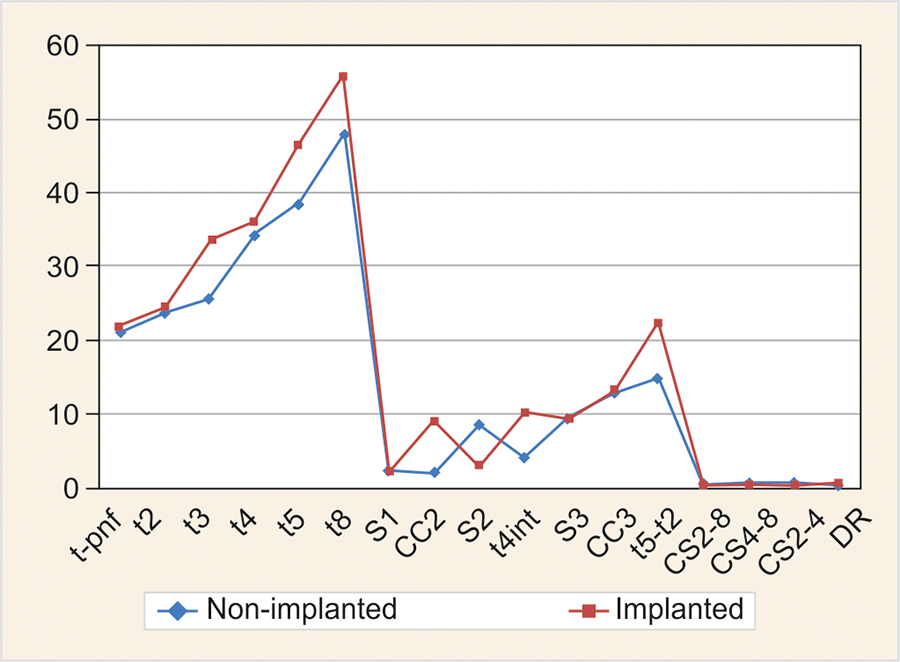 Table 2: Morphokinetic analysis of embryos with and without implantation potential developed by ICSI using frozen sperm

The results reveal that CC2, S2, and CS2–4 are the parameters which differ between the embryos with and without implantation potential irrespective of fertilization by fresh or cryopreserved sperm.

Although relatively expensive, TL technology enables the collection of significantly increased volumes of data regarding embryo development without interrupting the culture conditions. Associations were reported to exist between embryo morphokinetic parameters and their subsequent implantation potential.5,6 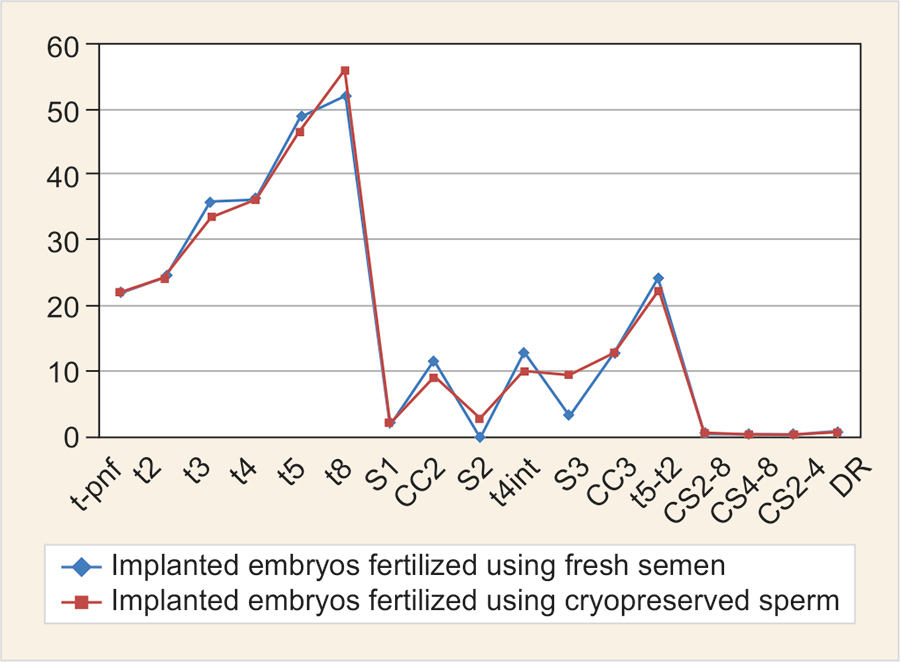 Gardner et al7 propose using a hierarchical predictive model to identify embryos with the highest developmental potential. This model is based on morphological screening, presence or absence of exclusion criteria, timing of cell division to the five-cell phase, synchrony of divisions from the two- to four-cell phases, and duration of the second cell cycle. However, more recent evidence has shown potential issues in the transferability of Gardner et al's7 algorithm between different clinics,8-11 possibly due to different embryo growth rates in diverse settings (i.e., oxygen concentration, culture media, or patient population) in different laboratories. Therefore, it is highly recommended that each IVF laboratory develop its own cut-off values for quantitative parameters based on KID, although methodology maybe adopted from published studies.

The present study is in concordance with results of other studies stating that the morphokinetics vary significantly between embryos with and without implantation potential.12,13

In this study, statistically significant difference was found between t-pnf, t2, t8, S2, S3, CS2–8, CS4–8, CS2–4, and DR of embryos with and without implantation potential when fertilized with fresh semen. Also, when embryos which were fertilized with frozen semen were taken into account, statistically significant difference was found in t3, t4, t5, CC2, S2, t5–t2, CS2–4, and DR. The results are not in complete agreement with the study in which morphokinetics of t-pnf, t2, t3, t5, t8, S1, and t5–t2 were found to be different between statistically implanted and nonimplanted embryos,14 which suggest that human embryo morphokinetics may vary between laboratories. Therefore, TL algorithms emphasizing quantitative timing parameters may have reduced interlaboratory transferability; qualitative measures are independent of cell division timings, with potentially improved interlaboratory reproducibility, which is in concordance with results by Liu et al.11

However, these results are in agreement with the study by Lemmen et al15 who state that the timing and coordination of events during early embryo development (from zygote to cleavage stage) are connected with embryo quality and implantation rate.

It shall be noted that S2, CS2–4, and DR differ significantly in all implanted embryos irrespective of type of semen used for fertilization, which suggest that relative kinetic expressions defining cleavage synchronicity are better predictors of implantation than absolute time points.4

No difference was found in morphokinetics of implanted embryos irrespective of fertilization by fresh or frozen semen, which indicates that embryogenesis events do not get affected by origin of sperm used for ICSI. These results were found to be in concordance with the study by Eastick et al,16 who found that there are no differences in the morphokinetic parameters of early embryo development when either fresh or frozen ejaculate sperm is used for ICSI insemination.

In conclusion, time for specific events, of embryogenesis to occur, varies from other data available, which signify the necessity of each lab to establish their own criteria based on morphokinetics for selection of embryo with greater possibility of implantation. This observational study has shown that there are no differences in the morphokinetic parameters of early embryo development when either fresh or frozen ejaculate sperms were used for ICSI insemination, which confirms the usefulness of freezing for fertility preservation without any adverse impact on events of embryogenesis. Further studies could include embryo monitoring and annotation up to the blastocyst stage with higher sample size.