Impact of Weight Loss on Reproductive Hormones in Obese Men

Materials and methods: Obese men aged 25–40 years (mean age = 32.5 ± 7.5) with BMI more than 25 kg/m2 were recruited for the study. The subjects underwent a weight loss intervention and were followed up for 1-year post intervention. Their semen parameters were checked before and after weight loss.

Conclusion: The study showed that a high BMI at the baseline was associated with low values of serum T and SHBG. FSH and LH were considerably low in morbidly obese men before weight loss. Weight loss was associated with an increase in serum T and SHBG. FSH and LH were not statistically significant after weight loss except in morbidly obese men who showed clear aromatization influence. The hormonal profile among obese men evaluated in this study was characterized by abnormalities in the sex hormones, and weight loss improved some of the hormone levels; however, they were not normalized.

Infertility is defined as the inability to conceive after 1 year of unprotected intercourse. Most of the developed countries are bearing the brunt of high frequency of overweight or obesity.1 In the developing world, the prevalence of overweight and obesity is increasing at alarming rates,2–6 and, in some countries, has reached levels observed in the developed world.7,8 Although overweight and obesity have been demonstrated to affect female fertility,9 there is no consensus on the effects on male fertility and seminal para-meters.10–12 Epidemiologic studies performed at the population level and in infertile couples during recent years suggest that obesity is associated with reduced male fertility, although this effect seems to be modest.13 Male obesity has been linked to subfecundity and an effect–response relationship between increasing BMI and subfecundity has been proposed.14–16 A higher prevalence of obesity in developing countries is associated with the change from rural to urban lifestyle causing decreased levels of physical activity and an increased intake of energy-dense diet. In addition to lifestyle changes, genetics also play a role in increasing obesity in India. India and most of the Asia-Pacific population have a mutation of MC4R genes which put them into the high-risk population.17 WHO has reclassified the obesity limits for Asians/Indians as indicated in Table 1.18

Male obesity has been associated with abnormal semen characteristics,19–26 although results are conflicting.27–33 Obesity has shown to affect the gonadotropin releasing hormone–luteinizing hormone/follicle stimulating hormone (GnRH–LH/FSH) pulse that may impair Leydig and Sertoli cell functions and with the release of sex hormones with a consequent effect on sperm maturation.34 This altered reproductive hormonal profile suggests that the endocrine dysregulation in obese men could explain the increased risk of altered semen parameters.

WHO/IOTF/IASO (2000). The Asia-Pacific perspective: redefining Obesity and its treatment

Obesity and nutritional habits are mainly associated with significant changes in the plasma hormonal milieu, such as a decrease in total and free testosterone levels, decreased gonadotropin levels, decreased the binding capacity of sex hormone-binding globulin, and hyperestrogenemia.35–38 All these alterations might affect the male reproductive system and gamete quality. Previous studies have shown that the endocrine abnormalities may be reversed by weight reduction.39–44 This study aimed to review the changes in semen parameters before and after weight loss in obese males.

Obese men aged 25–40 years (mean age = 32.5 ± 7.5) with BMI more than 25 kg/m2 were recruited for the study. The subjects underwent a weight loss intervention and were followed up for 1-year postintervention.

We excluded two men diagnosed with Klinefelter’s syndrome, and in the analyses of semen characteristics, two with retractile testis and seven men with azoospermia were excluded because azoospermia probably is not caused by obesity alone. The weight loss intervention, based on a healthy diet and daily exercise, lasted approximately 12 weeks. The participants completed questionnaires on their reproductive experience, medical, and lifestyle factors before and after the intervention. Testicular volume was measured by Prader-Orchidometer at baseline by a trained person. The clinical examination was performed on the site by one investigator and included blood pressure by mercurial sphygmomanometer, blood sugar level (Accu-check), height, and weight measurements (Table 2).

The semen volume was estimated by 3 mL Pasteur pipette (Tarsons). Sperm concentration and motility were assessed as described in the “WHO Laboratory Manual” (World Health Organization, 2010). Analysis of the samples was initiated within 1 hour after ejaculation, and, within this time, it has been shown that the sperm motility is stable.45 All the samples were analyzed by using the CASA system (CASA, NIKON Model Eclipse E200) for count and motility supported by the Mackler chamber.

Men with azoospermia and severe oligospermia (<5 × 106) were ruled out for Y-chromosome microdeletions. Then they were subjected to a weight reduction program, which includes diet counseling, exercise, or/and lipolysis for a duration of minimum 3 months. On follow-up after 3 months of post weight loss, screening was repeated for the participants. All the previous tests were repeated once again and the results were compared with their previous results and the difference studied.

Descriptive and inferential statistical analysis has been carried out in the present study.46–49 Results on continuous measurements are presented as mean ± SD and results on categorical measurements are presented in number (%). A p value of <0.05 was regarded as significant. A paired t test was done to evaluate differences across the before and after groups. The Chi-square/Fisher exact test has been used to find the significance of study parameters on a categorical scale between two or more groups.

Data were prospectively collected between April 2012 and May 2015. A total of 213 men were invited to participate, of which 126 men (57%) were recruited. Out of the 126 participants, 21 were excluded according to our exclusion criteria (16%), and the remaining 105 were actually recruited for our weight loss program. 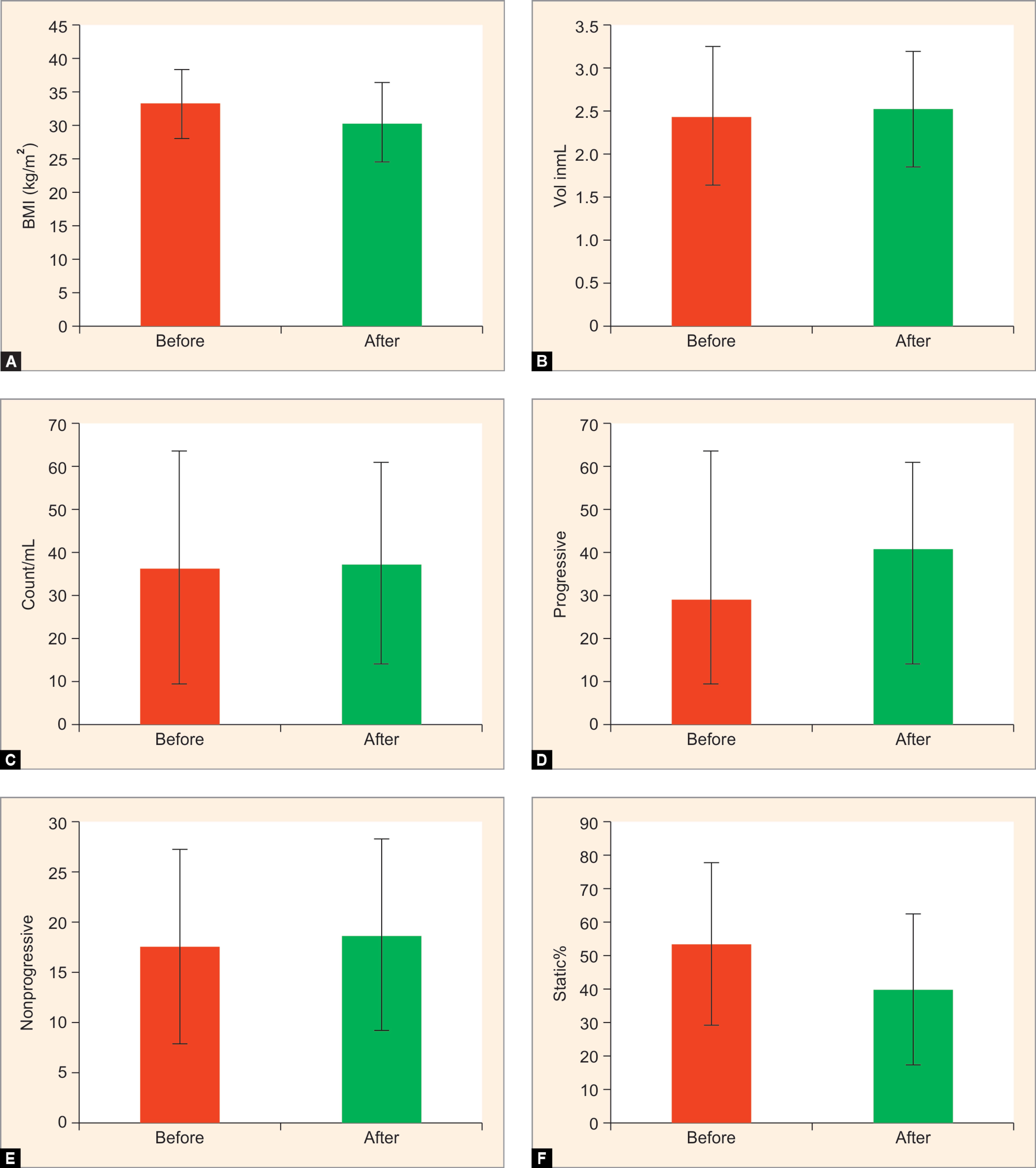 Limited studies have evaluated the effects of weight loss with diet and exercise and its impact on male fertility. Most of the studies have been conducted in a hospital set-up where the chances of infertile obese couples visiting and taking part in research studies are high creating a bias. This study evaluates the effects of obesity and weight-loss interventions in male fertility in the general population.

Our study showed that a high BMI at the baseline was associated with low values of total sperm count, sperm concentration, and motile sperm count. We did not observe statistically significant differences in sperm concentration, volume, or nonprogressive sperm count. Weight loss was associated with an increase in the percentage of progressive motile sperm and a decrease in static sperm percentage among men who participated in a 12-week weight loss program. Our results indicate that there is a causal inverse association between BMI and semen quality, suggesting that it may be possible to improve semen quality by weight reduction. Previous studies have reported a higher prevalence of oligospermia in overweight and obese men than in normal-weight men with a significant association between sperm count and BMI.50

Studies comparing obese and normal normozoospermic men have reported lower sperm counts in the former group.51 BMI has been established to have a negative correlation with a total number of normal spermatozoa.52 Obesity has been implicated to have direct and indirect impacts that could reduce male fertility including decreased sperm motility and increased DNA fragmentation.53,54 Weight reduction among men with obstructive sleep apnea secondary to obesity increased testosterone levels.55 Physical inactivity negatively impacts on erectile function, and exercise interventions have been shown to improve sexual responses. A reduction in caloric intake has also been found to improve erectile function in men with aspects of the metabolic syndrome, including obesity and diabetes.56

Hormonal alterations and diminished sexual quality of life have both been reported to improve after gastric bypass surgery.57 Even though natural weight loss and even gastric bypass have shown promising results in terms of restoring fertility and surgical treatment has been shown to restore reproductive hormones to normal levels, some studies indicate that gastric bypass procedure and the drastic weight loss might induce secondary infertility. One report has described six previously fertile men who lost 60–80 kg after a Roux-en-Y gastric bypass but developed secondary infertility and complete azoospermia ultimately attributed to complete spermatogenic arrest.58

The BMI is a measure of weight in relation to height and does not directly reflect the percentage of body fat. Some of the men with a high BMI may in fact not be obese but have a large muscle mass, which may not be associated with reduced semen quality. Differences in the distribution of confounders such as period of abstinence, smoking, alcohol, diabetes mellitus, and hypertension may influence our finding. We did, however, take into account these factors in the regression analyses and they are unlikely to explain our findings

It should be noted that a few men in spite of losing weight remained overweight/obese after the weight loss program.

To conclude on this study, we observed that the altered androgen profile tend to improve following weight loss and that weight loss may potentially lead to an improvement in semen quality, although we cannot conclude this to be a result of the reduction in body weight per se.

Though a lot of research still need to be carried out to clear the gray area to set up concrete mechanisms involved in the obesity and develop an effective treatment protocol for obese infertile men. However, the available clinical evidence is strong enough for health policies to be implemented immediately in public and private settings regarding preconception counseling and different approaches of treatment for the obese population without further delay. The promotion of weight excess prevention and control, especially through lifestyle therapies, should be mandatory not only for improving reproductive and obstructive outcomes but also for reducing the cost of medical treatment eradicating or treating the secondary diseases with the obesity as the root cause.

8. WHO Consultation on Obesity (1999: Geneva). Obesity: preventing and managing the global epidemic: report of a WHO consultation. Geneva: World Health Organization; 2000.

18. WHO/IOTF/IASO (2000).The Asia-Pacific perspective: Redefining Obesity and its Treatment.