Infertility is emerging as a major health and social concern in modern day India. According to the World Health Organization, overall prevalence of primary infertility in India has been estimated to be between 3.9 and 16.8%.1 Consequently, there has been a mushrooming of centers providing assisted reproduction throughout the country. Due to the great diversity in management protocols and absence of standard operating procedures, there is a necessity to develop country-specific guidelines for assisted reproduction. There is also a need to curb unethical practices. An attempt has been made by the Indian Council of Medical Research (ICMR) in this regard and a draft of assisted reproductive technology (ART) bill was introduced for consideration in 2014. However, it is important that adequate care is taken so that both patients and health workers mutually benefit from ART.

VARIOUS GUIDELINES OVER THE YEARS

Salient features of guidelines and bills over the years

Structure of national board 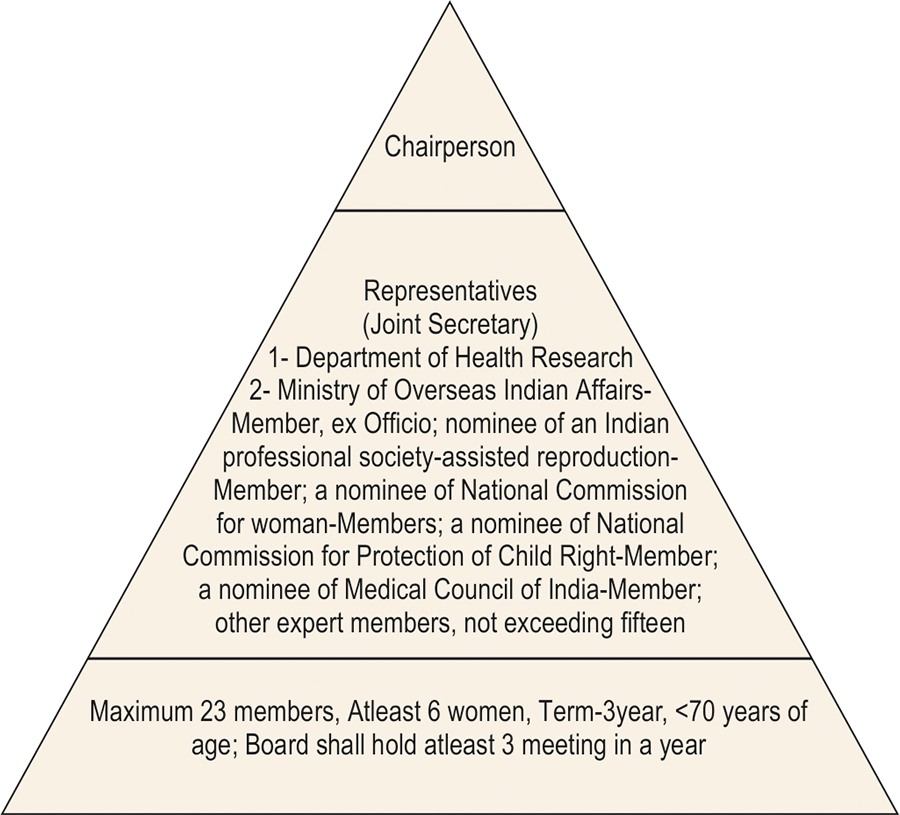 Chapter 3—Procedure for Registration and Complaints

No specific mention of qualifications of treating doctors and embryologists.

The ART bill does not mention anything about human immunodeficiency virus (HIV) discordant couples who want to become parents. This is an important aspect of legislation as patients with HIV or hepatitis B cannot be denied the benefit of assisted reproduction, which will help prevention of transmission of the virus from husband to wife or vice versa while providing the joy of parenthood.

No mention of quarantine for oocyte donors. Ideally even oocyte donors should be tested twice to avoid seroconversion of the recipient in case the donor is in window period.

While uploading the results would help us know the outcomes at each individual clinic and also the number of positive outcomes from a particular donor, especially semen donors, it is unclear as to where should the details be uploaded.

Research should be allowed on any embryo donated for such purposes and not only on embryos with known diseases.

The provision of obtaining just seven oocytes from the donor is controversial, as on the one hand, the Act allows for sharing of oocytes with seven eggs to be given to each party, on the contrary, how is that possible if only seven eggs can be obtained from one donor.

Aadhaar card has been made voluntary. Hence, other proof of identification is to be used.

Chances of critical ovarian hyperstimulation syndrome (OHSS) are low as there is no conception (low human chorionic gonadotropin levels) and gonadotropin-releasing hormone agonist trigger can be used, which is well known to prevent OHSS.

Many couples requiring oocyte donation request to obtain oocytes from their relatives or friends. The present guidelines prevent this but it should be given a second look as social complications arising from such a situation are less because ultimately birth mother is the recipient.

On the one hand, the ART Bill does not allow altruistic oocyte donation; on the contrary, the Surrogacy Bill, 2016 recommends only altruistic surrogacy.

Regulations with Respect to Surrogacy

Unbalanced act: Leave home for the duration of the pregnancy

No specific numbers of abortions or implantation failures to qualify for surrogacy.

Legal implications to the surrogate if she terminates the pregnancy.

Research has shown that in a population of 80,0000, there should not be more than 25 pregnancies from single semen donor in order to prevent inadvertent consanguinity.12 However, instead of keeping a limit on the number of semen samples from a donor, it is more important to document the number of pregnancies.

There cannot be an arbitrary limit of 5 years for cryopreservation. If the couple are willing for birth spacing then this time period can be extended. Also it is important to increase this time limit in case of cancer survivors.

Chapter 7—Rights and Duties of Patients, Donors, Surrogates, and Children

Salient features of Rights and Duties are as follows:

Miscellaneous chapter deals with the dispute and their settlement between national and state boards and/or government.

There are large areas where specific guidelines are yet to come.

Assisted reproductive technology is a technology that has opened new frontiers. Along with bringing new hope to infertile couples across the globe, it has brought in its wake a slew of unethical practices promoted by unscrupulous businessmen seeking to exploit the emotions of such couples. Hence, there is a need to bring this technological revolution under the rule of law. However, the law has to keep pace with the fast developing science. The Indian Bill is already 15 years in the making with still no established laws or accreditation bodies. At this rate, the law will already be obsolete by the time it is passed.

Society viewpoint about newer technologies will always differ depending on moral, religious, and scientific opinions. Hence, it is difficult to please all. The responsibility of ethical practice lies with the ART practitioners. Simultaneously, the law must ensure that physicians are not harried and unnecessarily persecuted in the name of patient rights as this will lead to fearful practice, which in turn will hamper patient management.